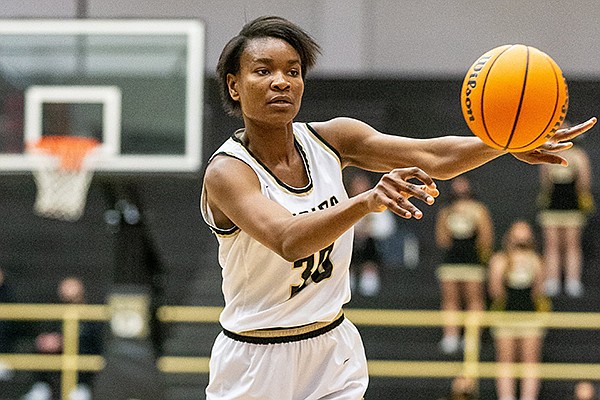 Bentonville's Maryam Dauda passes the ball during a game against Rogers on Tuesday, Jan. 19, 2021, in Bentonville. (Photo by David Beach, Special to the NWA Democrat-Gazette)

Five-star Bentonville center Maryam Dauda (6-4) announced Friday she will play her college basketball for the Razorbacks. Dauda previously signed with Baylor, but was granted a release from her national letter of intent after former Baylor coach Kim Mulkey was hired at LSU last month.

Dauda told the Northwest Arkansas Democrat-Gazette two weeks ago that she would wait to make a decision about her future college plans until Baylor named Mulkey’s replacement, following a celebration with her high school teammates for her being named McDonald’s All America team. Baylor hired Atlanta Dream coach Nikki Collen to take Mulkey’s place on May 3.

Dauda and Arkansas signee Jersey Wolfenbarger (6-6) of Fort Smith Northside were named McDonald’s All-Americans and among the 10 finalists for the Naismith Girls Player of the Year.

In addition to Dauda and Wolfenbarger, Arkansas will add Oregon State transfer Sasha Goforth, a 2020 McDonald's All-American from Fayetteville.

“I think the analogy is going to be that (Dauda) is the last piece of the puzzle and I don’t think we can get away from that,” Neighbors said. “We needed a big and this is the first kid like this to come of the state since (former Fort Smith Southside and Vanderbilt star) Wendy Scholtens.

“To have her join the rest of this group, it looks like a puzzle with a missing piece and she fits right in there and it’s not only our roster, but what you have to have to win in the SEC. She’s also a great kid, another Arkansas kid that solidifies all of that over the last three or four seasons — lot of impact.”

Dauda set records left and right as a Lady Tiger, finishing as the career leader in points, rebounds and blocked shots along with other categories. She finished with 1,401 career points, 339 blocked shots and 867 rebounds.

She suffered a knee injury late in her senior season. Dauda had surgery on March 19 and said her rehab has gone well.

Wolfenbarger is ESPN’s No. 7 overall player in the 2021 class. Dauda is the nation’s top center and 13th-best in the country, according to ESPN.

“What you see in Maryam is very unique,” Neighbors said. “She is a kid with size that can pass it, handle and make free throws. She shoots 85% from the free throw line and has a gorgeous release.

“She changes the game in the paint on defense and that’s an area we have struggled against the best teams in our league.

“We got by and got to the middle of the pack with what we were able to put on the floor, but now there is not going to be a gym we walk into where we are not on the same level height-wise and skill-wise.”

Wolfenbarger said she was thrilled by Dauda's decision.

“I said from the beginning that my dream team would include one of my closest friends, but I thought it was just that — a dream,” Wolfenbarger said. “Now it’s reality and I couldn’t be more thrilled. As a friend, I couldn’t be more proud of everything she’s accomplished, and as a teammate I can’t wait to embark on this journey together.”

The new Razorbacks will join Elauna Eaton of Nettleton on the Arkansas campus. Eaton was injured and missed last season.

“They don’t have to go outside of our borders to play with the best and against the best,” Neighbors said. “We have proven that we will line up and play anybody, anywhere. If all those kids are looking at each other with big eyes for big things, then I’ll be disappointed. I know we are and I know they are, too.”

Dauda began playing basketball in the sixth grade when her family moved from Nigeria to Bentonville.

“She didn’t start playing basketball too long ago and she has been around great coaches in (Bentonville coach) Tom (Halbmaier) and (AAU coach) Nick Bradford," Neighbors said, "so she has not built any bad habits. I think her best basketball is still ahead of her.”

Arkansas is coming off a season in which it notched huge wins over Baylor and Connecticut. The Razorbacks, who finished ranked No. 15 in the final Associated Press poll, earned their first trip to the NCAA Tournament since 2015 and grabbed a No. 4 seed, but they were upset by Wright State in the opening round and finished 19-9.