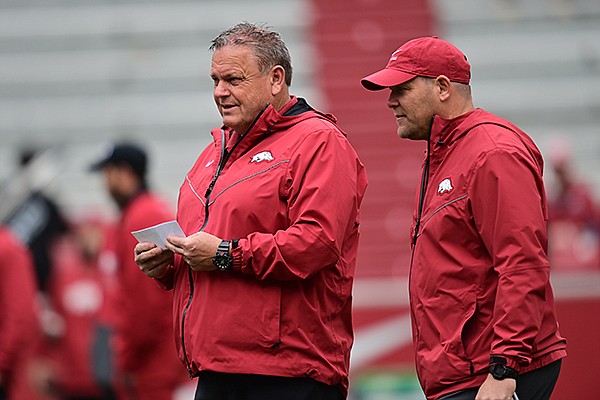 Most Hawgs Illustrated subscribers will tell you that the best issue of the year comes at the end of May. Our June magazine is our Football Preview.

It’s stuffed with player features. It’s what we’ve done best over the last 29 years. For what it’s worth, our magazine began its 30th year on April 13th.

I love this year’s Football Preview, one of our best. It gave me a chance to visit – by Zoom, of course – with Grant Morgan, Jalen Catalon and Trelon Smith. If you are the boss, you get to cherry pick from the team’s best interviews.

It’s pretty cool when they also are among the best players, too. These fit that.

It seems like I’ve been interviewing a Morgan for most of the last decade. It doesn’t get much better as far as engagement from a player.

I keep accurate notes, bordering on short hand. But I can’t keep up with a Morgan. You better have a recorder.

This session was no different. Among the best lines this year was Morgan’s promise that the 2021 Razorbacks would be much improved “with no jagged edges.” I’d never heard that phrase mentioned in regards to a football team, but it makes perfect sense.

Among the other tidbits from Morgan, there is “no finesse” in coach Sam Pittman’s second team. Along those lines, defensive coordinator Barry Odom said, “We look like a different team than last year and that’s good.”

Offensive coordinator Kendal Briles and Odom went through the depth chart in detail in one of my favorite features of our June magazine: player assessments.

Odom’s comment was interesting about the way they cross trained the back end of the defense. It’s something they did last August because of covid-19 fears.

It worked so well, he said, “Why don’t we do it every year?” So he did again this spring. They learned that several players were extremely versatile. He provided the breakthroughs over the last few practices as that shuffle progressed, most notably Malik Chavis’ ability to play the nickel back.

There’s a feature on the secretive hunt for a Rock-ola jukebox by Judy Henry, Pittman’s agent, for her client’s birthday. It was a present from her law partners.

Dudley Dawson breaks down the high school football talent in the state for next year with his pick of the top 33 players. It’s clearly one of the best years and it’s top heavy with great offensive line prospects. Many have already picked the Hogs.

Scottie Bordelon’s interview with star wideout Treylon Burks, popping up in early mock drafts as a probable first-rounder next spring, was a treat. Burks comes across as humble as he is talented.

“It ain’t all about talking all the time, showing people what you do,” Burks said. “You go do it, people will see it. I’ve carried that on with me, and I’ll teach that to my kids one day. I just keep that in mind.”

You aren’t going to catch Burks looking ahead at a possible NFL destination.

“I’m still not there yet,” Burks said. “I still have to improve. I’m still with the Arkansas Razorbacks, so why would I think about being with another team when I’m with one already?”

Catalon, one of several talented safeties on this team, is more talkative than Burks, but his mention of team goals ahead of personal accomplishments is refreshing.

Odom rightly noted that Catalon has a chance to be one of the school’s all-time greats and has another gear from what was on display last season.

“As good as he played last year, I think he just barely scratched the surface of what he’s going to be for us,” Odom said. “I’ve coached a lot of really good players. He might be the best when he’s done. He wants to leave his mark here and not just as an individual. He wants to win. That’s more important than anything to him.”

All of this will be included when Volume 30, Issue 7 goes to the printer in about 10 days. It will be a sparkling 80 pages of high-gloss photos and classy features.

There are assurances from Briles that quarterback KJ Jefferson is the type of leader and talent needed to run this offense. Briles sees improvement throughout the offense.

Failures on first and second down made it tough to consistently make first downs. Improvement in that area is coming.

That Jefferson can be an effective runner in the run-pass option isn’t really the key, Briles said. It’s consistency in the proper reads.

“Before you can be a threat as a runner (at quarterback), you have to be a threat in the operation of the offense,” Briles said. “The guys who are good at RPO make the correct read. When that happens it’s easy to predict a good outcome.

“We may not really call a lot of runs for our quarterback, but you get them because they can create plays for themselves.

“In this league, you are going to miss a block. Defenders are that talented. But with the kind of quarterback we have – all talented dual threat guys – you can have a missed block and still get to second-and-4 instead of second-and-14.

Briles thinks much is changed about the offense. The lack of production on third down has been a constant theme no matter where Briles has gone. It should change.

“During the spring when we’ve been out walking the dog or at the baseball fields with the kids, the lack of tempo was something that comes up,” he said. “We do want to play fast. But we didn’t last year. There just wasn’t much tempo or rhythm.

“It’s totally different now. We’ve got everything in for our scheme. Our players know it. It makes all the difference when you get a chance to install it in the spring.

“We are so far along now. When we come back after the summer workouts and get to fall, we will be ahead of the curve.

“I know you should be great in your first year. It’s just hard to do that. We like where we are now in our second year, much better. Coach Pittman and everyone on our staff has done a great job of putting us in position to get so much done this spring.”

The jagged edges are gone.