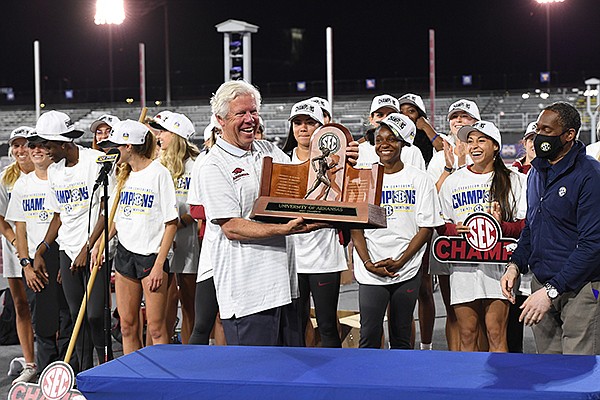 The University of Arkansas women’s track and field team continues to dominate the SEC.

Arkansas won the title at the SEC Outdoor Championships on Saturday night in College Station, Texas, for its 20th title in the conference’s last 21 competitions in cross country, and indoor and outdoor track and field.

“We might be a bit greedy,” Razorbacks Coach Lance Harter said with a laugh. “But it never gets old winning SEC championships.

“With the coaching staff that we have and the way we recruit, we just try to find kids that want to be great and have a lot of competitive drive and very much of a team-oriented spirit.”

The only SEC team to win a conference championship in cross country, indoor and outdoor track and field during the Razorbacks’ reign is Florida, which won the 2018 outdoor title.

The Razorbacks regained the lead with 18 points in the 5,000 and held on to win when the 1,600 relay team of Paris Peoples, Morgan Burks-Magee, Shafiqua Maloney and Tiana Wilson finished fourth in 3:29.38.

“I told the kids at our team meeting this morning, ‘Ladies, with us and LSU and Alabama, it’s going to come down to the final events — the 5,000 and the relay. I’m sorry, but that’s just reality,’ ” Harter said. “They just smiled and said, ‘OK, we accept the responsibility.’

“We knew that the 400 hurdles and the 200 were LSU’s big weapons, but that the 5,000 and relay were our aces at the end. Our kids rose up and took care of business and we were able cash in.”

Izzo also took second in the 10,000 on Thursday night.

“Katie’s coming on like gangbusters,” Harter said. “A lot of people have been scratching their heads asking where she’s been?

“We took a deliberate break after the indoor season to freshen her up a little bit. Now we’re starting to see the Katie Izzo of old. She’s running very well.”

“Tiana was a workhorse for us all weekend,” Harter said. “But she’s a kid that is just going to give it her all, and she’s very much a team player.”

Arkansas had two individual champions Friday night when sophomore Nastassja Campbell cleared a personal-best 14-10 3/4 to win the pole vault, and Gear set school and SEC meet records in winning the 3,000 steeplechase in 9:38.62.

“The kids really rallied around each other,” Harter said. “I think across the board we all were elated with the overall team performance.”