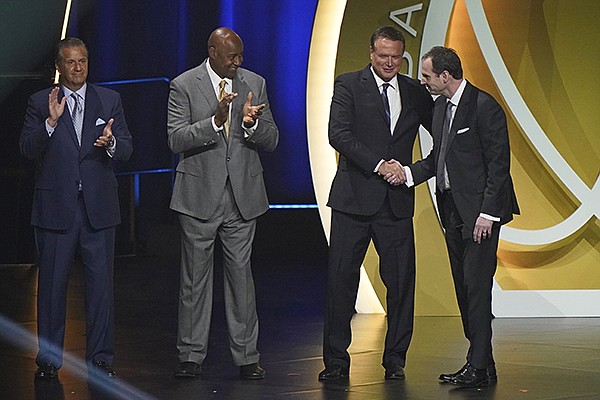 Sean Sutton, right, son of Eddie Sutton, shakes hands with Kansas coach Bill Self, Kentucky coach John Calipari, left, and Sidney Moncrief after his father was enshrined as part of the 2020 Basketball Hall of Fame class, Saturday, May 15, 2021, in Uncasville, Conn. Moncrief played at Arkansas while Eddie Sutton coached there. (AP Photo/Kathy Willens)

Eddie Sutton’s trek to the Naismith Memorial Basketball Hall of Fame came to an end Saturday.

Sutton, who died in May 2020, was posthumously inducted into the hall during a ceremony in Uncasville, Conn. Sutton was elected to the hall shortly before his death, but the 2020 class — which included basketball legends Kobe Bryant, Tim Duncan and Kevin Garnett — had a delayed induction due to the covid-19 pandemic.

Sutton was a finalist for the hall of fame seven times before he reached the 75% voting threshold required for enshrinement. The Naismith Hall of Fame is considered the highest individual lifetime achievement in basketball.

“Today is a special day for the Sutton family,” said Sean Sutton, the second of Eddie Sutton’s three sons, during a pre-recorded speech that played during the ceremony. “My brothers and I are honored to be here and share this moment with our families. We had hoped and prayed that this day would come, that our dad would finally get inducted into the coveted Basketball Hall of Fame. We are so grateful that he was alive to get the call, grateful we were there to see the excitement on his face, but sad he isn’t alive to give this speech. He would have done an amazing job.

“My dad loved the game of basketball and embraced the history of the game. His teams were tough, disciplined and known for playing great man-to-man defense. He was a tremendous motivator and his teams always played hard.”

Sean Sutton was joined on stage by hall of famers Sidney Moncrief, John Calipari and Bill Self, who served as Eddie Sutton’s presenters.

“It gave my dad great joy to know his coaching accomplishments were recognized by his peers who he respected and loved,” Sean Sutton said.

Eddie Sutton won 804 career games and 10 regular-season conference championships in his career and was the first coach to take four schools — Creighton, Arkansas, Kentucky and Oklahoma State — to the NCAA Tournament. He was elected to the College Basketball Hall of Fame in 2011.

“The thing that impresses me is the excellence in any program he puts his hands on,” said former NBA and college coach Larry Brown during a video presentation. “If you look at most of the places he went, they were able to win right away.

“If you look at his body of work, look at the coaches he turned out that worked for him — he’s just had an amazing imprint on our game.”

Moncrief said Sutton was “critically” important to the success of Arkansas’ basketball program. Sutton coached the Razorbacks for 11 seasons from 1974-85 and compiled a record of 260-75.

“He coached us to play at a higher level because he coached us up,” said Moncrief, who was inducted into the Naismith Hall of Fame in 2019.

Moncrief, Sutton and Nolan Richardson (2014) are the only individuals with ties to the Arkansas program who have been inducted into the Naismith Hall of Fame.

Sutton is best known for a 16-year renaissance at his alma mater Oklahoma State, where he coached from 1990-2016.

“My dad loved every place he coached, from his first job at Tulsa Central High School to his alma mater Oklahoma State, and his final job on the road to 800 wins at San Francisco,” Sean Sutton said. “From playing against Wilt Chamberlain to coaching against Michael Jordan and Larry Bird, competing against Phi Slamma Jamma and the Fab Five, he was fortunate to experience five historic decades in the game of basketball.”

The floor at Oklahoma State’s Gallagher-Iba Arena is named for Eddie Sutton. He played college basketball for Henry Iba, and restored the Cowboys as a national player after the program had fallen dormant in the decades following Iba's retirement.

The 1995 Oklahoma State team was the school's first to play in the Final Four in 44 years.

“Mr. Iba had a huge impact on his career and on his life,” Sean Sutton said. “The foundation of my dad’s programs were built on the same principles and beliefs he learned from playing for Mr. Iba.”

Sutton’s professional success was sometimes overshadowed by off-court news, notably alcoholism and an NCAA investigation into Kentucky’s program while he was the Wildcats’ coach in the late 1980s.

Four years after leaving Arkansas, Sutton resigned under pressure at Kentucky in 1989 amid the NCAA investigation into the Wildcats’ recruiting, which led to a postseason ban for the program. Sutton was not named in the NCAA’s report on its findings at Kentucky.

In 2001, Sutton was roundly praised for leading the Oklahoma State program through tragedy after a team plane crash killed all 10 passengers as it traveled home from a road game in Colorado.

Sutton resigned at Oklahoma State following a DUI citation in 2006.

“My dad’s life had hills and valleys, both personally and professionally,” Sean Sutton said. “He did not run from them. He faced his challenges head on and he faced them with honesty.”

“Coach Sutton is what coaching is all about on the college level,” Moncrief said. “We were all better basketball players and better people because we were able to learn under the great coach Eddie Sutton.”