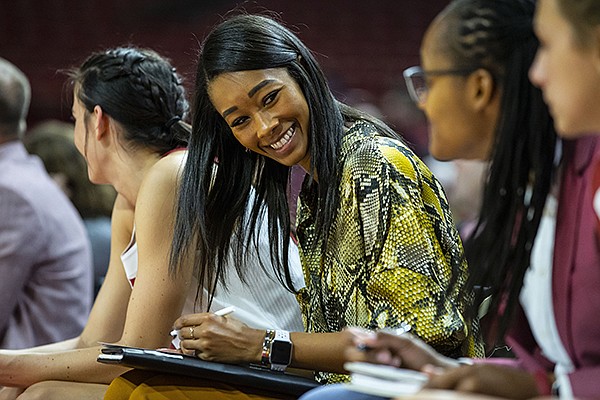 Arkansas assistant coach Lacey Goldwire is shown during a game against Arizona State on Sunday, Nov. 18, 2018, in Fayetteville.

Lacey Goldwire is returning to the University of Arkansas as an assistant coach on Mike Neighbors’ staff.

She was an assistant coach from 2017-19 but left to be an assistant at the University of Tennessee. Goldwire returns to Fayetteville after two seasons in Knoxville.

Goldwire’s role on the staff will be similar to what it was in the past, Neighbors said.

“Lacey will continue to do exactly what she did for us in the past, really impact recruiting, will impact on the court,” Neighbors said. “Her fingerprints are already all over everything we’ve done — the roster she was able to help us assemble and the community support we were able to rally.

“She will be heavily involved in all aspects of the program.”

It’s her ninth season full-time and 13th overall in coaching, which also included stops at Oklahoma State, Morehead State and Iowa. The Oklahoma City native played at East Central (Okla.) University and ranks as the fifth leading scorer in school history with 1,340 points.

Neighbors said Osahor got the opportunity to enjoy an expanded role at OU under new coach Jennie Baranczyk. Osahor was a graduate assistant for her at Drake.