Hogs aim to use '19 postseason as lesson 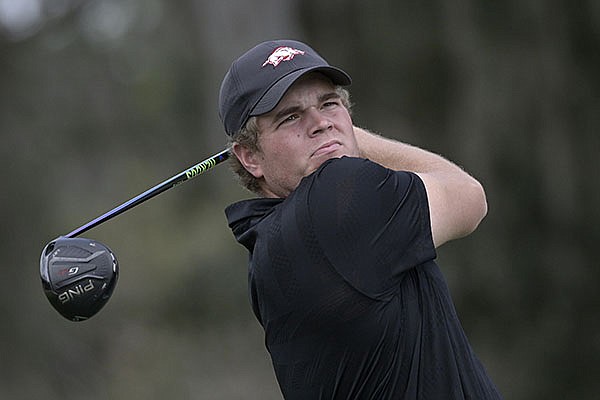 The lesson learned from college golf’s last postseason should serve as a spur for the University of Arkansas men’s team this week at the NCAA Kingston Springs (Tenn.) Regional.

The No. 22 Razorbacks tee off today at 8 a.m. on the No. 10 tee with San Diego State and Virginia at The Golf Club of Tennessee. The top five teams after 54 holes at six regional sites will comprise the field for the NCAA Championships on May 28-June 2 in Scottsdale, Ariz.

The 2019 Razorbacks were coming off the high of winning the SEC match-play championship over Auburn when they failed to move on from the NCAA Austin Regional as the first team out of the cut.

“I think we’ve learned a lot from it,” Arkansas Coach Brad McMakin said. “Maybe a little overconfident going into regionals.

“Regionals is very tough to get through. It’s a one-week shot getting into the finals, and you know it’s a crazy game.”

Said senior William Buhl, “In golf, every shot does count. … so we know that and know what we went through and honestly how heartbreaking that was. We did not play good through the final holes. I don’t think any of us … want that feeling back in our stomachs.”

The Razorbacks sport one of the most veteran teams in the nation, led by super seniors Buhl and Tyson Reeder, juniors Julian Perico and SEC individual champion Segundo Oliva Pinto and freshman Manuel Lozada. Senior Mason Overstreet, who teamed with Buhl, Perico and Reeder on the 2019 team, will serve as the alternate.

Arkansas, the No. 5 seed in Kingston Springs, fell to Vanderbilt 3-2 in the SEC match play two weeks ago and the two SEC squads will be matched up again at the regional. Pinto went 3-0 in SEC match play, while Buhl and Lozada each won two matches in St. Simons Island, Ga.

“We’re in a great spot,” Buhl said. “The confidence buzz around the team is very high. Getting back to the championship in the SEC finals is a huge deal and very hard to accomplish.”

Perico, who recently earned a spot in the Palmer Cup for the International team, said the team has practiced well since their deep run at the SECs.

“We’re putting some good numbers out there right now,” Perico said. “I think we’re gonna do good. Again, it’s just a very hard competition. People really don’t understand how hard it is, just to make it to the national championship in men’s golf.”

The Razorbacks have not played The Golf Club of Tennessee, which is located southwest of Nashville, but McMakin said it should have a familiar feel.

“Sometimes as a coach you feel good where you go and it feels comfortable,” McMakin said. “I feel really good about going to Nashville. The terrain is very similar to Arkansas. It’s in the mountains, and I just know when we were there I felt the team was comfortable.

“I felt good about it. Looking forward to going back out there and playing on the same [zoysia] turf we practice on. I think it’s going to be a good week for us.”

There will be a strong Atlantic Coast Conference presence in the field, led by top seed and No. 3 Clemson and No. 10 North Carolina State. The No. 13 Commodores and Razorbacks are the third and fourth seeds.