Razorbacks on outside of cut after first day 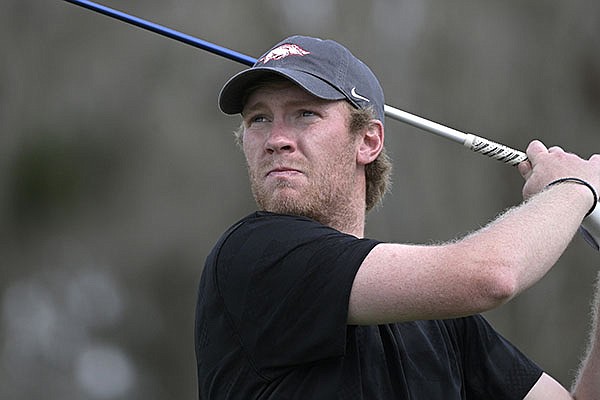 Seniors William Buhl and Tyson Reeder shot matching 69s, and junior Julian Perico had an eagle down the stretch to lead the University of Arkansas to a 1-under 283 after the opening round of the NCAA Kingston Springs (Tenn.) Regional on Monday.

The No. 24 Razorbacks are in sixth place, six shots behind co-leaders No. 10 North Carolina State and Kent State on the par-71 layout at The Golf Club of Tennessee in suburban Nashville. The top five teams from each of the six NCAA regionals will move on to play at the NCAA Championships in Scottsdale, Ariz., starting May 28.

SEC champion and No. 13 Vanderbilt is in a third-place tie with Houston at 5 under, and San Diego State rounds out the top five at 3 under.

No. 3 Clemson, the top seed at the regional, carded a 3 over for seventh place, followed by UNC-Charlotte and Virginia at 5 over.

Buhl and Reeder had vastly different rounds, but both wound up at 2-under 69 and in a tie for eighth place to lead the Razorbacks, who started the day on hole No. 10.

The individual leader is Vanderbilt’s Reid Davenport, who had a bogey-free 6-under 65, one stroke ahead of North Carolina State’s Maximilian Steinlechner.

Buhl had four birdies in a span of six holes and made the turn at 3 under and right off the lead. He gave it back with a bogey on the par-3 fourth and double bogey on the par-4 sixth, but regrouped to birdie Nos. 7 and 9 to finish his round.

Reeder had a steadier day, with five birdies and three bogeys, though he also finished strong with birdies on Nos. 4 and 5 followed by four consecutive pars.

Perico made the turn at 1 over, but he tripled the par-4 third hole to fall back to 4 over. He immediately birdied the fourth, then carded his eagle on the 526-yard seventh hole to get back to 1 over. Perico birdied the ninth to complete his round at even-par 71 and a tie for 19th.

Arkansas freshman Manuel Lozada birdied his second hole but had four bogeys and 13 pars the rest of the day for a 3-over 74 and a tie for 47th.

SEC individual champion Segundo Oliva Pinto struggled to a nonscoring 10-over 81. The junior had a triple bogey and a double bogey and did not manage a birdie.

Vanderbilt’s Matthew Riedel had a bizarre round countering two eagles on par 5s with one double bogey and four bogeys for a wild 73.