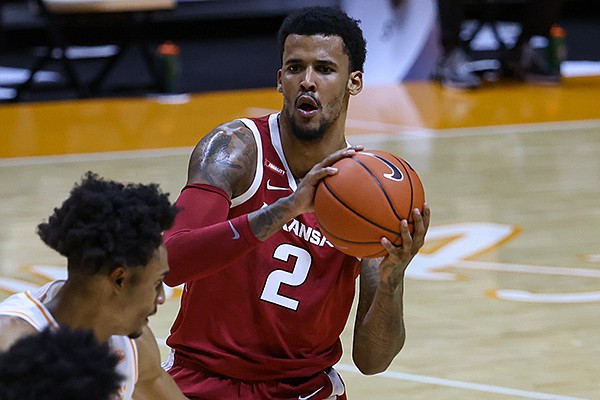 Vance Jackson’s college basketball career will continue, but not at Arkansas.

Jackson, who signed with the Razorbacks last spring and played in 26 games during the 2020-21 season, is entering the transfer portal, he announced Tuesday. He will take advantage of the extra year of eligibility provided by the NCAA because of covid-19.

“After talking to my family I have decided to use my extra year and enter the transfer portal to complete my masters as well (as) pursue my dream,” Jackson wrote.

A Pasadena, Calif., native, he began his college career at UConn before transferring to New Mexico, where he played two seasons. Jackson earned a start in three games at Arkansas and averaged 11.6 minutes per game, down from 27.5 with the Lobos.

He did not play in five of the Razorbacks' six postseason games and did not play more than nine minutes in any game the final two months of the season.

Jackson, who averaged 3.8 points and 2 rebounds per game, scored in double figures four times last season, including 15 in wins over Mississippi Valley State in the season opener and Georgia on Jan. 9.

He added 14 points and 9 rebounds in a loss at Tennessee. For the season, Jackson shot 35.4% from three-point range on 65 attempts.