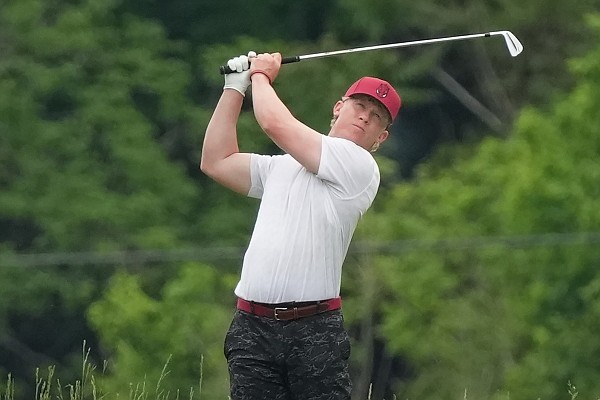 Tyson Reeder shot a blistering 6-under 65 to lead the No. 24 University of Arkansas men’s golf team to a second place finish at the NCAA Kingston Springs (Tenn.) Regional on Wednesday.

The Razorbacks posted a team score of 7-under 845 to move on to the NCAA Championships, which start on May 28 in Scottsdale, Ariz. No. 13 Vanderbilt won the regional at 18 under par, fueled by a region-best 9-under 275 on Wednesday.

Each of the top 5 seeds moved on from the regional, played on the 7,107-yard par 71 course at The Golf Club of Tennessee in suburban Nashville. Fifth-seed San Diego State (-5), top seed and No. 3 Clemson (-3) and second-seeded and No. 10 North Carolina State (-3) were the other advancers.

San Diego State’s Puwit Anupansuebsai won medalist honors with an 8-under 205, but only after Reeder made a stiff challenge on Wednesday.

Reeder had a fantastic finishing round, which featured an eagle on the par 5 7th to go along with five birdies to break the Arkansas single-round postseason record. A birdie on the par 5 17th hole pulled the graduate senior from Edmond, Okla., into a tie for first place before he finished with a bogey, his first hole above par since midway through the second round.

Reeder’s 206 is an Arkansas regional record by two strokes. He became the fifth Razorback to finish runner-up at an NCAA regional, joining the Pappas brothers Brenden and Deane in 1991, Deane Pappas in 1992 and Austin Cook in 2013.

Vanderbilt’s William Moll was third at 6 under, followed by a three-way tie at 5 under between Vanderbilt’s Reid Davenport, San Diego State’s Youssef Guezzale and Clemson’s Turk Pettit.

Arkansas senior William Buhl entered the final round in a tie for third place. He shot a 71 on Wednesday, his third round at par or better, to finish at 4 under and tied for seventh.

Arkansas junior Julian Perico bogeyed two of his final three holes and wound up at 1-over 214 for the tournament and tied for 24th. Junior Segundo Oliva Pinto provided the Razorbacks’ fourth counting score with a 2-over 73 on Tuesday and tied for 57th.

Freshman Manuel Lozada, who had counting scores the first two days, fired a 74 on Wednesday and tied for 39th.