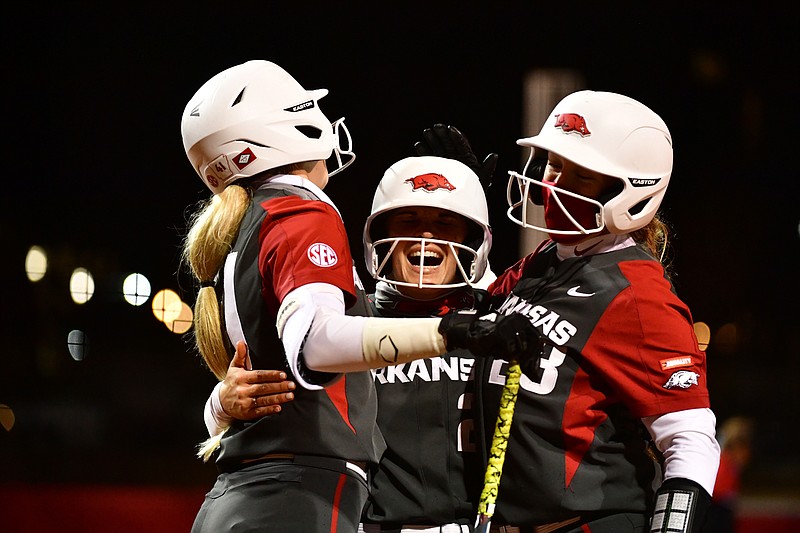 FAYETTEVILLE — University of Arkansas softball coach Courtney Deifel preached to her team from the beginning of this season that handling adversity — especially with the pandemic — would be a key to success.

Deifel couldn’t be more pleased with the way the Razorbacks navigated every twist and turn to claim a share of the SEC regular-season title and earned the right to host an NCAA regional for only the second time in school history.

“It’s been our mentality from the start, through the fall and start of our season,” Deifel said. “I told them ‘Hey, we’re gonna have to handle what’s thrown at us.’

“The main focus of that was not knowing what covid was gonna throw at us but also what the game can throw at you as far as weather.

“But they’re tough. They’re resilient. I told them this, and I’ll stick to it. I think we’re the toughest team in the conference.”

The Razorbacks have leaned on each other throughout a litany of hardships from injuries to travel issues to host the first game of the Fayetteville Regional at noon on Friday at Bogle Park.

Third baseman Hannah Gammill is a great example. The freshman from Beebe missed a month with a broken bone in her hand, but Deifel said the doctor initially told her she would be out for six weeks. Gammill worked tirelessly and was back in four.

“She had her mind made up what she was going to,” Deifel said. “Sometimes the body is needing to heal and sometimes it’s just your mindset of how you approach something and making the most of it. Her first day back, I think, was Missouri State and she went 3 for 3 with a home run.

“It was kind of a beyond-her-years way of handling the injury. It’s not to say she wasn’t disappointed. She was crushed. And then she found a way to make herself better in that time so that she was ready to go for herself and her team when it was time.”

Gammill is one of several Razorbacks to miss time. Outfielder Hannah McEwen, a preseason All-SEC selection, was out 10 games under covid-19 protocols. First baseman Danielle Gibson missed four games because of a concussion. Pitcher Autumn Storms got off to a slow start because of a back problem and has been rested lately because of an undisclosed ailment.

Even Braxton Burnside, who is tied for second in the country with 24 home runs, missed a couple of games — including the Razorbacks’ 1-0 loss to Tennessee in the SEC Tournament.

But the Razorbacks (40-9) had different players come up with big plays throughout the season. They lost back-to-back games only once and enjoyed winning streaks of 19 and 12 games.

Nicole Duncan and Valerie Ventura split time at third when Gammill was sidelined. Sam Torres caught fire when McEwen was out and was bumped from the bottom of the batting order to the top. Freshman pitcher Jenna Bloom has given Arkansas key innings when Storms and Mary Haff weren’t 100%.

In addition, Keely Huffine has played different positions throughout the season depending on need. She’s bounced around the infield at times and also started in the outfield earlier in the season.

Deifel said the group has maintained a team-first mentality.

“It’s just how you handle it,” Deifel said. “If you feel you’re in it for the right reasons. This team knew that it was gonna take everybody in order to be successful.

“When you go into a year and you’re just not sure what to expect, then you just put your trust in the people around you. And we knew that we have the right group to weather any storm thrown at us.”

Catcher Kayla Green, one of four Razorbacks who were contributors on the 2018 team that won a regional, said this year’s team has more depth.

“People are always ready to take advantage of their opportunity,” Green said. “That inner competitiveness in everybody is what has kept us going. They just don’t miss a beat. We have someone come in and do that job.”

Gammill said her teammates and her faith helped her through her first major injury as an athlete.

Gammill was a 16-year-old sophomore in high school the last time the Razorbacks hosted a regional, but she was watching on TV when third baseman Autumn Buczek made a diving catch to secure the final out and and send Arkansas to its first super regional.

“Oh, I’ll never forget that moment,” said Gammill, her voice filled with emotion. “They had it playing for the hype video at the beginning of the season. It just gives me chills every single time knowing I’m a freshman and I’m here now.”