5 breakout candidates for Arkansas football in 2021 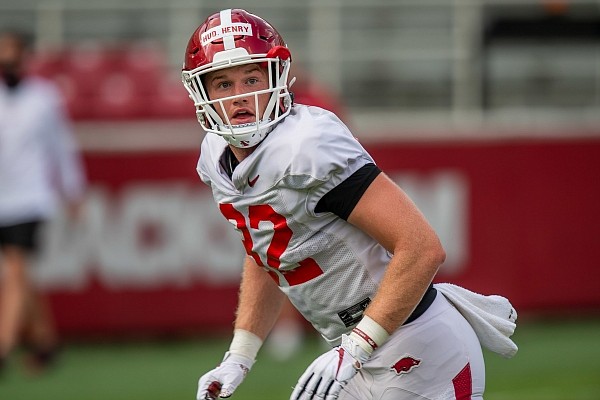 Each year, a player or multiple players who may have been flying under the radar entering the season seemingly puts it all together and contributes in critical ways.

For Arkansas in 2020, receiver De'Vion Warren stepped up on the offensive side of the ball and was having a breakout season prior to an ACL injury. Here are five candidates who could have a similar burst-onto-the-scene type of year in 2021:

After feeling his way through the 2020 season and earning a start against LSU toward the end of Arkansas’ SEC-only schedule, Carter was overcome with a sense of belonging.

The 6-3, 300-pound tackle believes he can compete and more than hold his own against high-caliber offensive linemen and is a fit in the conference.

The former Mansfield (Texas) Legacy standout’s numbers last season don’t jump off the page. He finished with 11 tackles, which was sixth most among the Razorbacks’ defensive linemen. But included in his statistics were confidence-building moments and games, particularly against Georgia (2 tackles), Tennessee (3) and LSU (3).

It was a significant stepping stone for Carter, who spent the 2019 season on the Razorbacks’ scout team and did not travel to road games. Sam Pittman pointed to the lineman as a player who stood out in spring drills and made individual strides.

Arkansas center Ricky Stromberg, who faced off with Carter often during team work, commended him for the manner in which he used his hands as a weapon. Carter’s work with his hands gives way to getting extension on his matchup and shedding blocks to make plays.

“I love to try to work with my hands,” Carter said this spring. “You can’t do nothing without your hands, so I try to slow my processes down and think about bringing my hands to the fight. Every time I come off the ball I think of it as a fight.

“I’m still working on it. I’m not where I want to be, but I continue to work on it.”

Last season, Carter noted his weight was in the 280-pound range and that he lowered his body fat percentage. His weight is now around 300 pounds, understanding he needs to be more stout to make an impact up front in the SEC.

Despite Arkansas adding a pair of defensive tackles from the NCAA transfer portal this spring in Markell Utsey (Missouri) and John Ridgeway (Illinois State), Carter has a chance to come into his own in the fall.

The door is open for Knox, a consensus four-star prospect out of high school, to step into the No. 2 receiver role for Arkansas following the spring departure of Mike Woods.

Knox was genuine and honest during spring drills when discussing his down statistical year in 2020, admitting he battled a loss of confidence. He caught seven passes for 70 yards over 10 games after a freshman season in which he was tied for third on the team in receptions (28), third in receiving yards (385) and tied for second in touchdowns (3).

In terms of picking up the offense last season, Knox said he was overthinking the game on the field rather than trusting his instincts and ability. In the spring, he felt as if he was finding himself again and playing fast.

His spring focuses were becoming more sure-handed, explosive and creating separation at the top of his routes against man coverage.

According to SECStatCat, a website dedicated to SEC football analytics, Knox gained 31 yards on a pair of receptions off slant routes, and 18 yards on two grabs on tunnel screens. He also had one catch for 10 yards on a hitch and one for nine yards on a curl. Forty-nine of Knox’s 70 yards came after the catch.

Because receiver Treylon Burks attracts a great deal of attention on the perimeter, that alone could lead to a significant increase in targets for Knox, who has shown he can be problematic for opposing defensive backs when locked in — 20 career catches vs. SEC competition.

His experience, too, is valuable for a relatively young receiving corps.

Should Knox enter the fall in the right frame of mind — indications from the spring are that he will — then he can be one of quarterback KJ Jefferson’s top options and put together a second breakout season.

It can be a challenge for freshmen to make an immediate impact, especially in the SEC, but Sanders is rich with potential and talent, though it may be raw. Regardless, Sam Pittman believes he has a player who can be special.

Arkansas placed Sanders at running back from Day 1 and he appears to be a solid fit at the position. At 6-2, 220 pounds, he looks the part physically and runs with an intriguing mix of power and elusiveness.

What will expedite him having a greater role in his first college season is learning the intricacies of pass protection. Pittman noted in the spring that physicality is not an issue. It’s understanding protections.

Sanders is a hard worker and “very meticulous,” Pittman said, in how he handles his business, which is encouraging and a sign that he hit the ground running with the Razorbacks earlier this year. KJ Jefferson liked what he saw as well, pointing to the back’s big frame, explosiveness and open-field ability with the ball in his hands.

In Arkansas’ first scrimmage, Sanders totaled 56 yards on six carries and had the longest run of the day at 35 yards against the second-team defense. In scrimmage No. 2, he had 28 yards and an 18-yard score in red zone work on nine carries.

With Pittman placing an emphasis on being a more physical team in the running game, Sanders will likely be called on for key carries. It is rare that a team pushes through a season without a number of backs pitching in in some capacity.

Trelon Smith, who rushed for 710 yards and five touchdowns last season, is the presumed top back in the group, but Sanders — as well as Dominique Johnson — can step in as a bigger-body tailback to spell him and be used in special packages.

“I think he’s going to help us,” Pittman said.

Somewhat quietly, Gregory pieced together a productive season in 2020 for the Razorbacks alongside Jonathan Marshall, who was drafted by the New York Jets earlier this month. He finished second in tackles among defensive linemen with 27 — 12 unassisted.

Gregory played in nine of 10 games and started seven, including three in a row against Mississippi State, Auburn and Ole Miss in which he recorded 10 tackles and 1.5 sacks. His shining moment came in the home win against Tennessee when he nabbed one of Arkansas’ two interceptions.

After playing in two games and totaling four tackles in 2019, Gregory made a sizable leap last fall and is capable of becoming a steady, consistent force up front in 2021 for a defense in need of an improved pass rush.

This spring, Gregory worked a combo role as a tackle and defensive end, which could open up more opportunities to make plays. Although the Razorbacks added Markell Utsey, Tre Williams and John Ridgeway from the transfer portal, he is expected to play a key role and be in position to flourish in Year 2 under Barry Odom.

Ricky Stromberg and Myron Cunningham, two players with experience on Arkansas’ offensive line, said during spring drills that Gregory caught their eye in team work. Cunningham added that he is among the defensive linemen who are toughest to block and that he does not give up on a play.

Gregory is a bit like Marshall in the sense that he is soft spoken, quiet and allows his play to speak for him. He could become a valuable lead-by-example kind of player for the Razorbacks and have the type of season that doesn’t fly under the radar.

The tight end’s first two seasons at Arkansas, obviously, have not gone as anticipated. Henry had a great deal of expectation — and pressure, probably — on his shoulders when he arrived on campus from Pulaski Academy in Little Rock as the top prospect at his position in the country, according to ESPN.

Entering this fall, Henry has seen the field in only nine games, largely due to various injuries, and caught 19 passes for 107 yards. Each of his receptions as a freshman came at No. 1 LSU, then he became a bit more of a threat in the passing game in 2020, bringing in 16 passes, including a touchdown at Mississippi State as the Razorbacks ended their SEC losing streak.

Because of injuries, Henry admitted this spring that in the past he has questioned why things were happening to him that kept him off the field. At certain points, he has been down mentally with his situation and inability to produce in ways he knows he is capable.

His redshirt sophomore year could be when he finally shines.

Henry said in early April that he has “gotten a lot bigger” thanks to work in the weight room with Coach Jamil Walker, adding five pounds and gaining lower-body strength that will assist him in terms of explosiveness and run blocking.

Tight ends coach Cody Kennedy placed a spring-time emphasis on physicality and bringing a nastiness to the field. Henry has embraced it. Additionally, footwork, hand placement and hat placement were a focus as he sets out to be a “force for good” offensively.

According to SECStatCat, Henry was targeted most often last season on slide routes (8) and hitch routes (5), and four times on seam routes. He gained 74 yards on those 12 receptions. Henry also has run-after-catch potential, which could be another benefit of his lower-body training.