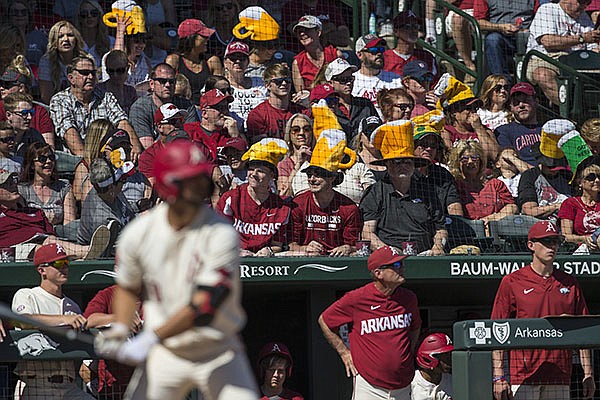 FAYETTEVILLE — Most college sports programs have well-established traditions like cheers, hand signals or fight songs that are observed from sport to sport.

But within each fan base, sport-specific traditions can emerge, and baseball gravitates toward some of the quirkiest.

In the SEC, baseball traditions include fans feeding the opposing team in left field at Mississippi State; blowing bubbles at Texas A&M and throwing cups of beer in the air at Ole Miss after the home team hits a home run; and the infamous Vanderbilt whistlers.

At Arkansas, a baseball tradition that has taken hold in the last decade is the donning of beer mug hats — predominantly yellow and white, and some with a touch of green or black — when the Razorbacks load the bases.

“I started noticing it when you’ve got a group of guys down the first-base line with these goofy-looking hats on. We didn’t know what they were,” Arkansas coach Dave Van Horn said. “And then we kind of started realizing they only put them on when we have the bases loaded. Now they’re all over the stadium. I don’t know where they buy them, but they do.”

The tradition can be linked to a group of friends — Jim Tran, Heath Schluterman and Kyle Thompson — who have been attending baseball games since they were college roommates in the 2000s. You might have seen them at the park in those days dressed as the "Infield Fly Guys" or tailgating as part of a group called BaumBQ.

In their college days, a Daktronics scoreboard at the ballpark would play an animation when the bases were loaded. The animation would show bases grow legs, meet at home plate and toast beer mugs.

In 2008, Schulterman found beer mug hats while shopping in the $1 section at Target sometime around St. Patrick’s Day. According to Tran, Schluterman brought the hats to the ballpark and passed them around to his friends.

Over the years, Tran said he would frequent the store at times around St. Patrick’s Day or Oktoberfest and buy however many hats were for sale.

“I would stuff it in my bag and we were kind of in the student section in Section 103…so we would always have our normal friends and people who always sat there,” Tran said, “and every time the bases were loaded we would pass hats to them, and after it was over they would pass hats back to us.”

The tradition didn’t take hold right away and spread to other areas of the stadium slowly.

Because Tran and his friends had cornered the market on the novelty hats being sold in Fayetteville, fans who wanted to purchase their own had trouble finding them anywhere but through online vendors. But over the years, more and more people arrived at the park with beer hats in hand.

It became so prevalent the Razorbacks began selling the hats at their in-stadium stores.

“It’s kind of fun to watch people who see what we’re doing, and they’ve never been to a game before, so they run up and buy a beer hat because they want to be part of the experience,” Tran said.

It’s not uncommon now to see hundreds — if not thousands — in the stadium wearing the hats during bases-loaded situations. Tran and his friends even purchased a flag with beer mug hats to wave whenever the team scored with the bases loaded — a “beer run,” as he called it.

“It’s kind of a cool tradition,” Van Horn said. “I like it because it means we’ve got the bases loaded.”

Tran said the hats have become common to see on road trips, especially at the College World Series when the Razorbacks are playing. He said he knows people who will put their hat on while watching a game on TV.

“It gives people something to believe in, that this is a lucky hat or a lucky thing we’re all doing together as fans,” Tran said.

It all began with a seemingly random purchase from the bargain aisle more than a decade ago.

“We’re all about having fun and just enjoying the company we have when we have it,” Tran said. “This whole legacy of something that will outlast us, it brings a smile to my face and my friends’ face, just knowing this whole thing started with a bunch of goofy guys at the baseball game.

“It’s something that makes our stadium unique. I don’t think it’s going away any time soon.”