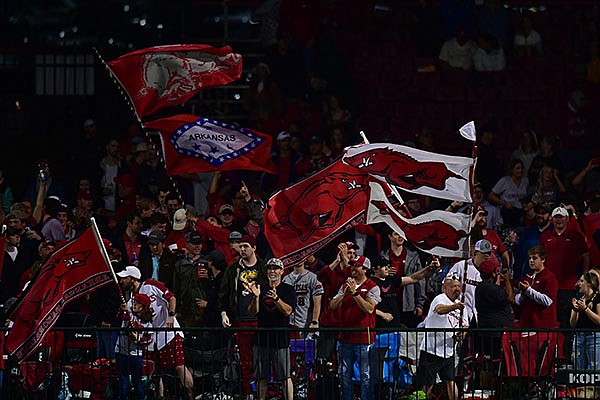 Arkansas fans celebrate during a game against Florida on Thursday, May 20, 2021, in Fayetteville.

FAYETTEVILLE — The No. 1 team in college baseball picked up a late-season addition Thursday night — a real home-field advantage.

It isn’t that Arkansas has struggled at home this season. The Razorbacks improved to 24-5 at Baum-Walker Stadium with their 6-1 victory over No. 8 Florida.

But not since Game 3 of the 2019 super regional against Ole Miss has a crowd at Arkansas’ home ballpark felt as impactful as it did Thursday night.

Because of closed gates and concession stands, an announced attendance of 11,084 waited through longer-than-usual lines, as well as through a brief heavy rain shower. Any inconvenience was forgotten as they watched the Razorbacks clinch no worse than a share of their third consecutive division championship.

And if you thought Thursday was a tough ticket, wait until Friday when the Razorbacks can clinch a share of the SEC title with a win on their home field.

“It felt like a regional,” said Patrick Wicklander, who struck out a career-high 11 batters in six innings, during an interview on SEC Network.

It was the first time since the outbreak of covid-19 more than 14 months ago that full capacity has been allowed on Arkansas’ campus. Before Thursday, no more than two-thirds of the stadium could be full.

The crowd was electric throughout the night. It roared at Arkansas' 16 strikeouts and four RBI hits, and many times loudly expressed its displeasure with home plate umpire Seth Buckminster's strike zone.

"You could definitely feel them," Arkansas coach Dave Van Horn said. "They were loud and we really appreciate it. It was great.

"You knew it was really loud when the seventh inning hog call was the best one I’ve heard in a couple of years. I’m sure our players heard it."

For many Arkansas players — including most of its position starters — Thursday's game was long awaited. The big home crowds had helped entice them to be Razorbacks, but they had never played in front of that type of environment in Fayetteville.

“I’ve experienced that in the stands before, but I never got to on the field,” said outfielder Cayden Wallace, whose 3-for-4 night included 2 home runs and 4 RBI. “That’s what I’ve been dreaming of since I got on campus, playing for a crowd like this, and it was electric tonight. It was awesome. The team did a great job in front of it.”

Arkansas (40-10, 20-8 SEC) is no stranger to playing in front of big crowds this season. The Razorbacks played in front of five-figure attendances during the season-opening College Baseball Showdown in Arlington, Texas, and in front of a weekend-record crowd at Ole Miss in April.

There were near-season-high crowds in attendance to watch the Razorbacks win series at Mississippi State, South Carolina, LSU and Tennessee.

Arkansas’ coaches have said the team fed off big crowds on the road, but Thursday was its first chance to do so at home.

There will be more chances, too. The NCAA announced this week it would reverse course and allow local guidelines to dictate attendance at its regionals and super regionals. The Razorbacks' park will be packed for however long they play before the College World Series.

“We just want to do it for the fans and they were great to us and we want to be great back,” Wallace said on the Razorback Sports Network postgame radio show. “We’re just going to keep doing it and hopefully it will be fully packed the next two games and we’ll keep doing the same thing.”

It seemed every change to the lineup worked in Arkansas’ favor during Thursday’s game.

• Third baseman Jacob Nesbit made a key defensive play to rob Florida of a hit in the seventh inning. Nesbit entered the game as a pinch runner in the fifth.

• Nesbit pinch ran for Charlie Welch, whose two-out pinch-hit single contributed to the Razorbacks’ two-run fifth inning. Welch improved to 6 for 10 in pinch-hit opportunities this season.

• Braydon Webb, who entered the game as a defensive replacement in left field in the sixth inning, hit a two-out double to spark a three-run eighth that was punctuated by Wallace’s second home run.

“Arkansas is playing at a high level,” Florida coach Kevin O’Sullivan said on the Gators’ postgame radio show. “They battled with two strikes and they competed. One of the things coming to the weekend was Arkansas has probably been the one team in our league that has figured out how to play together as a group earlier than anybody else in our league. That’s why they’re in the position they are.”

Arkansas can clinch at least a share of the SEC championship with a win, or with losses by both Tennessee and Vanderbilt on Friday.

The Volunteers are at South Carolina and the Commodores are home against Kentucky. Both teams won Thursday to remain in the hunt behind Arkansas.

The Razorbacks can win the league outright Friday with a win and a loss by Tennessee. No other team but Arkansas can claim an SEC title Friday.

Arkansas would clinch the SEC West title outright with either a win or a loss by Mississippi State at Alabama.

Wallace hit a solo home run during the fifth inning to give the Razorbacks a 2-1 lead and a three-run homer in the eighth to extend the lead to 6-1.

The eighth-inning home run was Wallace’s 12th this season, which tied Matt Goodheart and Robert Moore for the team lead.

Moore, Franklin (Mississippi State) and Wallace are the only Arkansas players to hit multiple home runs in an SEC game. Four of the two-homer games came against Arkansas-Pine Bluff on April 14.

The Gators’ final hit came during the third inning when Nathan Hickey singled with two outs against Wicklander. Florida had only two base runners the rest of the game.

The three hits were the Gators’ fewest since April 2 when Ole Miss pitcher Doug Nikhazy also held them to three.

Arkansas pitching held an opponent to three hits or less for the ninth time this year, including the sixth time in conference play. Wicklander has pitched during three of those games and Kopps has pitched in four.

With its win Thursday, Arkansas clinched one of the top two seeds for next week’s SEC Tournament in Hoover, Ala.

The top two seeds are occupied by the SEC West and SEC East champions. While the Razorbacks can be caught by Mississippi State in the division race, Arkansas holds a tiebreaker over Mississippi State due to its sweep of the Bulldogs in March.

The Dick Howser Trophy will announce its list of semifinalists Friday. The Howser Trophy is presented to the national player of the year in college baseball.