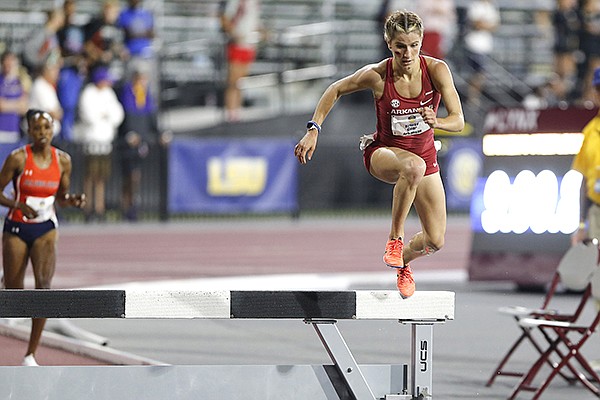 Arkansas' Krissy Gear competes in the steeplechase on Friday, May 14, 2021, during the SEC Outdoor Track and Field Championships in College Station, Texas. (Photo by Robert Black, via Arkansas Athletics)

The University of Arkansas women’s and men’s teams have a combined 59 entries for the NCAA West preliminary meet, which will be held next week, May 26-29, in College Station, Texas.

The top 12 finishers in each event at the West prelims advance to the NCAA Championships held June 9-12 in Eugene, Ore.

The 32 entries for the Razorbacks’ women team include 28 athletes in 13 events. The Arkansas men’s team has 24 athletes in 14 events.

The Red Wolves’ group of 18 tops a previous best of 16 athletes sent to the preliminary event in 2019. The top-48 athletes in each event qualified for the competition at E.B. Cushing Stadium, and the top-12 finishers will advance to the NCAA Outdoor Championships from June 9-12 in Eugene, Oregon.

On the women’s side, Rainee Bowers is set to compete in the 100 meter hurdles and Pauline Meyer will run the 3000 meter steeplechase. Allie Hensley qualified in the high jump, while Lauren Beauchamp will feature in the pole vault event and Imani Udoumana in the triple jump. Among the Red Wolves’ throwers, Evangelyyn Harris will compete in the shot put and discuss, joined by Grace Flowers (hammer) and Babette Vandeput (discus).

Jones set a program record for the Trojans with a mark of 7-1 on April 10 and qualified for the preliminary as the No. 18 high jumper in the West. Curington finished second in the long jump at the Sun Belt Championships and arrives to the preliminary No. 29 in the West.