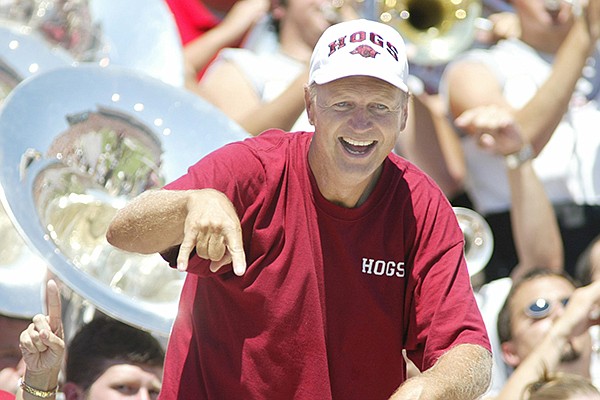 An Arkansas football fan flashes a downward hook 'em sign during the Razorbacks' 38-28 victory over Texas on Saturday, Sept. 13, 2003, in Austin, Texas.

The number of fans in Razorback Nation who dislike Texas has decreased by tens of thousands over the last three decades of SEC membership.

Of course, dislike is not the word I use most of the time. It’s a little worse.

But it still doesn’t take much to make playing Texas the topic of the day.

All it took for that to happen this week was the announcement of a football game time of the Sept. 11 date with the Longhorns. ESPN is going to broadcast the renewal of the old Southwest Conference rivalry at 6 p.m.

It’s a fun thought, playing the Longhorns. It’s a penalty in the Big 12 if an opposing player gives the downward ‘Horns sign in a conference game. It’s going to happen over and over in Fayetteville.

But not everyone at Reynolds Razorback Stadium will really have the dislike deep in the heart. Most don’t know that true dislike in their hearts. How could they?

I do. There was the thrill of a 14-13 victory in 1964 over No. 1 Texas that was a huge boost to the Razorbacks' national title season. As a 10-year-old listening to the radio in Little Rock, I recall getting permission from my grandmother to go into the driveway and honk horns like they were doing all over Arkansas.

However, most are too young to know much about the old SWC rivalry between the Razorbacks and Longhorns. The Hogs left the SWC in 1991 and have played the Longhorns just five times since.

Just to make sure what this rivalry might have been in the Lone Star State, I checked with the best man I know with ties to both Texas and Arkansas. Dean Campbell, a 1970 Texas grad, played for the Longhorns in 1970-71 and was on Bobby Petrino’s staff at Arkansas as Director of High School Relations in 2008-09.

I got to know him well while watching practices. He had stories of growing up in Austin in the same neighborhood where Texas coach Darrell Royal resided. Of course, he played for Royal.

I’ve kept up with Campbell in retirement in Austin. He’s got a ranch and bed and breakfast. He still keeps up with Arkansas football, just like he does at other places where he coached (Texas A&M, Texas, Texas Tech and Air Force) over a 35-year college carer.

It was worth a phone call to catch up, plus try to determine if Texas fans have any deep feelings toward playing the Razorbacks.

“The younger crowd, they might not even know that Arkansas and Texas had one of the greatest rivalries in college football. They probably don’t even know they were in the same league.

“Now if they are over 50, they respect and appreciate that we played because there were some great games.”

Campbell said the Hogs were a rival to Texas, but Oklahoma and Texas A&M were the two biggest rivals for the Longhorns. Oklahoma is clearly tops now.

“The sad thing about what’s happen is that of our top two rivals, we don’t play two of them any more,” Campbell said. “That would be Texas A&M and Arkansas.”

The dynamics of the Arkansas-Texas series revolve around the Oklahoma-Texas series. In most years, Arkansas played Texas the week after the Longhorns and Sooners played in Dallas in the Red River Rivalry.

“That was always the tough thing about the Texas schedule, for many seasons we played our two toughest opponents in back-to-back weeks,” Campbell said. “There was a long time period where it seemed like Arkansas was always in the top five when we played.

“So there was great respect for Arkansas, but our fans didn’t feel for Arkansas like they did against Oklahoma. That was the team (Texas hated).

“It was a tough game and then we had to play Arkansas the next week with lots of bumps and bruises. It was just the way it was.”

Campbell heard most of the stories of the respect and admiration felt between Frank Broyles and Royal.

“I heard Coach Royal talk about Coach Broyles so many times and there was such high praise for Coach Broyles," Campbell said. "That was what made the rivalry unique is the close friendship between those two. Our players knew that.

“I think that’s what the young people don’t realize about the rivalry is what the two coaches shared in friendship.”

It hardly mattered to the fans, but that’s probably why one old timer in the Arkansas athletic program once told me, “We don’t hate Texas.” I explained repeatedly that it wasn’t the Texas players that were hated by Razorback Nation, but the Longhorn fans.

Competition on the field has always been fair and square with Texas teams. They generally carry themselves in a class manner.

It’s their fans – and certain members of their athletics department – who deserve the wrath that I’ve felt since a boy. They are arrogant you-know-whats.

They turn their nose up to everyone. They act like they are better than everyone else.

That’s what winning – and having the best of everything – will do to a fan. You get that sometimes from Alabama folks now. I’m not talking about players, but the Crimson Tide fans.

That’s what a lot of winning – and a lot of money – can do to someone. Of course, Texas hasn’t won much of late. The Longhorns have been bad so bad in football and basketball that they have new coaches this season.

They aren’t real patient at Texas in those two sports. Arrogance creates a lack of patience.

It makes me happy. The Longhorns make their own problems. They can’t help it. They are the reason the SWC fell apart. They treated everyone poorly. They set the rules and it was always slanted to their side.

They ultimately ran off Nebraska and Missouri in the Big 12, too. The Longhorn Network is a perfect case of Texas trying to keep everything to itself. Greed and arrogance will take you down eventually. It has in Austin.

That wasn’t discussed with Campbell this time. He knows my thoughts because I shared them while watching Arkansas practices in the Petrino years. Campbell is a fly fishing and golfing friend.

You can have friends in Texas. You can respect and love them.

Still, I will understand if you flash a downward hook ‘em on Sept. 11.