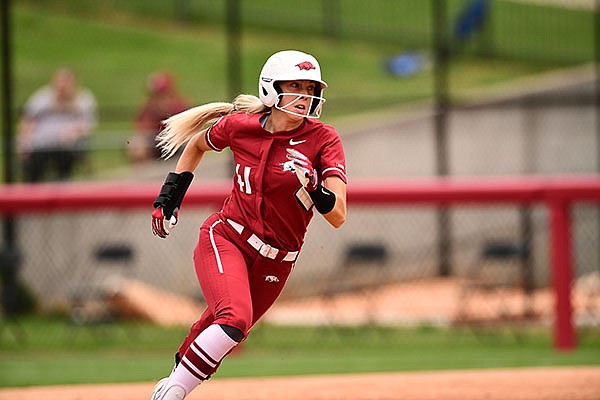 Arkansas' Danielle Gibson runs toward home plate during an NCAA regional game against South Dakota State on Saturday, May 22, 2021, in Fayetteville.

FAYETTEVILLE — Arkansas pitcher Mary Haff struggled with her emotions in front of a raucous crowd at Bogle Park on Friday.

She had no such issues on Saturday while holding South Dakota State in check.

The junior tossed six scoreless innings to lead the University of Arkansas to a 4-0 win over the Jackrabbits in the winner’s bracket of the NCAA Fayetteville Regional.

Arkansas (42-9) will face Stanford in the regional final at 3 p.m. today. The Razorbacks, the No. 6 national seed, need just one more win in two games to advance to the super regional for just the second time in school history.

Haff (25-6) scattered 4 hits, struck out 7 and walked 1 over 6 innings to pick up her second win in two days. She threw a two-hitter in the Razorbacks’ five-inning, run-rule 8-0 victory over Manhattan on Friday.

“I think it’s been a while since I performed in front of such a big crowd,” Haff said. “And I think I let that kinda get to me [Friday]. I think I controlled my emotions better [Saturday] and just let the game come back to me

“It’s all about my preparation, and I’ve prepared for this. I just have to trust that and just stay with the process.”

South Dakota State mounted a threat against Arkansas reliever Autumn Storms in the seventh, loading the bases with two outs. But Storms struck out Emma Osmundson to end the game.

Arkansas Coach Courtney Deifel said her confidence never wavered despite the Jackrabbits’ threat in the seventh.

“It’s not the situation you want, but I thought they controlled their emotions and she made a big pitch,” Deifel said. “I just have a ton of trust in them.

“South Dakota State’s a really tough team, and the way they swing it they can be back in the game really quickly. I was just really glad we stayed the course and secured the win.”

“I’m proud of our team,” she said. “We got ourselves in position to score, and we just didn’t come up with that big base hit. We left the bases loaded twice.”

She didn’t believe the pressure of playing in the program’s first NCAA Tournament affected her team.

Linnie Malkin’s two-run home run in the top of the second inning — her 17th of the season — got Arkansas on the board and built the team’s confidence.

“Whenever you have runs on the board, you always get to be more comfortable,” Haff said. “Linnie’s home run was big and was really a turning point in the whole game for our momentum.

“You kinda just felt them get tense and in the box swinging at things that I really don’t think they wanted to swing at. Having that lead early in the game made me more comfortable and made their offensive approach more pressed.”

Arkansas added on in the fourth as Kayla Green hammered an RBI double off the right-center field wall, and Aly Manzo followed with a run-scoring single that caromed off the first-base bag and into right field. That allowed Green to score from second for a 4-0 lead.

Deifel said there’s comfort coming into today as the lone undefeated team in the regional, but she’s not about to breathe a sigh of relief.

“It’s always nice to go into Sunday as the undefeated team that has to be beat twice, so I feel good about that, but I won’t take any breaths,” Deifel said.

Third baseman Kristina Inouye went 3 for 4 with 2 doubles and 2 RBI to help the Cardinal eliminate the Jaspers.

Stanford (32-21) took advantage of Manhattan miscues to grab a 3-0 lead, then put the game away with a five-run top of the seventh.

Maddy Dwyer (4-1) picked up the complete-game victory. She allowed 2 runs on 4 hits while striking out 4 and walking 1.