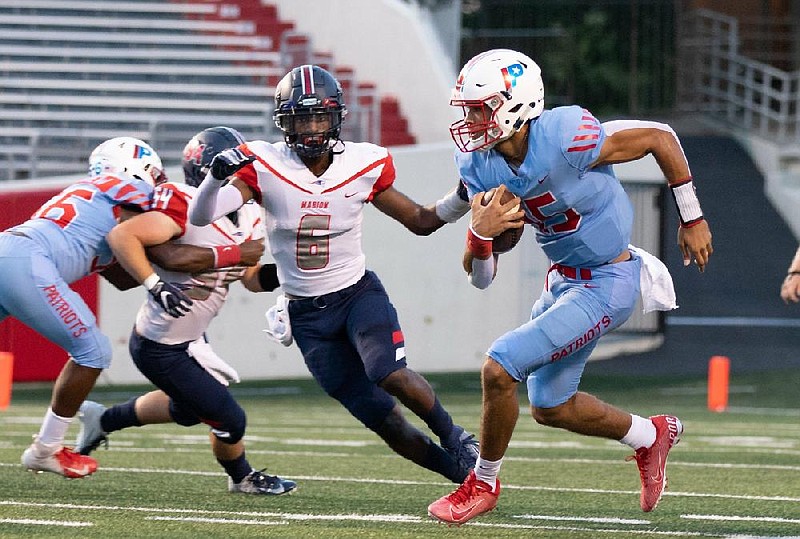 Former Little Rock Parkview quarterback Landon Rogers (6-5, 215) is well aware he will be the only one of six signal callers on the Arkansas roster who has never been through a Razorback practice.

But don’t expect him to be a wallflower and shy away from competition once he gets on campus this weekend as one of 11 summer arrivals.

“I’m just really excited,” Rogers said. “I am just going to get up there and be a competitor, you know what I mean? I am going to learn all that I can learn, get all the knowledge and progress as far and I can.”

Rogers doesn’t think that being away from home will be as big of a transition as it is for others in his recruiting class.

“I’m not far from (the) Arkansas (campus), so it’s not that big a deal, but going from high school to college is a blessing and I am excited about taking my talents to the next level and getting coached to be the best I can be,” Rogers said. "All together, it is pretty exciting.”

Rogers, a consensus three-star prospect, is pumped about becoming a part of a program that has Sam Pittman as its second-year coach and Kendal Briles as its offensive coordinator.

“I am so excited about the program,” Rogers said. “Coach Sam Pittman, the stuff he brings to the table is just outrageous, stuff that he can do with the O-line and has done in the past.

“And Coach Briles, he is a smart man, real smart on the field, so I have full trust in that as well.”

In his Little Rock Parkview career, Rogers passed for 3,621 yards and 33 touchdowns and rushed for 1,867 yards and 35 touchdowns.

One of his favorite targets was Patriots tight end and fellow Arkansas signee and weekend arrival Erin Outley (6-4, 256).

“He is real dominant and has great hands,” Rogers said. “He is way more versatile than what people think. He can block, he can be strong and catch a pass and can go get a jump ball. He is just solid all the way around.”

He and Outley have thrown the ball on a daily basis in addition to hitting the weights and conditioning.

“I know I have the arm strength and I have just been trying to perfect my accuracy,” Rogers said. “I know at the next level you have got to have timing, ball placement and really good footwork.”

“It is a solid group all the way around,” Rogers said. “Just from the way they talk, their experiences and what they bring to the table, it is just at a different level.”

Outley was lost to a season-ending injury in the second week of the 2020 season in a year when the Patriots went 9-2 while averaging 30 points per game offensively during the regular season.

Little Rock Parkview routed Siloam Springs 42-7 in the opening round of the Class 6A state playoffs before being stunned and eliminated by Sylvan Hills 7-0 in Week 2.

“Personally, I think we could have done a lot better,” Rogers said. “We didn’t have all of our weapons on offense and that hurt us, but you still have to do what you can with whatever you have. As a team, defensive-wise, we just really stepped it up.

“Our running game was unstoppable, the passing game was short cut a little bit. We just had to do what we could to win. Everybody just bought in, but we just didn’t it get it done at the end.”