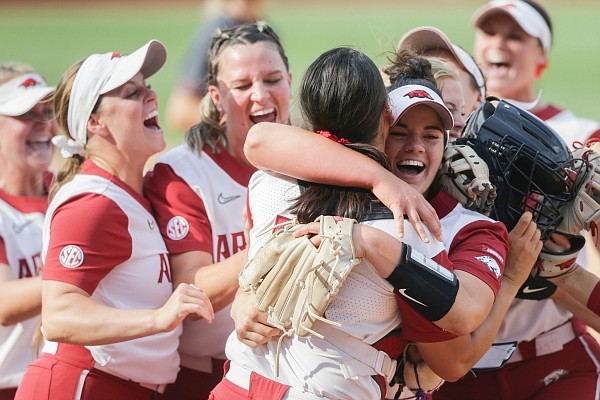 Arkansas pitcher Mary Haff (4) hugs catcher Kayla Green (13) as they celebrate with teammates on Sunday, May 23, 2021, during the NCAA Fayetteville Softball Regional at Bogle Park in Fayetteville. Check out nwaonline.com/210524Daily/ for the photo gallery.

FAYETTEVILLE — The University of Arkansas softball team combined power and pitching to secure its second NCAA regional title on Sunday.

Braxton Burnside and Linnie Malkin both homered and Mary Haff threw six scoreless inning to help the Razorbacks claim a 7-3 win over Stanford and wrap up the Fayetteville Regional in front of a crowd of 2,602 on Sunday afternoon at Bogle Park.

The Razorbacks sailed through the regional without a loss, but that wasn’t a surprise to Arkansas Coach Courtney Deifel.

Arkansas jumped in front 2-0 in the top of the first inning on Burnside’s 25th home run of the season, but Stanford came back with three unearned runs. The Razorbacks stayed under control, Deifel said.

“It’s postseason,” Deifel said. “You know whoever you play, they’re going to throw punches and we expected it.

“I thought our team continued to be businesslike. I think they played with a ton of emotion but didn’t get emotional and I’m just really proud of their composure and how they finished it. We didn’t make some plays in that first inning, but we stayed the course and continued to fight and grabbed control of the game and didn’t give it up.”

The Razorbacks turned a 3-2 deficit into a 4-3 advantage thanks to a pair of unearned runs in the top of the fourth. Designated player Linnie Malkin appeared to have tied the game with a massive solo blast down the left-field line leading off the inning, but it was ruled foul. She reached base a couple pitches later when her ground ball eluded the Stanford third baseman.

Malkin’s perseverance set the table for the two-run inning to regain the lead, Deifel said.

“I thought she had incredible composure,” Deifel said. “We thought she obviously hit one out there, she controlled her emotions, grinded away to get on base and really got something going. I think Mary [Haff] came in and did what Mary does.

Ryan Jackson’s run-scoring single tied the game at 3-3 and Keely Huffine drove in the go-ahead run on a ground out.

Malkin then gave the Razorbacks some breathing room with her 18th home run of the season and second of the weekend — a three-run blast to center field in the fifth for a 7-3 lead.

That was enough for Haff (26-6), who earned her third win of the regional. She came on to start the second inning with Arkansas trailing and threw up zeroes the rest of the way.

Stanford (33-22), which won two games on Saturday in the loser’s bracket to reach the regional final, loaded the bases in the seventh with two outs. But Haff got cleanup hitter Aly Kaneshiro on the pop up to first, triggering a massive celebration near home plate.

Haff allowed 5 hits, struck out 3 and did not walk a batter in 6 innings of work. She pitched 17 scoreless innings in the regional.