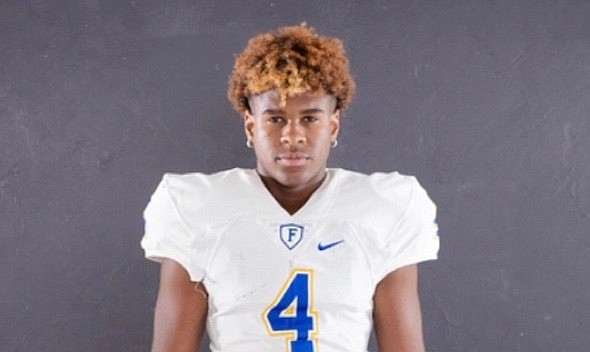 Arkansas cornerback signee Chase Lowery (6-0, 180) of Frisco, Texas, made it to Fayetteville on Monday feeling healthier than he has in a long time.

It seems that Lowery played the last two seasons with a pair of dislocated shoulders and torn labrums.

“For about two years, my right shoulder had been giving me problems if I tackled somebody the wrong way,” Lowery said. “(The pain) went away, but then my left arm started hurting this season. I went in to get an MRI and it showed that my right shoulder was dislocated and I had a torn labrum, but it had healed itself.

“But it turns out my left shoulder was also dislocated and had a torn labrum there, too, so I had surgery on that after the season.

“I got cleared on my last visit and I am so excited about being able to play without pain.”

He was the last player in a class ranked 25th nationally to report to Fayetteville and did so Monday after graduating on Sunday.

“We all have the same mentality and that’s basically to come in here, work as hard as we can and help build something new and special,” Lowery said. “I’ve been ready for a while now to get up there and just get around the guys and get to know them.”

“There is just something about Coach Pittman,” Lowery said. “He gets you so fired up and is always ready to compete. If you put in the work and show that you deserve to be out there, he will put you in.

“I think the sky is the limit for our class, and moving forward we will help continue the rebuild.”

Lowery had 14 catches for 403 yards and 2 touchdowns while making 26 tackles, 4 interceptions, 1 pass breakup, 1 fumble recovery and 1 forced fumble as a senior in a coronavirus-shortened seven-game season.

In an 11-3 season as a junior in 2019, Lowery had 31 catches for 709 yards and 7 touchdowns while also having 44 tackles with 4 interceptions (one returned for a score), 8 passes defended and a forced fumble.

“My main goal is just to get a little (playing time), whether it is in the return game, on defense, on offense, wherever,” Lowery said. “Team-wise, it is to win as many games as we can, get to a bowl and win the bowl.”

Even with rehabbing after the surgery, Lowery has been able to get in some conditioning.

“I have been doing some DB workouts, some training and pushing with my physical therapy,” Lowery said. “I’m good to go and very excited about it.”