Arkansas no longer just happy to be in super regional 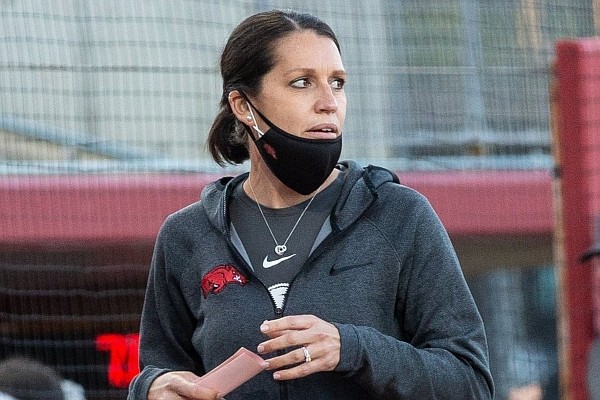 Courtney Deifel, head softball coach at Arkansas, is shown at Bogle Park at the University of Arkansas on Friday, March 25, 2021.

FAYETTEVILLE — Softball fans already have learned there’s something about Mary, but the entire University of Arkansas team has something special, too.

Pitcher Mary Haff earned all three wins over the weekend to help the Razorbacks cruise through the Fayetteville Regional unbeaten to claim their second super regional berth in school history. Arkansas (43-9) needs just two more wins to secure its first berth in the College World Series.

“We saw Mary Haff at her best this weekend, and not necessarily pitching her best but fighting her best and having a really level mindset,” Arkansas Coach Courtney Deifel said.

This year is different. Specifically, the No. 6 national seed Razorbacks won’t have to travel to Norman, Okla., to face the Sooners. Instead, they will host the No. 11 seed Arizona at jam-packed Bogle Park.

The best-of-three Fayetteville Super Regional begins at 6 p.m. Friday. Saturday’s game is slated for a 4 p.m. start, while Sunday’s will begin at 8, if necessary.

“I think we are definitely better this time around,” Haff said. “I think last time when we got to a super we were kind of just happy to be there. But now we’re ready to go and win a super.

Both Deifel and Haff said they thought this team had a chance to be special going back to the fall.

“We’ve grinded all season, ya know?” Haff said. “We’ve gone through crazy covid protocols. Not getting to enjoy this and that in the fall because we wanted a season and we wanted to make it to the end of the season.

The Razorbacks’ maturity and focus have been keys to their success, Deifel said. Both were on display last weekend.

Haff, who is now the Razorbacks’ career leader in wins, was effective, but Deifel noted the SEC co-pitcher of the year has been better.

“I don’t think she had her best stuff on Friday,” Deifel said. “She didn’t feel all that great in her mechanics in her warm-up on Saturday, and you could never tell. Our team couldn’t tell.

“That’s what so impressive about Mary. No one is going to know her better than her team. And her teammates had no idea that she didn’t feel her best on Saturday and she just grinded it out for them.”

“To be completely honest, really weakly, poorly hit balls, those are sometimes the hardest ones to defend,” Deifel said. “And also the one’s that can cause you to get completely frustrated and think you need to do more. And she handled it really well.”

The other big key was Linnie Malkin’s composure at the plate Sunday, Deifel said.

The junior, who went 4 for 9 with 2 home runs and 7 RBI in the regional, appeared to hit a game-tying home run down the left-field line on a 3-2 pitch in the top of the fourth inning, but it was called foul. Malkin didn’t let that change her approach and she eventually reached base on a Stanford error.

Deifel praised her composure and credited her with helping the team score twice later in the inning to take the lead for good. One inning later, Malkin crushed a three-run shot that turned out to be the clincher.

“When she hit that home run that was called foul, a lot of players would lose their mind and get so frustrated,” Deifel said. “She continued to grind and find a way to win the at-bat. And then the three-run homer, it’s just really special.

“I think that call fired our team up. And I think that shows our toughness more than anything. I think Razorback teams in the past and a lot of other teams, they might get too big-eyed or too frustrated by that call. But it lit a fire under our team.”