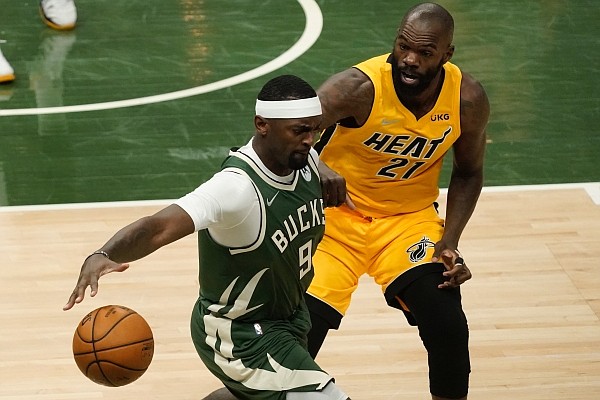 Milwaukee Bucks' Bobby Portis grabs the ball in front of Miami Heat's Dewayne Dedmon during the first half of Game 1 of their NBA basketball first-round playoff series Saturday, May 22, 2021, in Milwaukee. (AP Photo/Morry Gash)

Four former Arkansas basketball players are in the 2021 NBA Playoffs. Here is a look at their postseason performances so far:

After a Game 1 win that was a bit too close for comfort for Bucks fans, Milwaukee is in control of its first-round series with the Miami Heat as it shifts to south Florida.

Former Arkansas forward Bobby Portis and the Bucks lead 2-0 after a 109-107 overtime win Saturday and 132-98 rout of the Heat on Monday. Portis finished with 8 points on 4 of 6 shooting, 4 rebounds and 1 steal in 16-plus minutes in Game 1, which his mother was in attendance for.

He knocked down a pair of free throw line jumpers, including one to beat the halftime buzzer and give Milwaukee a 53-50 lead, and got two shots in the lane to fall.

“It’s not about how many minutes you play, it’s about going out there and playing your minutes with force and doing all you can do in those minutes,” Portis said Sunday. “The coaches control the minutes. As a player, I’ve learned that you really can’t control that.

“You can just control what you do in the minutes that’s given to you and earn more minutes.”

In Game 2, Portis added 11 points on 3 of 6 shooting, including 2 of 3 from three-point range, 5 rebounds, 1 steal and 1 block 17-plus minutes. Milwaukee outscored Miami by 18 points when Portis was in the lineup.

Portis’ first score Monday also came in the final seconds of the first half when he tipped in a Jrue Holiday miss in the lane. His bucket gave the Bucks a 78-51 halftime lead.

In the second half, he made two threes, one from the right corner with under one minute to play in the third quarter and a 28-footer from the left wing in the fourth quarter.

Washington dropped Game 1 of its first-round series with the Philadelphia 76ers, but former Razorbacks forward Daniel Gafford had an impressive playoff debut Sunday.

“The energy here in Philly, it was crazy,” Gafford said of his first postseason experience. “It’s been a while since you’ve seen an arena that full, especially with this covid season going on. The level of intensity that’s around the arena from the fans to the players (is high).

“I ain’t going to lie to you, it’s been a minute since I’ve heard an arena to where I almost had to cover my ears, and I played in Bud Walton Arena. It’s totally different.”

Of Gafford’s six scores, all of them came on layups and dunks. According to NBA tracking data, his longest field goal attempt was one foot from the rim.

Defensively, Gafford was whistled for three first-quarter fouls and allowed a score on seven of 14 shots defended. 76ers center Joel Embiid was 2 of 3 against Gafford and wing Tobias Harris shot 2 of 5.

The Clippers, the 4 seed in the Western Conference, fell 113-103 to the Dallas Mavericks in Game 1 on Saturday.

Former Arkansas guard Patrick Beverley, in a starting role, scored 10 points on 4 of 6 shooting, including 2 of 4 from three-point range, grabbed 2 rebounds and had 1 block in 17-plus minutes. Dallas outscored Los Angeles by 13 points with Beverley on the floor.

He was 2 of 4 in the first half, connecting on back-to-back shots in the lane to give the Clippers a 53-49 lead late in the second quarter. In the third quarter, he knocked down a pair of left-wing threes in a two-minute, eight-second span.

On the defensive end, Beverley allowed two scores on three shots defended, including a three-pointer to Tim Hardaway Jr. and layup by Luka Doncic, who drew two shooting fouls on the guard. Beverley also forced a turnover by Dorian Finney-Smith.

Did not play in Game 1 of the series.