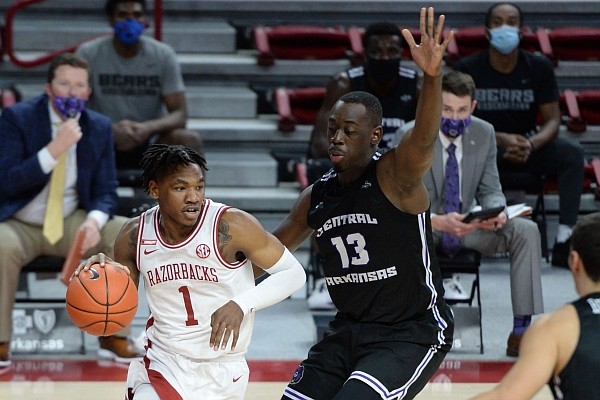 Arkansas forward JD Notae (1) drives along the baseline Saturday, Dec. 12, 2020, ahead of Central Arkansas forward Eddy Kayouloud (13) during the first half of play in Bud Walton Arena in Fayetteville.

FAYETTEVILLE — The first two home dates on the Arkansas men’s basketball schedule for the 2021-22 season are set.

The Razorbacks, coming off a 25-7 season and run to the Elite Eight of the NCAA Tournament, will play Central Arkansas on Wednesday, Dec. 1, and Elon on Tuesday, Dec. 21 at Bud Walton Arena, according to game contracts obtained Wednesday through an open records request.

Game times have not been determined. The games were finalized earlier this month.

UCA finished the 2020-21 season at 5-19 overall and 4-12 in Southland Conference play. Meeting for the first time since 1947, the Razorbacks defeated the Bears 100-75 last season in Fayetteville.

The Razorbacks are also scheduled to participate in the Hall of Fame Classic in Kansas City on Nov. 22-23. Arkansas will be joined by Illinois, Kansas State and Cincinnati at the event.

Games will be played at T-Mobile Center, but matchups have not been announced.

The Razorbacks remain under contract to play Oklahoma at the BOK Center in Tulsa on Saturday, Dec. 11. Former Arkansas assistant coach David Patrick accepted a position on the Sooners’ coaching staff this spring.