Slavens out 1-3 weeks with 'minor setback' 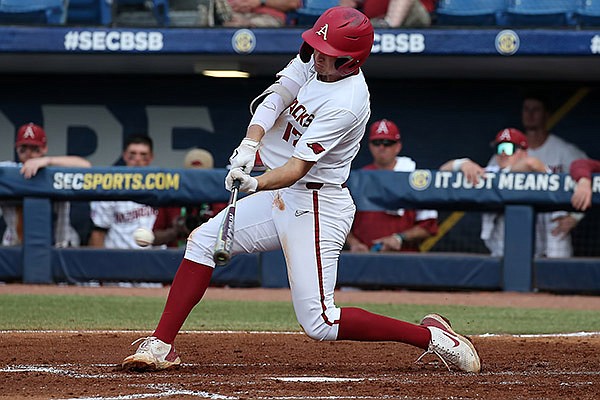 Details were scarce, but the feeling Wednesday night was Arkansas first baseman Brady Slavens might be able to play again this season.

Slavens was assisted off the field during the second inning when he turned his right ankle while stepping on first base to beat out a two-run single. He spent most of the Razorbacks’ 11-2 victory wearing a walking boot and holding crutches in the dugout.

A team spokesman said Thursday that Slavens has a lateral ankle sprain and will need 1 to 3 weeks of recovery time.

"It looks like there’s some opportunity for him to get healthy, but we’ll know more later, obviously.”

Slavens, a semifinalist for the Dick Howser Trophy who has an SEC-leading 61 RBI this season, tweeted after the game that he would be all right and called the injury a “minor setback.”

Cullen Smith, who moved from third base to first base following Slavens’ injury, indicated he thinks Slavens will be able to play again this season.

“For him to even apply any pressure was very good to see,” said Smith, who went 2 for 4 with 2 RBI, 1 home run and 1 walk. “They put that replay up there on the big board and it was like, ‘Ew, that is not good. Hopefully that’s a sprain instead of a break.’

“Corey (Wood), our trainer, came out...and said, ‘I think he’s going to be all right.’ He’s just got to ice the crap out of it. I know he’ll be back as soon as he can, but in the meantime we need to have some guys step up and fill that role.”