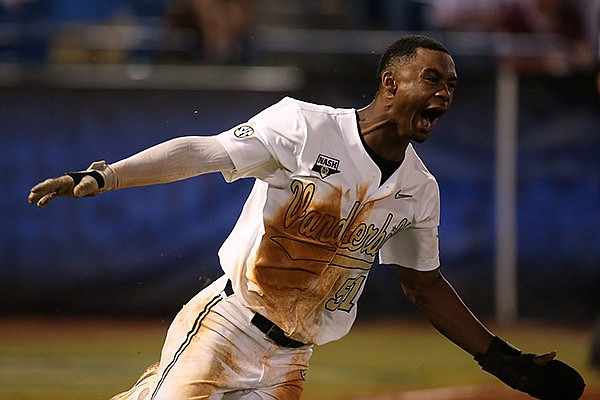 Vanderbilt's Enrique Bradfield celebrates after scoring the winning run during an SEC Tournament game against Ole Miss on Wednesday, May 26, 2021, in Hoover, Ala. (SEC pool photo)

HOOVER, Ala. — Dominic Keegan hit a slider down and away to score Enrique Bradfield Jr. in the bottom of the ninth inning and No. 4-seed Vanderbilt rallied to beat fifth-seeded Mississippi 5-4 on Wednesday night.

Vanderbilt (40-13) advances to play top-seeded Arkansas on Thursday in the third round of the SEC Tournament while Ole Miss will try to keep its season alive on Thursday against eight-seed Georgia.

Tim Elko continued his torrid hitting for Ole Miss (39-18) hitting two home runs and driving in all four Rebels runs. The senior tore an ACL on April 5, opted to rehab instead of ending his season, and returned to the team on May 8 and immediately hit a three-run home run.

Against the Commodores, Elko hit an opposite-field blast down the right field line to give Ole Miss a 3-1 lead in the top of the sixth.

Vanderbilt scored twice in the bottom of the sixth to knot the score before Elko hit a solo homer to left center two innings later. Elko now has homered four times in his last 23 at-bats.

Owen Diodati singled home Sam Praytor in the top of the 11th inning and 10th-seeded Alabama beat No. 2 seed Tennessee 3-2 on Wednesday in the second round of the SEC Tournament.

Alabama (31-22), which is 2-0 in the tournament for the first time since 2010, will take on Florida on Thursday in the winner's bracket. Tennessee (42-15) will play Mississippi State in an elimination game.

Tennessee appeared to have a walk-off win on Jake Rucker's hit up the middle, but Max Ferguson was called for interference on a slide into second. The play was reviewed and upheld.

Praytor led off the 11th with a double over the wall.

Jackson Tate walked with the bases loaded in the sixth, for his second RBI, to give Alabama a 2-0 lead. Tennessee tied it in the seventh after Connor Pavolony's bloop single and Liam Spence's infield hit.

Freshman Sterlin Thompson had a two-run double and a solo home run, and No. 6 seed Florida opened the second round of the SEC Tournament on Wednesday with a 13-1 victory over third-seeded Mississippi State in seven innings.

Florida (38-19) plays in the winner's bracket on Thursday, while Mississippi State (40-15) needs a win to stay in the double-elimination tournament.

Kris Armstrong added a two-run double and a two-run single, and Jacob Young had three RBIs for Florida. Thompson, Young and Armstrong combined for five RBIs in the third inning for a 9-1 lead. Thompson's double down the right-field line highlighted a four-run seventh.

Florida collected 18 hits, reaching the mark in a SEC Tournament game for the second time in program history.

Florida starter Hunter Barco (10-2) only allowed four hits and one run in seven innings. Barco got Lane Forsythe to fly out in the seventh to end the game on the 10-run rule.

Brandon Smith (4-3) gave up eight hits and six runs in a two-inning start for Mississippi State.