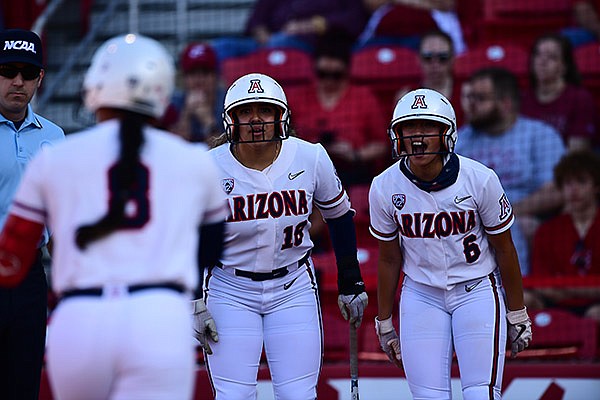 Arizona's Sharlize Palacios (18) and Janelle Meoño (6) wait as Dejah Mulipola (8) runs toward home plate after Mulipola hit a home run during an NCAA super regional game against Arkansas on Friday, May 28, 2021, in Fayetteville.

FAYETTEVILLE — Arizona homered four times and defeated Arkansas 10-4 on Friday in the first game of the NCAA Fayetteville Super Regional in front of 2,700 at Bogle Park.

The Wildcats (40-13) moved within one victory of advancing to the Women’s College World Series. Arkansas (43-10) must win games Saturday at 4 p.m. and an if-necessary game Sunday at 8 p.m. to win the super regional.

Arizona led almost from the outset Friday when Dejah Mulipola homered with two outs in the top of the first inning to give the Wildcats a 2-0 lead. Arizona added a run on Sharlize Palacios’ two-out RBI single in the top of the third inning.

Arkansas pulled within 3-1 when Hannah McEwen homered to lead off the bottom of the third, but the Razorbacks missed on a chance for a bigger inning. Braxton Burnside doubled in the at bat following McEwen’s home run, but she was stranded at third base.

Arizona followed with a four-run top of the fifth inning when Palacios hit a two-run home run and Malia Martinez added a two-run double to put the Wildcats ahead 7-1.

Aly Manzo hit a solo home run to pull Arkansas within 7-2 in the bottom of the fifth, but Arizona answered with back-to-back home runs by Jessie Harper and Mulipola in the top of the sixth to go ahead 10-2.

Harper’s 91st career home run pulled her within four of the NCAA record. Mulipola homered twice and finished 2 for 3 with 2 walks and 3 RBI.

Hannah Gammill hit a two-run home run for Arkansas in the bottom of the sixth. It was the Razorbacks’ 95th home run of the season, which tied Arizona State for third-most nationally.

Hanah Bowen (10-3) pitched a complete game for the Wildcats. Bowen allowed 4 hits, walked 1 and struck out 8.

Mary Haff (26-7) took the loss with a 4 1/3-inning start for the Razorbacks. Haff allowed 4 earned runs on 7 hits and 2 walks, and struck out 3. The Wildcats also scored an unearned run against Haff.

Arizona improved to 4-0 this postseason, including 3-0 against SEC teams. The Wildcats defeated Ole Miss twice by scores of 12-6 during the NCAA Tucson Regional last weekend.

Arizona is attempting to advance to the Women's College World Series for the 24th time.