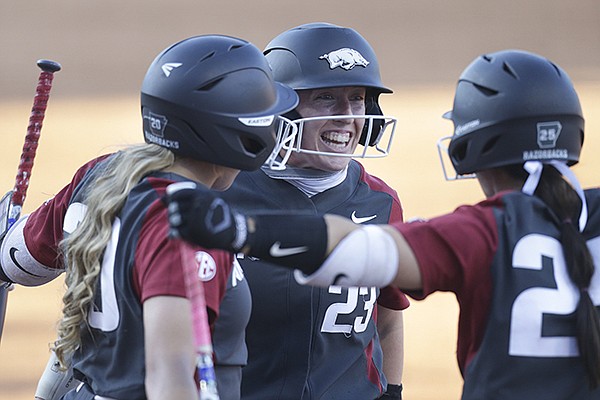 Arkansas outfielder Hannah McEwen (23) is greeted by teammates after she hit a home run during an NCAA super regional game against Arizona on Friday, May 28, 2021, in Fayetteville.

TELEVISION The game will be televised by ESPN2 and can be accessed via WatchESPN.com and the ESPN app (carrier login required).

FORECAST According to the National Weather Service, Saturday afternoon will be mostly clear with a high of 69 degrees in Fayetteville.

NOTABLE Arizona defeated Arkansas 10-4 on Friday and can advance to the Women’s College World Series with a win Saturday. The Razorbacks must win two consecutive games over the Wildcats to win the super regional….Arkansas is hosting an NCAA super regional for the first time. Tickets for the series are sold out....The Razorbacks have never played in the Women's College World Series, which is held each year in Oklahoma City….Arizona coach Mike Candrea is the winningest coach in NCAA softball history. Candrea has won eight national championships and led 23 teams to the Women's College World Series during his career, including the 2019 Wildcats....Arkansas advanced to the super regional with victories of 8-0 over Manhattan, 4-0 over South Dakota State and 7-3 over Stanford last week in Fayetteville....Arizona advanced to the super regional with victories of 7-0 over Maryland-Baltimore County and two 12-6 victories over Ole Miss last week in Tucson....Arizona is playing in a super regional for the 15th time in 16 seasons. The Wildcats have played in 34 consecutive NCAA Tournaments, which is the longest active streak in college softball....Arkansas lost its only previous super regional games at Oklahoma in 2018….SEC co-pitcher of the year Mary Haff suffered the loss Friday in 4 1/3 innings. Haff fell to 26-7 this season….Arizona's Jessie Harper has hit 91 career home runs, four shy of the NCAA record. Harper homered Friday against the Razorbacks….Arkansas' Braxton Burnside is tied for second nationally with 25 home runs. The Razorbacks have hit 95 home runs this season, which is tied with Arizona State for third-most nationally….Arizona's Janelle Meoño was the Pac-12 freshman of the year. Her .450 batting average is the best in the Pac-12....ESPN analyst Jenny Dalton-Hill was a four-time All-American and the 1996 national player of the year while at Arizona....Arkansas is 24-6 this season at Bogle Park....Arizona is 13-10 in road games....Arkansas coach Courtney Deifel was a starting catcher for California when the Golden Bears defeated Arizona in the finals of the 2002 Women's College World Series.