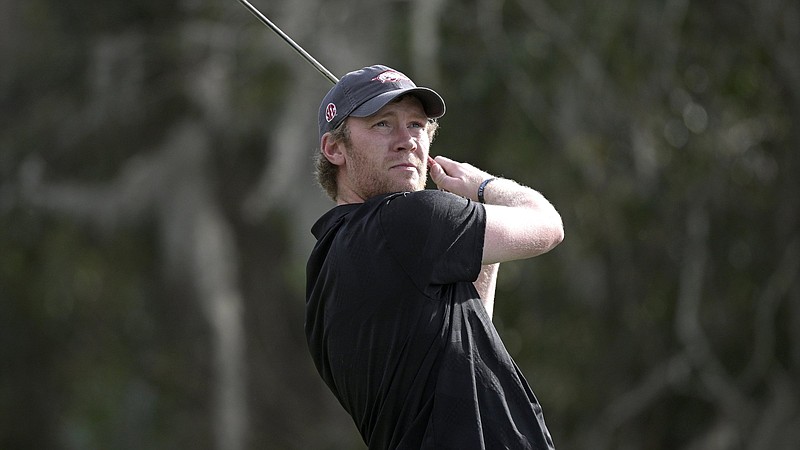 FAYETTEVILLE — William Buhl and Tyson Reeder capitalized on bonus senior seasons to help the No. 23 Arkansas Razorbacks advance to their 25th appearance at the NCAA men’s golf championships.

The 30-team championship tees off this morning at the Grayhawk Golf Club in Scottsdale, Ariz. The University of Arkansas is paired with No. 22 Texas Tech and No. 25 San Diego State for the first two rounds, starting on No. 1 today at 7:32 a.m.

Buhl and Reeder will join juniors Julian Perico and Segundo Oliva Pinto and freshman Manuel Lozada in the lineup for Arkansas Coach Brad McMakin, who is making his seventh NCAA Championship appearance with the Razorbacks.

Buhl, a dual Norway and U.S. citizen from Fairhope, Ala., and Reeder, from Edmond, Okla., were both in the running for medalist honors at the NCAA Kingston Springs (Tenn.) Regional, where the Razorbacks finished second.

“Everybody is playing really good at the moment,” said Buhl, who tied for seventh at the regional after entering the final round one stroke off the lead. “I think … we can fire on all cylinders. We’ll be a dangerous team to play against.”

McMakin called this group, which includes graduate senior Mason Overstreet as the alternate, as the best team he’s had.

“We’re going to need everybody to play their best,” McMakin said. “We really need Julian to have a good week. He’s struggled the last two weeks. But Julian is capable of winning the golf tournament. When he’s on, he’s one of the best players in the country. And Tyson and Buhl’s games are in really good shape.”

Pinto, the SEC medalist, shot an opening round non-counting 81 at The Golf Club of Tennessee in the regional before providing two counting scores.

“Obviously Segundo I think he’ll bounce back after last week,” McMakin said. “The biggest key to our golf team has been Manuel Lozada. He’s been so consistent, staying in the rounds and shooting a bunch of scores around par the last month and a half. And it should be a good golf course for him because he drives it so straight.”

The Razorbacks, who were SEC champions in 2019 before failing to qualify for the NCAA at their home course at Blessings Golf Club, got to the SEC match-play final again earlier this month before falling to Vanderbilt.

Reeder shot a 65 in the final round at the NCAA regionals to post a school postseason record 206.

“The goal for us is to win the national championship,” Reeder said. “We’ve got a really good group of guys. Everyone’s really good. Everyone is very confident in themselves.

“So we’re extremely excited, especially because two years ago kind of left a bad feeling for all of us who were playing regionals. To be back two years later and have a chance at the national championship, that’s all we could ask for.”

McMakin said consistent driving and short irons will be keys on the par 70, 7,289-yard Raptor Course at Grayhawk.

“There’s going to be a lot of short irons into the green,” McMakin said. “It’s not very long. So we’ve focused our practice this week on 100 yards in.

The Razorbacks expect to see high roughs and firm and fast greens at Grayhawk after the best women’s teams in the country struggled to shoot par on the course over the last week.

Having Buhl and Reeder back has been a boon for the Hogs. Buhl needed back surgery last year and has worked his way back into strong competitive shape and adding length to his game.

“It took me a little time to readjust after my body had been through so much change and I didn’t really play golf,” Buhl said. “I’m finally feeling I’m heading in the right direction at the right time.”

McMakin said Reeder was the first person to call him once the NCAA ruled seniors could have another year of eligibility.

“Obviously the scholarships weren’t going to be the same, and he said, ‘I don’t care what it costs. I’ll be back,’ ” McMakin said. “And he’s obviously had an incredible year. I’ve seen his game grow.

“He’s extremely talented. When we’re at tournaments, people watch him on the range. He looks like he’s one of the best players in the country.”

Reeder won a tournament at Auburn this spring and had a third-place finish at Mississippi State in the fall as a prelude to his second-place showing at Kingston Springs.

Perico, who has earned a spot in the Arnold Palmer Cup this summer, holds the top two single-season scoring records at Arkansas in addition to being the career scoring average leader (71.07).

The Razorbacks’ highest finish has been second place in 2009, the first year of the current format.