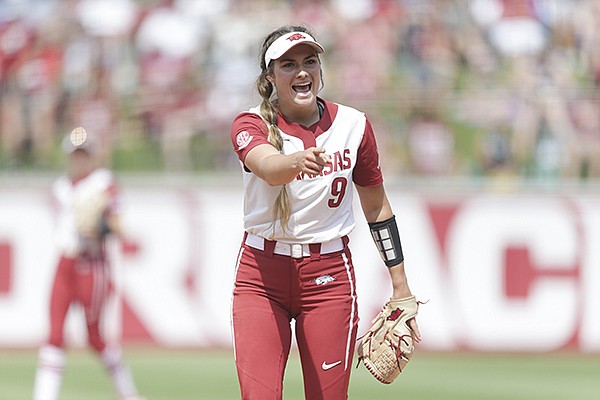 Arkansas pitcher Autumn Storms is shown during an NCAA regional game against Stanford on Sunday, May 23, 2021, in Fayetteville.

FAYETTEVILLE — Bogle Park was home to one of the largest crowds in the country on Sunday when the University of Arkansas softball team defeated Stanford 7-3 to win the NCAA Fayetteville Regional.

This weekend’s super regional is sold out. So the crowd is expected to be even larger than Sunday’s total of 2,604 when No. 6 Arkansas (43-9) takes on Arizona at 6 tonight to open the best-of-three series.

Game two is slated for a 4 p.m. start Saturday. Sunday’s game, if necessary, will begin at 8 p.m.

Arkansas Coach Courtney Deifel said she believes the crowd being in her team’s corner will be an advantage. The chants of ‘Arkansas’ and ‘Razorbacks’ reverberating around the stadium create an incredible energy, Deifel said.

“It just fuels them,” Deifel said. “It hypes them up and they’re pretty hype on their own. You just know the whole crowd’s behind you and I think it’s incredible.

Arkansas had the second-largest regional crowd in the country on Sunday, trailing only the 3,044 at Tuscaloosa, Ala. Sunday’s crowd ranked fourth all-time in Bogle Park history. And even Saturday’s crowd of 2,166 came in at No. 6.

Deifel said the big crowds last weekend were even an adjustment for her team.

“All of a sudden you’re in a barn-burner situation and you’re feeling the energy from the crowd,” Deifel said. “We had a couple nervy situations here and there. But it was nice to be able to work through that.

“It’s also nice that you know the crowd’s behind you. Be a lot different if we were in an opposing yard.”

Arkansas shortstop Braxton Burnside, whose 25 home runs are tied for second in the country, agreed that the crowd can be a difference-maker for the Razorbacks.

“We’re counting on them to be great for us,” Burnside said. “It’s just going to be something we have that Arizona doesn’t have. I think that plays a large role in our energy. We can kind of feed off them and they feed off us.”

But there won’t be many on their side this weekend in Fayetteville. Long-time Arizona Coach Mike Candrea said he knows what his team will be up against with the atmosphere. He also reminded the game is won and lost on the field.

“The fortunate part is none of those people are playing the game. So it’s still played between the lines. You know it’s going to be up to us to have quality at-bats and play the game we need to play.”

But the Wildcats haven’t done that very well on the road this season. They are only 11-10 away from home. Arizona averages more than 8 runs per game at home, but less than four on the road.

Arizona catcher Dejah Mulipola noted there’s a distinct difference between the weather in Fayetteville and Tucson after a practice at Bogle Park on Thursday.

“Yeah, the air’s definitely thicker here,” Mulipola said. “It’s definitely not Home Run U here. So I think it’s going to be very important to hit line drives and a lot of ground balls this weekend.”

But the Razorbacks have sort of made a living out of the long ball this season. They rank fourth in the country with 92. But Arizona ranks sixth with 89.

Candrea said the series will likely turn on good pitching, solid defense and timely hitting. But he said he believes the long ball will play a part, too.

Arkansas pitcher Autumn Storms is ready to go, Deifel said. The senior left Sunday’s game after turning her ankle stepping into the dugout after the top of the first inning.