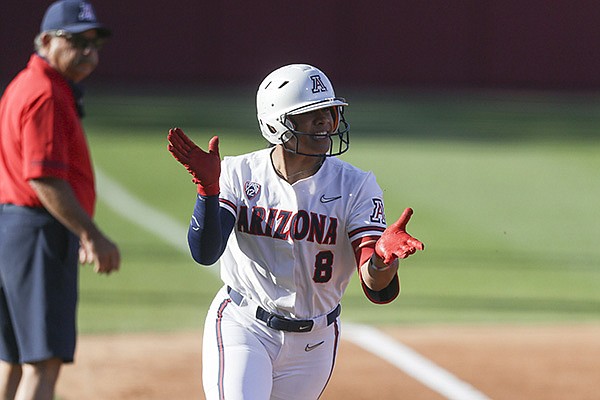 Arizona catcher Dejah Mulipola (8) runs toward home plate during an NCAA super regional game against Arkansas on Friday, May 28, 2021, in Fayetteville.

FAYETTEVILLE — Arizona leads the Pac-12 in batting average and runs scored this season, and the Wildcats gave the Razorbacks a taste of their strength Friday evening in front of a sold-out crowd of 2,700 at Bogle Park.

Catcher Dejah Mulipola hit a pair of home runs, and her teammates added two more to lead the No. 11-seeded Wildcats to a 10-4 victory over sixth-seeded Arkansas in the opener of the Fayetteville Super Regional.

Arizona (40-13) jumped in front with Mulipola’s two-run home run in the top of the first and never looked back to get within one victory of advancing to the College World Series.

“I think we need to be a little tougher [today] across the board,” Deifel said. “That just starts in our demeanor. That’s what I want to see early. If runs get produced from that, then great. But we are just gonna fight a lot harder [Saturday].

Arkansas (43-10) got home runs from Hannah McEwen, Aly Manzo and Hannah Gammill, but those were the few highlights.

Mulipola’s two-run shot in the first put the Wildcats on top, and freshman Sharlize Palacios added a two-out RBI single. McEwen’s solo home run got Arkansas within 3-1 leading off the bottom of the fourth.

Palacios kept the Wildcats rolling with a two-run home run to center field to chase Arkansas starter Mary Haff (26-7) in the fifth. Malia Martinez added a two-run double later in the inning off reliever Jenna Bloom for a 7-1 lead, and the Wildcats cruised from there. Bloom gave up 5 run on 5 hits in two-thirds of an inning.

Gammill’s two-run home run in the sixth set the final score and kept the Razorbacks from being run-ruled.

Five different Wildcats had two hits each as Arizona banged out 12 as a team. Mulipola, a 2019 first-eam All-American and member of the U.S. National Team, and Palacios drove in three runs each.

“I thought her getting us on the board early was huge,” he said. “For where we’re playing and get the crowd out of it a little bit. I thought it was a great at-bat and great thing for us to start this game off.

“I don’t want to live and die off the home run, but it’s nice when they come. I think this team understands the importance of just getting 60 feet and passing the bat.”

Arizona pitcher Hannah Bowen (10-3) retired the first nine Razorbacks she faced. She allowed 4 runs on just 4 hits over 7 innings. She struck out eight and walked one.

“We just have to stay within ourselves and understand that runs don’t roll over to [today],” she said. “We can’t make it any bigger than what it is. It’s just one win. They earned nothing more than that. We just have to get back to being us and focusing on our side of the field.”

The Razorbacks have lost back-to-back games only once this season. If it happens today, their season is over. A win would force a deciding game Sunday in the best-of-three series for a spot in Oklahoma City next week.