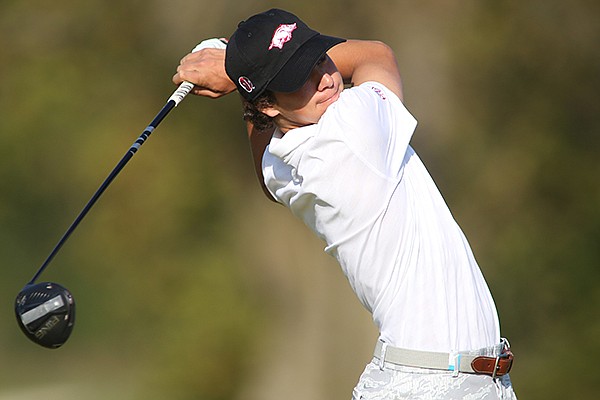 Arkansas golfer Manuel Lozada is shown during the Blessings Collegiate Invitational on Wednesday, Oct. 7, 2020, in Johnson.

Powered by freshman Manuel Lozada, the No. 23 University of Arkansas golf team posted a score of 7-over par 287 in the opening round of the NCAA Championships on Friday to land in a tie for 10th.

The Razorbacks were in position for a stronger finish, but their top four scorers lost five strokes to par on the final three holes, including a double bogey on No. 18 from Lozada, who finished at 1-under 69 on the 7,289-yard layout at the Grayhawk Golf Club’s Raptor Course in Scottsdale, Ariz.

One of Arkansas’ playing partners, No. 22 Texas Tech, had a strong round with a 4-under 276 to grab the first-round lead by two shots over Sam Houston State.

No. 9 Pepperdine was the only other team to shoot below par at 1-under 279 for sole possession of third place, followed by No. 1 Oklahoma and No. 3 Oklahoma State, who were tied for fourth at even par.

The 30 teams will play two more rounds of stroke play before the field will be cut in half for a final round of stroke play to determine the individual champion and the eight schools that will participate in match play.

Lozada spent much of his morning round in first place, including after birdies on Nos. 10 and 12 brought him to 3 under. He maintained that score until the fateful 18th.

Lozada is in a big pack of players tied for 17th place, three shots behind Cole Bradley of Purdue, who leads at 4 under. Oklahoma State’s Bo Jin, and Sam Houston State’s William Holcomb and Ting-Wei Hsieh are one shot behind at 67.

“It wasn’t the greatest start we could hope for, but I thought we played OK,” Arkansas Coach Brad McMakin said. “We didn’t finish very well, but we also didn’t shoot ourselves out of it yet.

“We will need to come back and play two good rounds, which I think is very doable. I think after having a second day to get used to the course will be important for tomorrow and moving forward. Manuel played great and Tyson [Reeder] closed well.”

Lozada got out to a strong start with a birdie on the par-4 1st hole and another on the par-5 4th. He bogeyed No. 7 to go back to 1 under for the turn.

“Manuel really played well other than that one mistake on 18,” McMakin said. “It was 17 great holes for his first national championship. To shoot 69, I mean he played really hard. He chipped in for birdie on his opening hole to set the tone and then hit two of the best shots I’ve seen in a while on holes 10 and 12 for birdies.”

Seniors William Buhl and Reeder contributed 2-over 72s but got there in different ways. Buhl birdied Nos. 12 and 13 to reach even par but bogeyed the final two holes.

Reeder, normally a par machine, had a wild day with five birdies, five bogeys and a double bogey. He had a stretch of eight holes on the front nine with just one par. Reeder was at 4 over before notching birdies on Nos. 14 and 18.

Junior Julian Perico also had a counting score with a 4-over 74 that featured five bogeys and one birdie. Junior Segundo Oliva Pinto, who was the SEC medalist three weeks ago, carded a noncounting 76 with a lone birdie on No. 17 to go along with five bogeys and a double.