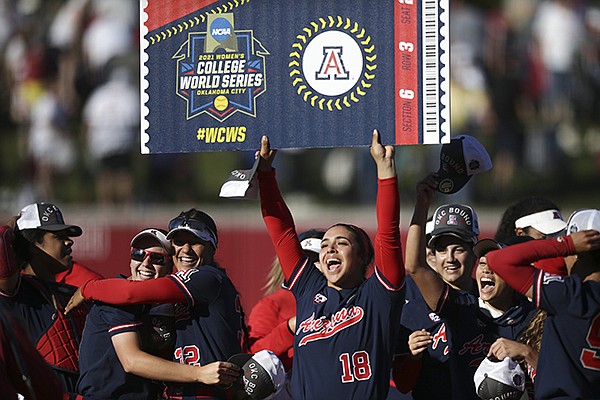 FAYETTEVILLE — Arizona came up with all kinds of offense to dominate Friday’s opening game of the NCAA softball Fayetteville Super Regional. The Wildcats got just enough Saturday to end No. 6 Arkansas’ season in front of a sold-out crowd of 2,749 at Bogle Park.

Center fielder Alyssa Palomino-Cardoza celebrated her 24th birthday with a go-ahead two-run home run to lead Arizona to a 4-1 victory over the Razorbacks and into the College World Series in Oklahoma City.

The Wildcats (41-13) didn’t have a base runner through the first 4 1/3 innings against Arkansas starter Autumn Storms, but redshirt freshman Sharlize Palacios slapped a single into left field to break up the perfect game, and Palomino-Cardoza lined the next pitch down the left-field line and over the fence for a 2-1 Arizona lead in the bottom of the fifth.

Arizona tacked on two unearned runs in the sixth thanks to a two-out, two-run single by first baseman Carlie Scupin.

That was plenty for pitcher Alyssa Denham. The senior allowed 1 run (unearned) on 4 hits over 7 innings to improve to 19-8. She struck out four and walked three.

Arkansas Coach Courtney Deifel was filled with emotion when discussing the season-ending loss. The Razorbacks (40-14) claimed a share of their first SEC regular-season title and hosted a super regional for the first time in school history.

“I’m crushed for them,” Deifel said. “This is a really special group. This is a group that had a lot of firsts and will be remembered for a lot of things that they did. But beyond that, it was my favorite group I’ve ever coached.

Arkansas broke on top in the top of the fifth when shortstop Braxton Burnside ripped an RBI double into the left-center field gap. The Razorbacks had runners at second and third at that point with just one out, but failed to get more.

Hannah Gammill struck out for the second out. Danielle Gibson worked a walk to load the bases, but Denham got Linnie Malkin to fly out harmlessly to end the threat.

Arizona came back in the bottom of the inning to grab the lead against Storms.

Burnside accounted for two of the Razorbacks’ four hits and also drew a walk. The Paragould native finished off one of the best seasons in school history, setting a single-season school home run record with 25. She came into the weekend ranked second in the country.

Arizona Coach Mike Candrea, who has guided the Wildcats to eight national championships, was pleased with how his team responded on the road in front of a large crowd.

“We beat a really good team on the road, great fans,” he said. “It was just one of those experiences you try to prepare your kids for, but you really can’t until you get here. And then I was really amazed that our kids played loose, had fun, competed hard. All the things we talked about all year, they kinda put it all together.

“It could definitely be a challenging place if you didn’t have experience that we have with our senior class.”

Storms (7-2) took the loss in the circle. The senior allowed 4 runs (2 earned) on 5 hits in the complete-game effort. She struck out two and walked one, but most importantly she gave the Razorbacks a chance to win, Deifel said.

“She’s a fighter,” Deifel said. “She’s feisty. She’s a competitor. She had her good stuff today, and she has that adrenaline with just that look in her eye that she’s gonna make you earn it.

“She hasn’t been in that many games in the last few weeks, kinda working through an injury. I thought she had a ton of guts today as she’s had her entire career.”