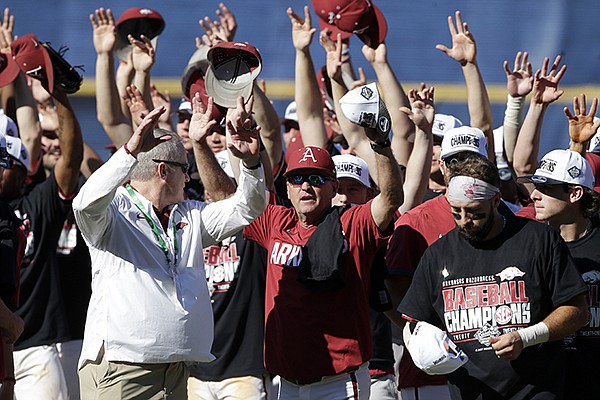 Arkansas coach Dave Van Horn, center, celebrates with the team after defeating Tennessee in an NCAA college baseball championship game during the Southeastern Conference tournament Sunday, May 30, 2021, in Hoover, Ala. (AP Photo/Butch Dill)

There can be no dispute: Arkansas is the best baseball team in the SEC.

The top-ranked Razorbacks, who won the SEC title during the regular season, defeated No. 4 Tennessee 7-2 on Sunday in the championship game of the SEC Tournament at Hoover (Ala.) Metropolitan Stadium.

Arkansas (46-10) won its first SEC Tournament championship in its fifth time to play in the title game. The Razorbacks joined the 2019 Vanderbilt and 2017 LSU teams as the only SEC teams since the league’s last expansion to win the conference tournament in the same season they won the regular-season title.

The Razorbacks won a conference tournament title for the first time since they won the 1985 Southwest Conference Tournament at George Cole Field in Fayetteville.

“It’s big for the school,” Arkansas coach Dave Van Horn said. “The trophies are going to be there after we're all gone, and they’re going to talk about it one day.”

Arkansas players presented Van Horn with a game ball after the game.

“The team kind of (came) together and said we wanted to do this for DVH," Arkansas infielder Cullen Smith said. "He might not say it but he secretly wants to win this thing every single year he’s here. I’m just glad we won it, dude."

Battles’ hit scored Smith, Gregory’s hit scored Opitz, and Battles scored on a sacrifice fly by Matt Goodheart to give the Razorbacks a 3-1 lead.

Battles homered to the left-field bullpen in the seventh to give Arkansas a 4-1 lead.

“He hung a breaking ball and I took my anger out on it,” Battles said.

Battles finished the game 3 for 4 with 2 runs scored. He also had a pair of great defensive plays to force out a Tennessee base runner at second base to end the fourth inning, and to start a double play to erase a leadoff single for the Vols in the eighth.

Battles was voted most valuable player of the tournament.

Arkansas reliever Kevin Kopps pitched the final three innings to earn his 10th save. Kopps allowed a solo home run to Pete Derkay to lead off the seventh to pull the Vols within 4-2 and scattered three singles. He struck out three.

The Razorbacks answered Derkay’s homer with three runs in the eighth inning to go ahead 7-2. Cullen Smith’s two-run home run — his third homer of the tournament — scored Robert Moore, who had a fielder’s choice RBI at the end of an eight-pitch at bat in the inning. Moore fouled off five consecutive pitches.

Tennessee (45-16), which finished second to Arkansas in the SEC regular-season standings, took a 1-0 lead with back-to-back two-out hits in the first inning. Jake Rucker doubled and scored on Drew Gilbert’s single.

That was the only run allowed by Arkansas starter Jaxon Wiggins in 3 2/3 innings. Wiggins allowed 4 hits, walked 2 and struck out 5.

Ryan Costeiu pitched 1 1/3 innings in relief of Wiggins before Lael Lockhart — who came within one out of a perfect game four days earlier against Georgia — retired all three hitters he faced in the sixth inning.

Will Heflin did not allow a hit until the fourth inning, then relinquished the lead by allowing all three runs in the fifth. Heflin, a left hander who is the Vols’ No. 2 starter, allowed 3 runs on 4 hits and 2 walks, and struck out 4.

Tennessee, which shut out Alabama and Florida in games Friday and Saturday, used seven pitchers against the Razorbacks.

“I think it’ll take a bus ride for our guys to soak up the whole deal,” Tennessee coach Tony Vitello said.

Arkansas finished the tournament undefeated in four games. The Razorbacks defeated Georgia 11-2 and Vanderbilt 6-4 in double-elimination play, and defeated Ole Miss 3-2 on Saturday in a semifinal game.

The Razorbacks improved to 3-1 against Tennessee this season and to 20-4 against 10 teams that will host an NCAA regional.

Cullen Smith homered again — his third home run of the tournament. It was a two-run shot to score Robert Moore, who had a fielder's choice RBI an at bat earlier.

Moore's RBI came at the end of an eight-pitch at bat and scored Charlie Welch. Moore fouled off five consecutive pitches.

Pete Derkay hit a home run in the first at bat against Kevin Kopps, but Kopps battled back with two consecutive strikeouts.

Max Ferguson singled up the middle with two outs. Jake Rucker flied out to end the inning.

Jalen Battles' no-doubt home run into the left-field bullpen has given Arkansas a 4-1 lead. Battles has been the MVP today with 2 RBI and a big defensive play to end the fourth inning.

Lael Lockhart sat down Tennessee in order in the sixth inning with a fly out, strikeout and foul out.

It will be interesting to see if Arkansas goes back to Lockhart for one more inning, or brings in Kevin Kopps for the seventh.

Cullen Smith grounded into a double play on a 3-2 pitch to end the top of the sixth inning. The Razorbacks had put two on with one out when Christian Franklin walked and Robert Moore was hit by a pitch.

Lael Lockhart is in to pitch the bottom of the sixth for the Razorbacks.

Ryan Costeiu worked around a two-out single by Jake Rucker in the fifth inning. Costeiu pitched well against Tennessee two weeks ago, but was taken out after 1 2/3 innings. He is pitching well again today.

Kevin Kopps is getting loose in Arkansas' bullpen.

Cayden Wallace flied out to end the top of the fifth inning. Ryan Costeiu will come back for the bottom of the fifth.

The Razorbacks have put three straight on base to lead off the fifth inning. Cullen Smith walked, Casey Opitz singled and Jalen Battles singled to score Smith and tie the game 1-1.

Zack Gregory followed with a two-strike RBI hit to score Casey Opitz. Gregory was initially ruled safe at second base with a double, but he was out on replay review, so that hit will go down as an RBI single. Gregory tried to bunt a couple of times, then hit down the right-field line when the bunt was taken off with two strikes.

Tennessee is going to the bullpen. Will Heflin ran out of gas this inning, similar to how he did in the sixth inning against the Razorbacks two weeks ago.

Jalen Battles made one of Arkansas' best defensive plays this year to end the fourth inning. He made a diving stop to his left on a hard-hit ball from Connor Pavolony and threw sitting down to Robert Moore at second base. Moore kept his foot on the bag just long enough for the force out.

Arkansas is going to the bullpen with two outs in the fourth inning. Ryan Costeiu will face Connor Pavolony with a runner on first base.

Luc Lipcius singled against Wiggins to lead off the inning. Jordan Beck and Pete Derkay followed with a pop up and a fly out.

This change is probably due to pitch count. Wiggins threw 62 pitches. He has only recently been groomed to start. This is easily his highest pitch count this year.

Charlie Welch singled with one out to give Arkansas its first hit, but he didn't advance. Christian Franklin struck out and Robert Moore popped up to the infield to end the inning.

Jaxon Wiggins worked a perfect third inning with a foul out, fly out and strikeout. He has struck out five through three innings.

Will Heflin took a no-hitter into the sixth inning against Arkansas two weeks ago. Today he has not allowed a hit through three innings.

Jalen Battles and Zack Gregory struck out, and Matt Goodheart lined out in the top of the third. Heflin is not having to throw a lot of pitches — just 36 through three innings.

Tennessee once again made Jaxon Wiggins work after he got to two outs in the inning. The Vols drew consecutive two-out walks and Liam Spence reached with an infield hit to load the bases.

The inning ended when Max Ferguson lined out to center field.

Wiggins has four strikeouts and is throwing pretty well, but he is needing to throw a lot of pitches.

Robert Moore, Cullen Smith and Casey Opitz grounded out against Will Heflin in the second inning. Smith made good contact, but Tennessee second baseman Max Ferguson made a good stop in the grass with the shift in play.

Arkansas has made good contact in a few at bats against Heflin but has no hits to show for it.

Jaxon Wiggins was electric with three strikeouts and a pitch that hit 99 mph in the first inning, but he gave up back-to-back two-out hits to Jake Rucker and Drew Gilbert that gave Tennessee the lead.

Charlie Welch walked with two outs and went to second base on a ball in the dirt. Christian Franklin put a charge into a 1-2 pitch from Will Hefley, but it was caught at the warning track in center field for the final out.

Matt Goodheart grounded out and Cayden Wallace struck out before Welch's walk.

Arkansas' series win in Knoxville two weeks ago was the difference in the Razorbacks winning the SEC regular-season championship outright. Today the Razorbacks will have a chance to win the tournament with a win over the Vols.

It is a beautiful day in Hoover with sunny skies and a temperature near 80 degrees.

Tennessee would appear to have the pitching edge today. The Vols have not had to use many pitchers the past two days and will start weekend starter Will Heflin, a left hander. Heflin took a no-hitter into the sixth inning against Arkansas two weeks ago, but allowed three runs in six innings.

Arkansas will counter with right hander Jaxon Wiggins, whose worst outing was two weeks ago at Tennessee when he allowed three runs on a walk-off home run in the ninth inning. Wiggins pitched well in a short start last week against Florida.

The Razorbacks will keep the same lineup as yesterday, with one exception: Zack Gregory will replace Ethan Bates in right field.