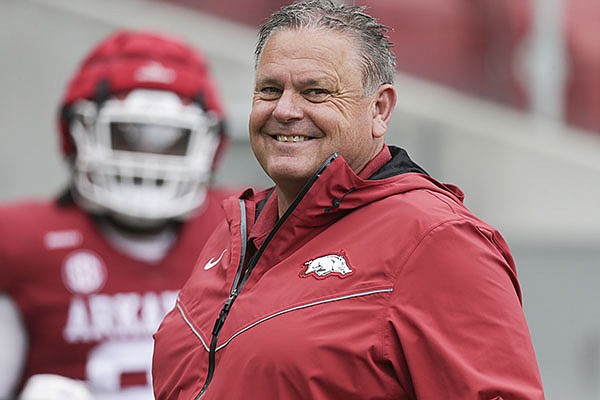 Sam Pittman has established himself as an outgoing, charismatic leader.

When he came to the Arkansas Razorbacks, the football program was on the rocks. The least of the beasts of the SEC.

He inherited four years of neglect, but Pittman did the thing he knows how to do best: Roll up his sleeves, go to work and be a leader.

He not only has worked tirelessly with his team and staff but also to help rebuild a relationship with the fan base.

Pittman has had more town meetings than 10 dozen mayors in 20 dozen cities.

For him, it is not a chore but a privilege to represent the Razorbacks football program. So when he was asked by the Boys and Girls Club of Central Arkansas to be honored with its Leader of the Year award, he said yes sir.

A banquet honoring Pittman will take place on the field of War Memorial Stadium in Little Rock at 6:30 p.m. on June 10.

The event is open to the public and anyone wanting more information, tickets or a sponsorship can go to bgcofca.com/events. Anyone with questions can call Cindy Doramus at (501) 666-8816 or Fred Roberson at (501) 681-0074.

It is expected to be a Hog-calling fun event.

More importantly, it is one more stone in place in the Razorback foundation.

It is early, very early, but here’s a very bold prediction for the football season.

When the Rice Owls visit the Arkansas Razorbacks on Sept. 4, Reynolds Razorback Stadium will not run out of bottled water like it did several times a few years ago.

The game is currently scheduled for a 1 p.m. kickoff.

Your trusty scribe is not a meteorologist or a weatherman, but it is safe to say it is going to be hot. Very hot. Hot enough that no player on the sideline is likely to be wearing a helmet.

Normally the finger of guilt for this obviously bad kickoff timing would be pointed at TV, but this game is on ESPN-Plus. Streaming could care less what time the game kicks off.

Hopefully someone, somewhere will get this game moved, even if its the not-very-popular 11 a.m. slot.

Arkansas’ second game is against always disliked Texas, and it is set for 6 p.m. ESPN grabbed this game because of the history that dates way back to the old Southwest Conference.

The third and final game that has been announced is Georgia Southern, and it is also going to be smoking hot with a 3 p.m. start on Sept. 18.

There used to be an unwritten rule — long before every game was televised — that you didn’t play night games in November. Now there needs to be a rule of no afternoon games in September.

On a personal note, while driving through Oklahoma last week the screen in my vehicle flashed: Emergency Weather Alert.

At the punch of a button, this huge storm appeared on the screen in red, orange and yellow. My vehicle was headed toward what at that time appeared to be the tail end of it.

There was a tornado and heavy hail warning.

The highway took a few turns, and 14 minutes later it started to rain. A glimpse at the radar showed we were entering the middle of the storm.

The sky went black and the rain turned into the worst storm ever personally witnessed.

In a matter of seconds, visibility was less than 25 feet and we were going 30 mph.

Apparently all the smart people had pulled off the road, leaving us alone on Interstate 40.

It was the longest 15 minutes of my life. If it ever happens again, I’ll be a lot smarter and be the first to get off the interstate.