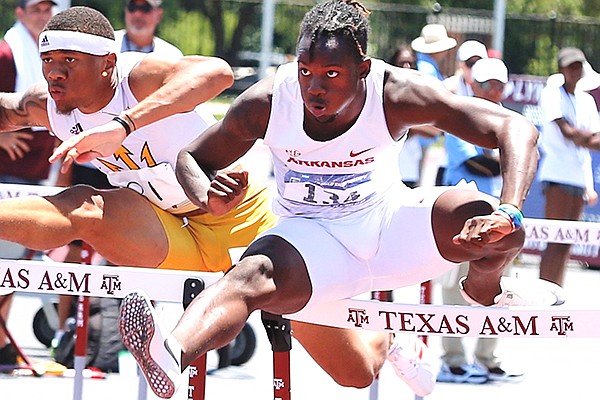 Arkansas' Phillip Lemonious competes in the 110 hurdles during the NCAA West Prelims on Saturday, May 29, 2021, in College Station, Texas.

The University of Arkansas men’s track and field team advanced 12 athletes, including two relay teams, to the NCAA Outdoor Track and Field Championships during the West Prelims which concluded Saturday night in College Station, Texas.

Senior Amon Kemboi capped the West Prelims for Arkansas by running 14:00.96 to take fifth in the 5,000 meters.

The top 12 finishers in each event advanced to the NCAA Championships, which will be held June 9-12 in Eugene, Ore.

The Razorbacks’ 400 relay team of Josh Oglesby, Kris Hari, Roman Harper and Jalen Banks qualified for the NCAA Championships by running a season-best 39.26 to take seventh.

Arkansas senior LaQuan Nairn went a personal-best 52-8 in the triple jump on Friday night — before lightning and heavy rains postponed most of the the men’s events until Saturday — for the No. 9 mark to advance. He was 17th going into his third and final jump at 51-2 1/4 before improving by nearly a foot and a half to move up eight spots.

Senior Gilbert Boit advanced to the NCAA Championships by taking second in the 10,000 for the Razorbacks on Wednesday night. Arkansas decathletes Markus Ballengee and Daniel Spejcher previously had qualified for the national meet.

Arkansas State University senior Bennett Pascoe, from Conway, won the 3,000-meter steeplechase and broke his own school record by running 8:37.45 Saturday to advance to the NCAA Championships.

ASU junior Eron Carter, who came into the discus ranked 44th in the West, threw a personal-best 186-1 to finish ninth and advance to the NCAA Championships. His mark ranks No. 3 on ASU’s all-time list.

University of Central Arkansas senior Zachary Jewell, from Mena, took sixth in the 100 in 10.17 to advance.