Smith steps up in absence of star slugger 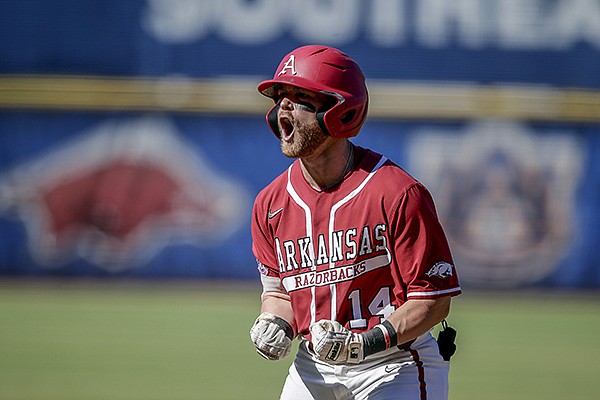 Arkansas' Cullen Smith celebrates after hitting a two-run home run against Tennessee in the eighth inning of an NCAA college baseball championship game during the Southeastern Conference tournament Sunday, May 30, 2021, in Hoover, Ala. (AP Photo/Butch Dill)

When Brady Slavens sprained his ankle during Arkansas’ game against Georgia last Wednesday, Cullen Smith replaced him as the Razorbacks’ first baseman.

Smith also made up for Slavens’ lost presence at the plate during the SEC Tournament. Slavens, who has 13 home runs, 27 extra-base hits and 60 RBI, was missed a little less because Smith finished the tournament 5 for 14 with 7 RBI and 7 runs scored.

“We want to get Brady back, but it was great that some guys picked us up,” Arkansas coach Dave Van Horn said. “Cullen definitely did that, and that was great to see.”

Smith hit his third home run of the tournament Sunday to cap the scoring in Arkansas’ 7-2 win over Tennessee in the championship game.

Smith’s two-run home run in the eighth inning punctuated a three-run inning and gave the Razorbacks some breathing room.

“Honestly, I thought Cullen was going to win MVP of the tournament because he was outstanding every game,” said Arkansas shortstop Jalen Battles, who was named the tournament’s most valuable player.

Smith also hit home runs against Georgia and Ole Miss during the tournament. His two-run homer in the first inning against the Rebels on Saturday proved to be a pivotal swing in the Razorbacks' 3-2 victory.

Smith had six home runs and 23 RBI during the regular season.

“I finally feel like I'm swinging the bat how I need to swing the bat my whole entire career,” said Smith, who transferred from East Tennessee State following the 2019 season and sat out last year due to transfer rules. “Not to say I thought I was swinging it bad, but I feel like I'm finally breaking out of that shell.”

Smith was passed over in All-SEC Tournament voting. Tennessee first baseman Luc Lipcius, who was 6 for 19 with 3 RBI and 5 runs in 5 games, was voted to the team by media members.

“Cullen Smith, he was amazing this weekend,” Van Horn said. “I don't know if he made the all-tournament team, but he's all-tournament to us. Base hits, home runs, played really good defense, had to flip over from his regular position of third base to first and played it great — he just likes to play, and sometimes we have to calm him down a little bit he gets so excited.”

Smith, who grew up in Nashville, Tenn., indicated beating the Volunteers meant a little extra. He said he began playing better during a trip to Tennessee two weeks ago when he went 3 for 9.

“I’d be lying to you if I said I didn't want Tennessee to beat us in the SEC Championship, that's for sure,” Smith said. “I’m just glad we won it. This is a dream come true for me. I'm glad I chose to go to the University of Arkansas, that's for sure.”