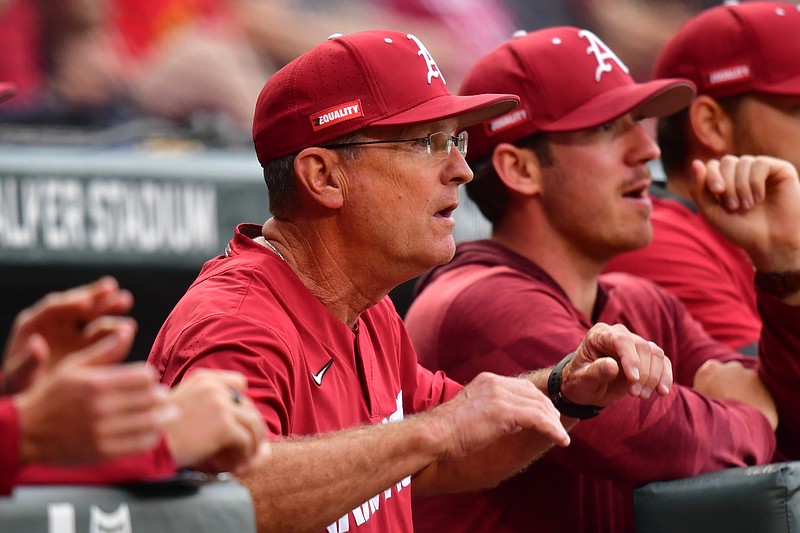 Dave Van Horn looks on from the Arkansas dugout during the Razorbacks' 6-1 win over Florida on Thursday, May 20, 2021. Picture courtesy Walt Beazley and the SEC Media Pool.

FAYETTEVILLE — Arkansas earned the No. 1 overall seed in the NCAA Tournament for the first time Monday.

The SEC-champion Razorbacks (46-10) will host New Jersey Institute of Technology (26-22) in the NCAA Fayetteville Regional on Friday at 2 p.m. The Highlanders won the America East Conference Tournament on Saturday when the championship game against Stony Brook was canceled.

NJIT was awarded the automatic bid from the conference because it was the only undefeated team in the tournament.

What to know about the Fayetteville Regional field

Arkansas and NJIT have two of the longest win streaks entering the postseason of eight and nine games, respectively.

The double-elimination Fayetteville Regional will also include Nebraska (31-12) of the Big Ten and Northeastern (36-10) of the Colonial Athletic Association. Nebraska is coached by Will Bolt, a former player under Arkansas coach Dave Van Horn when Van Horn was coach of the Cornhuskers.

The Nebraska-Northeastern game will be played Friday at 7 p.m.

The winner of the Fayetteville Regional will be paired against the winner of the Ruston (La.) Regional in a best-of-three-game super regional series next week. The Ruston Regional includes host Louisiana Tech along with North Carolina State, Alabama and Rider.

Since the NCAA changed to its current baseball tournament format in 1999, No. 1 overall seeds have advanced to the College World Series 14 times, but only one top national seed — Miami in 1999 — won the national championship.

Arkansas is hosting a regional for the fourth consecutive postseason and for the ninth time overall.

Top-eight seeds are in line to host a super regional if they win their regional. Other top-eight seeds this year are, in order, Texas, Tennessee, Vanderbilt, Arizona, TCU, Mississippi State and Texas Tech.