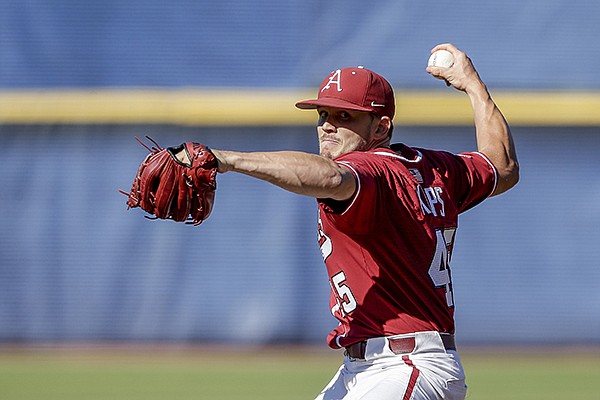 Tennessee Coach Tony Vitello alluded to Arkansas pitcher Kevin Kopps as the Golden Spikes Award winner during his postgame remarks following a 7-2 loss to the Razorbacks in the SEC Tournament Championship Game on Sunday.

“I mean, if there’s ever a situation for your team to quit, it’s with the Golden Spikes Award winner on the mound and a pretty sizable lead,” Vitello said. “We got guys trying to back pick on their own, quality at bats against a guy who’s been tough on everybody all year long.”

Arkansas infielder Cullen Smith also advocated for Kopps to win the award, which is presented by USA Baseball to the nation’s best amateur player.

“I think this guy should win the Golden Spikes,” Smith said after Kopps pitched the final three innings to earn his 10th save to go along with 10 wins. “I’ve never seen anything like this. In my five years in college baseball, I’ve never seen a pitcher so dominant in my whole entire life, and he’s an even better guy. He absolutely deserves it.”

Kopps allowed a solo home run to the first batter he faced Sunday, Pete Derkay, but his ERA of 0.81 in 66 1/3 innings remains the lowest in college baseball. Kopps allowed four hits and struck out four batters against the Volunteers.

Kopps has already been named a semifinalist — along with teammates Christian Franklin and Brady Slavens — for college baseball’s other national player of the year award, the Dick Howser Trophy. The Howser Trophy, which is voted on by baseball writers, differs from the Golden Spikes in that it is designated for the best player in NCAA Division I.

D1Baseball and Baseball America project eight SEC teams to make the NCAA Tournament field when selections are announced today at 11 a.m. on ESPN2.

Arkansas, Vanderbilt, Tennessee and Mississippi State are projected national seeds by the sites. All four teams — plus Ole Miss, Florida and South Carolina— were announced as regional hosts Sunday night.

The SEC’s seven regional hosts were more than double the next closest conferences. The Big 12 (Texas, TCU and Texas Tech) and Pac-12 (Arizona, Oregon and Stanford) had three hosts apiece.

Other hosts in the tournament include Notre Dame of the ACC, East Carolina of the American Athletic Conference and Louisiana Tech of Conference USA.

Arkansas is 20-4 combined this season against 10 teams that are hosting a regional.

There is no consensus on which teams will be sent to Fayetteville for the regional that is scheduled to begin Friday. D1Baseball projects a Fayetteville Regional field of Arizona State, Pittsburgh and Norfolk State, while Baseball America projects a field of Oklahoma State, North Carolina-Wilmington and Jacksonville.

Arkansas shortstop Jalen Battles was named SEC Tournament MVP after going 3 for 4 with a home run, driving in two runs and making a superb defensive play in the title game.

Added Battles, “Honestly, I thought Cullen was going to win MVP of the tournament because he was outstanding every game.”

Arkansas freshman pitcher Jaxon Wiggins bounced back from his last appearance against Tennessee with a solid start into the fourth on Sunday.

Wiggins served up Max Ferguson’s three-run walk-off homer for an 8-7 Tennessee win May 15 in the Volunteers’ lone victory in the three-game series against the Razorbacks.

“I feel like he was highly motivated to pitch well against Tennessee because he gave up that home run and it didn’t go good,” Arkansas Coach Dave Van Horn said. “It’s baseball. That’s the way it happens.

“Yeah, he was highly motivated. What we wanted out of him was exactly what he gave us. We were hoping he’d give us three, maybe four [innings], and that’s what he did.”

Wiggins pitched three shutout innings of a start in the Hogs’ 9-3 win over Florida last Saturday to conclude the regular season.

“I think he was able to get back on is feet his last outing and it showed in this outing,” Arkansas closer Kevin Kopps said on the SEC Network. “He’s got incredible stuff. He’s incredibly talented and he just needed that little bit of a boost to get going.”

Arkansas shortstop Jalen Battles turned in the defensive play of the game in the fourth inning.

Battles ranged to his right to to make a diving stop of a sizzling ground ball in the hole by Tennessee catcher Connor Pavolony with Luc Lipcius running from first. Battles quickly rolled over and, from his backside, threw to second base for a force play. Second baseman Robert Moore had to dive to his right to make the catch, but his left foot held the bag as the relay settled into his glove.

An official replay review confirmed the out call on the field.

“That’s probably one of the best plays I’ve made in my entire life, so it was fun,” Battles said.

Arkansas won its first SEC Tournament championship Sunday, but the program had won a conference tournament before.

The 1985 Razorbacks won the Southwest Conference Tournament with a 10-6 victory over Texas at George Cole Field in Fayetteville. Van Horn was in his first season as an Arkansas graduate assistant that season.

Zebulon Vermillion will undergo on MRI on his injured right arm today, Dave Van Horn said, and the results of that test will determine whether the fourth-year right-hander is available for Arkansas’ regional games.

Vermillion took himself out of Saturday’s semifinal game against Ole Miss after three pitches with what Van Horn described as bicep cramping.

Arkansas improved to 26-8 this season against SEC teams.

The 26 wins are tied with the Razorbacks’ 1999 SEC championship team for the program’s most against conference opponents in a single season.

Tennessee scored first in all four games against the Razorbacks this season but wound up going 1-3 vs. Arkansas.

Tennessee had leads of 5-0 and 3-0 in the first two games of their regular season series in Knoxville, Tenn., on May 14-16. The Razorbacks rallied for a 6-5 win in the opener, then got the lead in the second game before the Vols won on Max Ferguson’s walk-off three-run homer.

Tennessee held 1-0 leads in the final two games between the teams, with Arkansas winning 3-2 in Knoxville and 7-2 on Sunday.

• Coach Dave Van Horn won a Division I conference tournament for the fourth time. His Nebraska teams won the Big 12 Tournament in 1999, 2000 and 2001.

• Arkansas became the 20th Western Division team to win the SEC Tournament in the last 25 years it has been played.

• The No. 1 seed has won the last two SEC Tournaments: Vanderbilt in 2019 and Arkansas on Sunday.

• The tournament featured a record 294 strikeouts, breaking the previous mark of 288 in 2018, and a record 9.0 strikeouts per nine innings.

• Umpire Tony Walsh worked his record sixth SEC Championship Game behind home plate in his 31st tournament and his 24th in a row.

• Tennessee starter Will Heflin became the first pitcher to start two games in the tourney since LSU’s Caleb Gilbert in 2018.