Road to Omaha begins with Arkansas on top 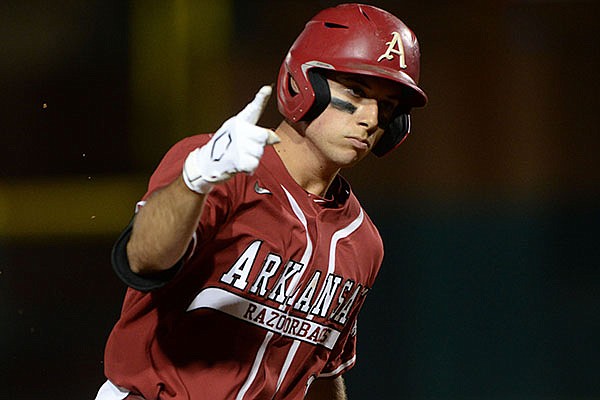 Arkansas second baseman Robert Moore runs the bases after hitting a home run during a game against Florida on Friday, May 21, 2021, in Fayetteville.

OMAHA, Neb. — Arkansas was rewarded Monday for its dominant run through the Southeastern Conference, landing the No. 1 national seed in the NCAA baseball tournament.

The Razorbacks (46-10) won all 10 of their SEC series and wrapped up their first conference tournament championship Sunday. After losing three straight games in March, the Hogs never lost consecutive games.

This is the third tournament in a row that Arkansas has been a top-eight national seed.

“It’s still really special just to sit there and see your name called,” Arkansas coach Dave Van Horn said after his team gathered to watch the selection show. “Such a good season up to this point.”

The 64-team tournament opens Friday in 16 regionals. Winners advance to eight best-of-three super regionals. Those winners move on to the College World Series in Omaha.

The top eight national seeds are assured of hosting super regionals if they win their regionals.

Texas has its highest national seed since it was No. 2 in 2010, and the program will be making its NCAA-best 60th appearance in the tournament.

Tennessee, at No. 3, is hosting a regional for the first time since 2005, the year the Volunteers last advanced to the CWS. There was a more relaxed vibe around the team on Monday compared with in 2019, when the Vols barely made the tournament with a losing SEC record.

“Guys are playing hacky sack two minutes before the (selection show) starts,” Tennessee coach Tony Vitello said. “Really, after 30 minutes of the show or when we knew who we would play in Game 1, they kind of were ready to move on.”

Vanderbilt, making its SEC-best 15th straight tournament appearance, will be going for its third national championship since 2014 after winning the title two years ago. There was no tournament in 2020 because of the covid-19 pandemic.

Baylor would be first in line to replace any team that can't play its regional because of failure to clear covid-19 testing protocols.

Altier said the opinions of regional advisory committees weighed heavily in the decision-making. Typically the RPI, or rating percentage index, helps the committee decipher teams' comparative strengths, but it wasn't as useful this year because several conferences didn't play outside their leagues.

“It was an incredibly difficult year,” Altier said. “Nobody experienced covid before. We look at the RPI as a tremendous metric for us to help us evaluate, and in a year where you cannot play everybody across the conferences as typically you would do, it makes it difficult to choose.”

Other notes about the tournament:

• Old Dominion (42-14) is the top seed in the regional hosted by South Carolina. The Gamecocks are No. 2. Old Dominion did not submit a bid to host.

• Florida State (30-22) has the longest active streak of tournament appearances at 43.

• Big Ten regular-season champion Nebraska's appearance in the Arkansas regional creates one of the top early storylines. Razorbacks coach Van Horn led the Cornhuskers to their first two CWS appearances in 2001-02, and current Nebraska coach Will Bolt was a middle infielder and captain on those teams.

• Fairfield (37-3) became the first Metro Atlantic Athletic Conference team to earn an at-large bid. The Stags won 28 straight to open the season and finished the regular season 35-1. Their .925 winning percentage is the highest in Division I history.

• Jacksonville (16-32) has the worst record in the field. The Dolphins went 3-15 in the ASUN Conference before winning the league tournament.