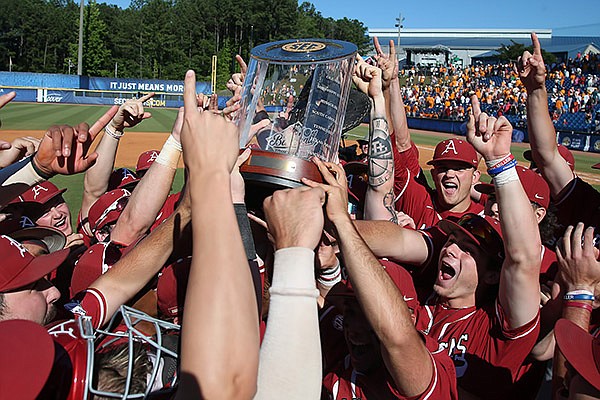 Arkansas players hoist the SEC Tournament championship trophy after defeating Tennessee 7-2 on Sunday, May 30, 2021, in Hoover, Ala. (SEC pool photo)

The No. 1 Arkansas Razorbacks put an elusive trophy in their case on Sunday to stack on top of their SEC regular-season championship.

The University of Arkansas followed a familiar script, rallying from an early deficit with lots of late offense to beat No. 4 Tennessee 7-2 before a crowd of 10,176 at the Hoover Met to claim the program’s first SEC Tournament title.

Arkansas (46-10) won in its fifth appearance in the SEC Championship Game and denied the Volunteers (45-16) their first tourney title since 1995, when they won the SEC East Tournament.

Tournament MVP Jalen Battles and Cullen Smith both hit home runs and SEC pitcher of the year Kevin Kopps pitched the final three innings to record his 10th save and earn a rare pitching double-double to pair with his 10 wins.

Coach Dave Van Horn won his first SEC Tournament title in his third appearance. He let the team know how much the hardware in Hoover meant to him and the coaching staff.

“I think they knew that I wanted to win it and I made sure that they knew that,” Van Horn said. “We were here to win because that’s the way they’ve been playing for us all year. Didn’t want them thinking we were going to hold back or hold back this guy or that guy, saving them for down the road. This is a big tournament, and we wanted to win it.”

“Tough one for everyone involved with our program to lose,” Vitello said. “The least you can say, there was a clear-cut winner today, so kudos to Arkansas.

“They would have been the No. 1 national seed even if they wouldn’t have done anything here. So it’s kind of what you measure yourself up against.”

The Razorbacks gave Van Horn the game ball, one of his first that wasn’t based on a milestone win like his 500th or 700th win.

“Maybe they thought I wanted to win it more than anything,” Van Horn said. “Really, I just wanted to play good and fight today. Like I said earlier, we let them know that we were all in, man. We were going after it, and they did it.”

Van Horn appeared feisty after delivering a brief post-game talk to the players moments before streamers rained down on the Razorbacks.

“The team kind of bonded together and said we want to do this for DVH, man,” Smith said referencing Van Horn. “We want to get this thing done for him.”

Said Battles, “That’s probably the most fired up we’ve seen Coach in a while. He’s always locked into the game. Seeing that brought the fire to us as well.”

Arkansas will enter the NCAA postseason with the most victories in Division I baseball and an almost certain lock on the national No. 1 seed when the NCAA bracket is released today. The Razorbacks opened the season with a 3-0 record vs. ranked teams in the College Baseball Showdown and finished the SEC portion of their schedule with a 4-0 record in Hoover, including wins over No. 3 Vanderbilt, No. 11 Ole Miss and the fifth-ranked Vols.

Arkansas went 3-1 against Tennessee, which is thought to be in position to claim the No. 2 national seed.

“You look at our schedule this year, it’s ridiculous,” Van Horn said. “And the number of wins that we have against teams that are ranked in the top 25, it’s got to be 20 or more, it seems like. Honestly, it just seems like that’s all we play is top 25 teams.”

The Razorbacks improved to 20-4 against the current USA Today Coaches poll top 25 and 12-2 against teams that were ranked in the top 10 at the time of the game.

Smith hit a tournament-high three home runs, including a two-run shot in the eighth inning to turn the Razorbacks’ 5-2 lead into 7-2 advantage. The big swing came after Robert Moore’s fielder’s choice ground out drove in a run and Tennessee closer Sean Hunley made several unsuccessful pickoff throws to first base.

“I was just sitting on a heater, dead red there, man,” Smith told the SEC Network. “I didn’t think it was going out of the park to be honest with you. I was just hoping it would go over his head.”

Battles went 3 for 4 in the title game, with 2 runs scored and 2 RBI. He came back into the dugout after making an exceptional defensive play in the bottom of the fourth and played a key role as the Razorbacks finally broke through against Tennessee starter Will Heflin (2-3).

Battles made a diving stop to his right on a sharp ground ball in the hole, rolled over, then, from the seat of his pants, threw out a base runner to Moore at second base for a force out to end the fourth.

“It was such a great play,” Van Horn said. “I think the players just appreciate the guy going headlong, getting the ball in his hand and making a throw to Robert from the ground. I think just ground level, it was a big time play, and it just excited everybody.”

With Arkansas trailing 1-0, Smith led off the fifth with a walk and he moved up 90 feet on Casey Opitz’s pull single through the left side. With the Volunteers possibly anticipating a bunt from Battles, he went the other way with a single through the right side to plate Smith.

Zack Gregory followed with a shot down the right-field line to score Opitz, though he was thrown out at second base on the play. Matt Goodheart made it a 3-1 game with a sacrifice fly to left field.

The score remained the same until an incentivized Battles drove a breaking ball from Kirby Connell over the left-field wall for his fifth home run.

“The first pitch, he quick pitched me,” Battles said. “In my head, I’m like ‘Really dude? It kind of made me mad. I was expecting another off-speed pitch, and he hung a breaking ball, and I took my anger out on it.”

Arkansas starter Jaxon Wiggins gave up a first-inning run on Jake Rucker’s two-out double and Drew Gilbert’s RBI single. But the freshman provided 3 2/3 innings in front of Ryan Costieu (8-2) and Lael Lockhart, who pitched a spotless sixth inning after winning the Razorbacks’ tournament opener over Georgia with 6 2/3 perfect innings.

Kopps allowed a solo home run to Pete Derkay, the first batter he faced, and gave up three other singles, but notched three strikeouts and a double-play grounder for another multi-inning save.

The Razorbacks turned a 4-2 lead into a borderline rout with a three-run eighth inning.

Cayden Wallace was hit by a pitch to start the frame, then designated hitter Charlie Welch, who went 2 for 3 with a walk to raise his average to .426, followed with a single. Hunley struck out Christian Franklin on high heat, but Moore beat out a potential double-play ball to set up Smith’s dagger homer.