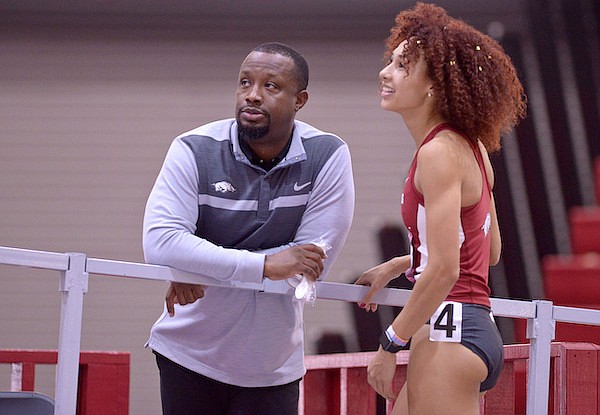 As an Arkansas assistant coach, Greene hired Johnson to be a graduate assistant for sprinters and hurdlers prior to the 2003 track and field seasons.

Johnson’s older brother, Lawrence, had also been a GA for Greene. Lawrence Johnson went on to become a six-time conference champion head coach in four seasons at Clemson, and when he called Greene inquiring about an entry-level position at Arkansas for Chris — then a middle school teacher and high school track coach in Beaumont, Texas — Greene did not need much convincing.

Chris Johnson At a Glance

NOTEWORTHY Johnson is married to the former Gigi Miller, who was a national champion heptathlete at Arkansas in 2001….The USTFCCCA has named Johnson its national assistant coach of the year three times (2018 outdoors; 2019 and 2021 indoors)….Johnson will be the first Black head coach of a women’s sport at Arkansas.

Nearly two decades since his arriving in Fayetteville, Chris Johnson is in line to succeed Lance Harter as the Razorbacks’ women’s track and field head coach.

Arkansas athletics director Hunter Yurachek announced Tuesday that Johnson will be promoted to head track and field coach following the 2023 outdoor season, when Harter will retire at the end of his 33rd season with the Razorbacks. Johnson will also oversee the cross country program, but said he will hire a distance coach to coach the cross country runners.

Greene coached for Harter for 16 seasons until 2012, when he was hired as a head coach at Purdue. He recommended Johnson — who was in his eighth season as an assistant at Penn State — to be his successor on Harter’s staff.

“I said you’ve got to go get one of the guys who came from my tree because you have a national championship team on this campus and you don’t want someone to come in here with a completely different philosophy and throw this off,” Greene said. “I said, ‘You’ve got to go get Chris Johnson….We coach alike, we’ve got the same philosophies, we do the same things the same way.’

“The rest is history. (Three years) later, they won the national championship indoors. I remember hugging both of them with tears in my eyes because I knew the team was in place that could win it. We had been trying to build that for a while.”

Greene said the Razorbacks made the right choice in promoting the 44-year-old Johnson to replace Harter.

“If they didn’t, it would have been a punch in the jaw,” Greene said. “Coaches are promoted and pursued from the quality of their work….He has done nothing short of excellent work.”

Johnson has spent the past 11 seasons as Arkansas’ assistant coach who oversees sprints and hurdles. Harter credits Johnson for the Razorbacks’ longest sustained stretch of team championship success.

In 2019, Johnson had 25 All-Americans during the indoor and outdoor seasons.

“The program shifted to what I would call a balanced program,” Greene said. “When we were there we were known as a distance program, and (pole vault coach Bryan Compton) and myself, we would support what Lance was doing in the distances. In the Southeastern Conference, Lance dominated and would put 100 points on the board, and all Bryan and myself had to do was find 30 and we would be conference champions.

“At the end of the day, what we do rises and falls on recruiting…and I think Lance has given Chris the latitude to be dynamic in the living room with the mother and father and say, ‘We’ll take care of your child and we’ll make sure she’s successful academically and athletically.’

“Chris runs a tight ship, but he also loves them, and when the kids know the coach loves them — the same thing you see with Lance — they will run through the wall and back for you, and ask you what else you need them to do.”

Payton Chadwick was one of Johnson’s early recruits to Arkansas. Chadwick, who grew up in Springdale, transferred to the Razorbacks in 2015 after one season at Oklahoma.

At Arkansas, Chadwick was the 2018 NCAA indoor champion in the 60-meter hurdles.

“Coach Johnson expects a lot from his athletes, but that’s what you want from a coach,” Chadwick said. “You want to go into a college program to succeed; you’re not going there just to stay at the same level.”

During a December 2019 interview, Harter indicated he would like to have a hand in choosing his successor, and indicated he would want it to be someone who had been part of the program. Chadwick said she is happy to see a familiar face will remain in charge.

“I like keeping around the same people,” Chadwick said. “If it works, it works. It seems to work, so I think it’s a great choice and hire by Yurachek to continue with what’s working. Coach Johnson will be able to continue the Arkansas Razorback legacy of winning championships.”

“They asked me why they should hire him,” Greene said. “I said, ‘If you go for him, you need to get out of the way and let him paint his masterpiece.’ He is the next shooting star in the business; he’s already one, but I think what you’ve seen from him is just the tip of the iceberg.

“If they let him be creative, you will see the exact same thing you’ve been seeing from Lance. I think Mr. Yurachek sees that light in Chris — I think he sees it enough that he can see a superstar when he’s got one, and Chris is a superstar.”