Razorbacks get revenge, move on to SEC semifinals 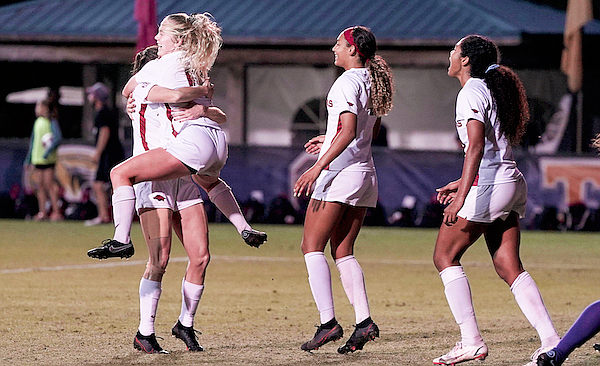 Arkansas players celebrate a goal during an SEC Tournament game against LSU on Tuesday, Nov. 2, 2021, in Orange Beach, Ala.

Arkansas got a little revenge with a 2-1 win over LSU in the quarterfinals of the Southeastern Conference women’s soccer tournament on Tuesday evening at Orange Beach, Ala.

The top-seeded Razorbacks (15-3) got two goals from Anna Podojil to knock off the ninth-seeded Tigers, who had stopped Arkansas’ 14-game winning streak five days earlier with a 4-2 loss in Baton Rouge, La., to end the regular season.

Podojil’s goal in the 18th minute put Arkansas on top and the All-SEC first-team forward added another in the 61st minute for a 2-0 advantage and what turned out to be the game winner. Those were her team-high 12th and 13th goals of the season.

LSU (11-7-1) scored its lone goal in the final minute, but Arkansas was able to hold on and advance. Parker Goins, who recently became the Razorbacks’ all-time points leader, picked up her team-high ninth assist on the first goal.

The Razorbacks will play fifth-seeded Auburn in the semifinals at 5 p.m. on Thursday. The Tigers defeated South Carolina 2-1 on Tuesday.

With a win Thursday, Arkansas would reach its sixth consecutive SEC Tournament final. However, Arkansas has yet to claim a tournament title.

Second-seeded Tennessee will face third-seeded Ole Miss in the other semifinal.

Arkansas out-shot LSU 15-7, including a 4-3 advantage on shots on-goal. Razorbacks keeper Hannah Warner picked up two saves, but the Tigers found the back of the net with their final shot of the night.