Bulldogs no easy chore under Leach 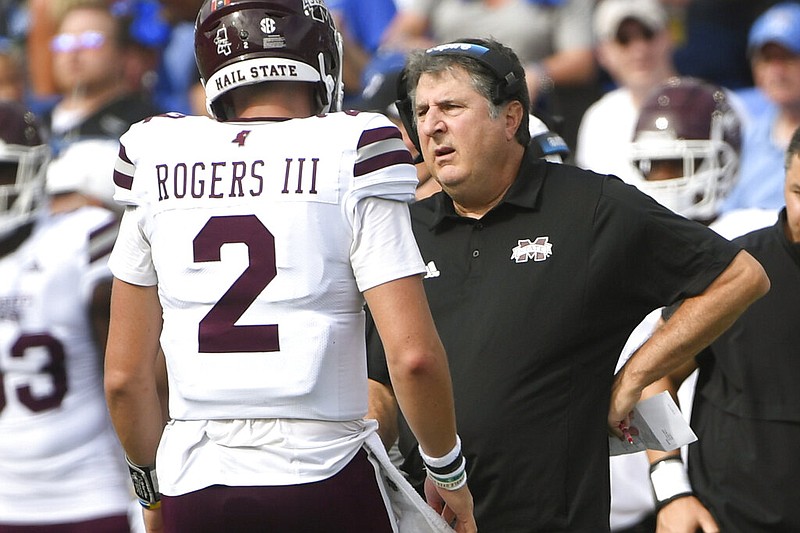 Sometimes, during interviews, it seems like he has 10,000 random thoughts per minute.

Mike Leach has a law degree from prestigious Pepperdine Caruso School of Law and he’s the head football coach at Mississippi State.

He’s the mastermind behind the Air Raid offense.

There’s nothing obviously conventional about the head coach of the Bulldogs.

He graduated from Brigham Young but never stepped foot on the football field. He’s one of a handful of college coaches who didn’t play in college.

Leach got his first coaching job when he was 26 and he paid his dues as offensive line coach at Cal Poly San Luis Obispo, linebackers coach at College of the Desert, head coach of the Pori Bears (in Finland) and then his career took a solid right turn.

He went to work for Hal Mumme as offensive line coach and offensive coordinator (mostly a figure head under Mumme) at Iowa Wesleyan. They jumped to Valdosta State and then Kentucky.

In 1999 he went to work for Bob Stoops in his first season at Oklahoma as offensive coordinator.

The 7-5 record and unorthodox offense got him the Texas Tech head coaching job, where he went 84-43 before being asked to leave after an accusation of abuse by Adam James, son of Craig James who was at the time an analyst for ESPN and he used that job to criticize Leach.

Tech officials said they gave Leach a director order to apologize. He refused and then sued the school and lost.

Leach was out of the game for two years, spending one working with CBS, before landing the Washington State job, a tough place to recruit to and even harder to win.

He went 55-47 in his eight seasons. His name was often linked to openings during his time in Pullman, even Arkansas. But with the welcome mat apparently wearing thin at WSU, he surprised most by taking the Mississippi State job.

From the outside looking in, it looked like a strange pairing.

State is a conservative school made up of hard workers.

Leach never met a subject he would not or could not discuss. Nothing about him says conservative.

The Bulldogs have been competitive for years and even though they has an all-time losing record, they have gone to a bowl game every year since Dan Mullen’s first season in 2009.

In last year’s covid-19 season, the Bulldogs were 4-6 and with all requirements for minimum number of wins won the Armed Forces Bowl.

That season was highlighted by beating defending national champion LSU and this season Leach and the Bulldogs have picked up where they left off.

They are 5-3 and two of their losses were a little surprising. They lost to Memphis 31-29, LSU (before Ed Orgeron and the Tigers decided to divorce) 28-25 in Starkville and the customary loss to Alabama.

The Bulldogs beat Texas A&M the week after the Aggies lost to the Razorbacks, destroyed Vanderbilt and beat a good Kentucky team 31-17 last Saturday. They opened the season with wins over Louisiana Tech and North Carolina State.

Leach and Co. are riding a two-game winning streak in Fayetteville.

Bulldog quarterback Will Rogers leads the SEC in passing and is coming off a 36-of-39 performance against the Wildcats. His 92% completion rate is a single-game SEC record.

Defending the pass has not been Arkansas’ strength, but the Razorbacks have had two weeks to prepare for Rogers, who likes to throw under the coverage.

The Hogs are favored, but the only thing they can count on is the pirate hates candy corn and loves to throw the ball.