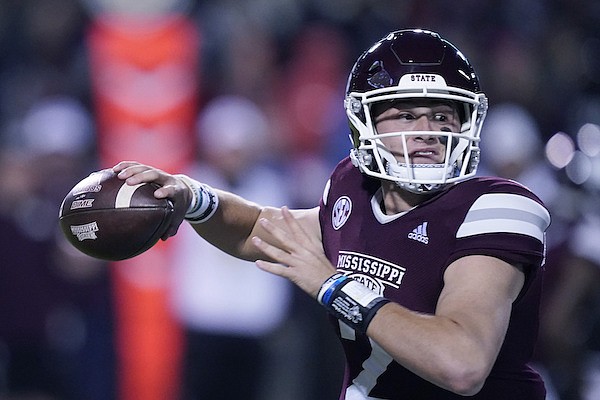 FAYETTEVILLE — There is one college football team that has beaten three opponents currently ranked in The Associated Press or USA Today coaches polls.

It’s an SEC team, but not Georgia — No. 1 in the first College Football Playoff poll released Tuesday night — or No. 2 Alabama.

Mississippi State, picked to finish last in the SEC West in a preseason media poll, comes into Saturday’s game at the University of Arkansas with victories over nationally-ranked North Carolina State, Texas A&M and Kentucky.

Mississippi State, ranked No. 17 in the CFP poll, outgained Kentucky 438-216 in total offense, had four takeaways without a turnover and held the ball for 41:10.

“They beat us in all phases,” Wildcats Coach Mark Stoops said. “I thought physically they played extremely hard.

“We didn’t match their intensity. I felt like we got pushed around. We weren’t able to run the ball. They ran the ball. They made competitive plays, out-coached us, out-played us.

“They kicked our butts.”

Bulldogs sophomore quarterback Will Rogers set an SEC record with a 92% completion rate (36 of 39) against Kentucky for 344 yards and 1 touchdown.

Rogers’ 327 completions are a Mississippi State season record, surpassing 316 by Dak Prescott in 2015.

“We had a slow start, but then we picked it up. I thought he did a good job elevating that.”

“They couldn’t effectively pass rush us with three guys,” Leach said. “They needed four to five, and we still protected. That makes them short handed on the back end.”

“Will is doing a really good job of running the offense,” Stoops said before Kentucky played Mississippi State. “You can see his comfort level going higher and higher and getting rid of the football and not putting them in such negative situations as you would in the first year in a program with a young quarterback.

“You see him playing at a very high level and getting to where they want to be.”

Running backs Joquavious Marks and Dillion Johnson, who have rushed for 252 and 248 yards, respectively, are also among the Bulldogs’ top three receivers.

“They’re very effective with it,” Arkansas Coach Sam Pittman said of the short passing game. “I think every throw is a run. On third-and-2 [against Kentucky] and it was just a flare to the back and a first down.”

The Bulldogs are third in the SEC in total defense (313.0 yards per game) and rushing defense (89.4). They held Kentucky to 71 rushing yards.

Linebacker Tyson Wheat has three sacks for 21 yards in losses and defensive end Randy Charlton has three for 15.

“Our defense was real active up front,” Leach said of the Kentucky game. “We felt it was important to affect the line of scrimmage on defense. We wanted to affect the quarterback. I thought the defensive linemen were able to do both of those things.”

Lideatrick Griffin is averaging 37.7 yards on nine kickoff returns. He had a 100-yard return for a touchdown to open the North Carolina State game and a 70-yarder against Louisiana Tech to help Mississippi State rally to win 35-34.

“He can take it home any second,” Johnson said after the North Carolina State game. “Any time he touches the ball, he’s a home run hitter.”

Leach was asked how the Bulldogs can build on beating Kentucky — their third victory in the past four games.

“We need to keep it in perspective,” Leach said. “We need to be excited about this win, celebrate this win … But we need to be real honest with ourselves.

“There will be plenty of places to improve. Then we need to be dedicated to do that. Arkansas is a really good team, and we need to play really well in order to beat those guys.”