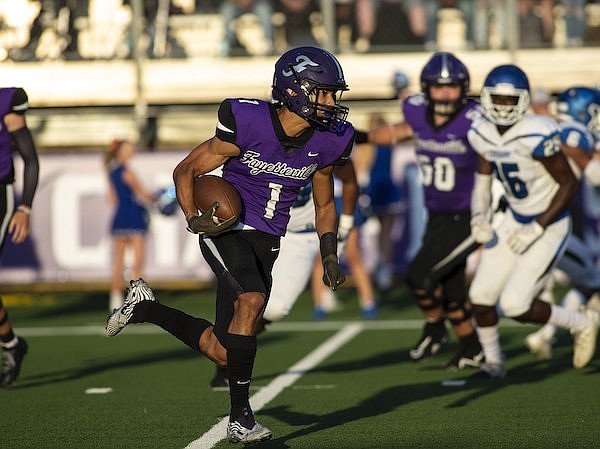 Fayetteville receiver Isaiah Sategna runs with the ball during a game against Conway on Friday, Aug. 27, 2021, in Fayetteville.

Fayetteville receiver Isaiah Sategna has flipped his commitment from Oregon to Arkansas.

The Razorbacks are the third team to receive a commitment from the ESPN 4-star recruit.

He moved to Fayetteville from Texas in January of his freshman year after his father, Mario Sategna, was hired as an Arkansas track assistant in July of 2018. He resigned his position in May.

Razorbacks Coach Sam Pittman and the progress of the program was key in his decision.

“About a month or two ago, I really began thinking about it – actually really whenever the season started,” Sategna said. “I really didn’t know how good they were going to be.

“I mean, they were in the bottom half of the rankings in the SEC, but Coach Pittman has proven he is one of the best coaches in the country. He has turned the program around.

“When I first got to Arkansas, they weren’t doing too good, had like a two-win season. But Coach Pittman is just fantastic and has really changed the culture here in Arkansas and is bringing in high-level recruits. I couldn’t say no to that.”

“I think just from the job that Coach Pittman has done and the relationship he’s been able to build with Coach Pittman, Coach Guiton and Coach Briles ultimately led to his decision," Dick said. "He felt comfortable enough to flip and go to Arkansas, which just speaks volumes about the job they’re doing getting out and recruiting kids and getting relationships with them."

Sategna is the state's leading receiver this season with 65 catches for 1,289 yards and 13 touchdowns.

He had 36 receptions for 700 yards and 6 touchdowns and was a first-team All-7A-West selection as a sophomore. He caught 41 passes for 814 yards and 7 touchdowns as a junior.

“It is pretty cool that the school that is like two minutes from you has a dude that is going to be going in the first round, a high-level pick at your position,” Sategna said. “It is just a lot of hope in the future.

“I really loved Oregon. I loved everything about it, and their coaches. I was really happy with being there and that’s why making the decision to go to Arkansas was so hard.

“And being also that I had de-committed before made it tough. But at the end of the day, I had to do what was best for me. I really liked Oregon, but I just feel like it is a better opportunity at Arkansas, so I just had to jump at that.”

Arkansas was the first to school to offer Sategna in March of his sophomore year.

“Coach Justin Stepp was the wide receiver coach when they offered and he was one of my favorite coaches,” Sategna said. “When Coach Guiton took over, I was like, ‘Oh, dang. I really liked Coach Stepp. How is this guy going to be?’

“Coach Briles and Coach Pittman just reassured me that Coach Guiton is that guy, another great coach and a great person to be around. I really liked Coach Guiton, so that was another factor in my decision in coming here.”

He is also an accomplished sprinter and plans to run track in college. Sategna won five individual titles and set state records in the 60-meter dash (6.86 seconds) and the 60-meter hurdles (7.88) at the Class 6A indoor state meet in 2020. His time in the 60 hurdles was the nation's fifth-best time that year, and he was named the Arkansas Gatorade male track athlete of the year.

His father won the 1994 SEC title and the 1995 NCAA title in the decathlon while his mother, Dahlia, was a standout sprinter for LSU and competed for Jamaica at the 1992 Olympics in Barcelona.

In 2019, Sategna won three outdoor state championships as a freshman. According to MileSplit, his 37.67 seconds in the 300 hurdles that year was the fifth-fastest freshman performance at the distance since 2000.

He will not be an early enrollee because he wants to try to break as many state records as he can.

“I am trying to go for nine,” Sategna said.

Sategna is looking forward to reporting to Arkansas next summer.

“Coach Pittman has just changed the culture, man,” he said. “Whenever he got here, he had good players, but they just weren’t performing the way they should have. Since he’s got here, he has change the whole program around.

“I feel like it was almost an embarrassment to go to Arkansas when he first got here, but now it is just a great thing to be going there. I am just so excited to get up there when I am done with track.”

He informed Pittman before tweeting his commitment to the Razorbacks.

“He was very excited about it and said it had been a long time coming. He was happy I finally made the right decision,” Sategna said.

Sategna is Arkansas’ 20th commitment for the 2022 class.