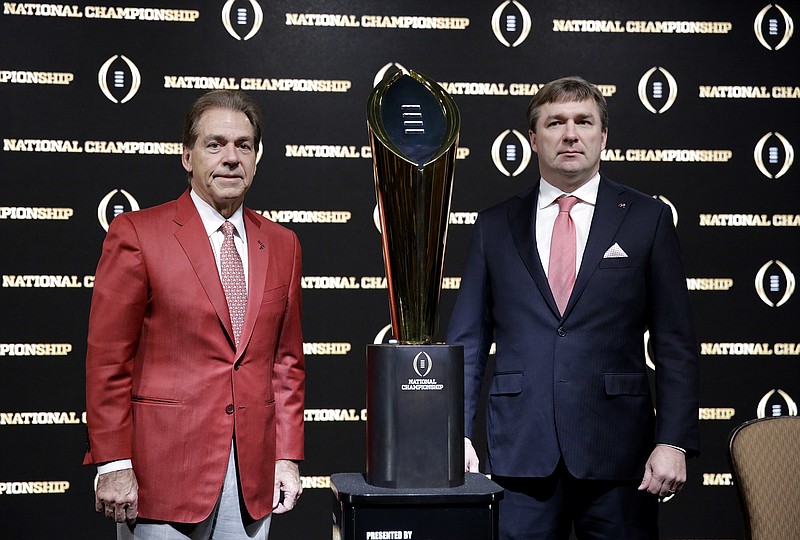 Those are three things most of the country is suffering heavy fatigue from.

The virus is up to the people. Vaccinate or let it live a long and deadly life. The way smallpox and polio were eradicated was vaccines.

A friend says if we had to pay all of our taxes on April 15 — state, federal, food, gas, personal property and the list goes on and on — there would be a revolt that would make the Boston Tea Party (no taxation without representation) seem like a tea party.

As for Alabama football, the only answer seems to be for Nick Saban to retire.

The initial College Football Playoff rankings were announced Tuesday evening, and it was Georgia No. 1 and Alabama No. 2.

A lot of the sports writers across the country screamed bias.

All in all, the SEC had seven teams ranked, although five of them have about as much chance of making the Final Four as apparently Cincinnati does.

The undefeated Bearcats — the same team that beat No. 10 Notre Dame in front of touchdown Jesus — were ranked No. 6.

Cincinnati has one semi-quality opponent left, SMU. A win and an undefeated season may not be enough because the American Athletic Conference got little respect from the selection committee.

For the Bearcats to get in now they have to hope Oregon loses again, which in the weak Pac-12 it may not, and that No. 3 Michigan State and No. 5 Ohio State both lose two more games. One of them is guaranteed a loss when they play Nov. 20.

The Buckeyes also close the season at Michigan, a better team than it showed in its choke loss to the Spartans on Saturday.

Michigan State closes the season at home with Penn State, which has been more of a pretender than contender.

It doesn’t matter which one makes it to the Big Ten championship, they will win.

A couple of interesting rankings was the ACC got little respect with Clemson being a nonfactor this season.

The highest team was No. 9 Wake Forest. Yes, the Demon Deacons are undefeated.

Just ahead of Wake was No. 8 Oklahoma which is undefeated, and unless Oklahoma State can rain on the Sooners’ parade, will finish that way.

The Sooners’ ranking isn’t really surprising. They can’t help it that for now they are shackled to the Big 12 which has two other quality teams, the No. 11 Cowboys and the No. 12 Baylor Bears.

OU gets Baylor next Saturday and closes with the Cowboys, although there is a semi-dangerous game with Iowa State sandwiched in there.

What seems the most certain, and probably the scenario the selection committee sees playing out, is that if Alabama loses to Georgia in the SEC Championship Game, the Crimson Tide will slip to No. 4 and play the Bulldogs in the first round of the playoffs, assuring America those teams won’t meet in the National Championship Game.

So what the first poll did was give us five teams most likely to make the playoffs, with Oregon being No. 4, one spot ahead of the Buckeyes just as it should have been since the Ducks beat Ohio State.

The Ducks finish at Washington, home for Washington State, at Utah and home with Oregon State.

Most likely the first game of the playoffs will be Alabama-Georgia, and the Bulldogs would have most of the fatigued nation pulling for them, and Oregon-Ohio State.

This is why the College Football Playoffs and ESPN are talking about expanding to a 12-team playoff.

First, that’s a ton more money in the bank for the Power 5 schools and would put more of their schools in the playoffs, and only one team like Cincinnati.