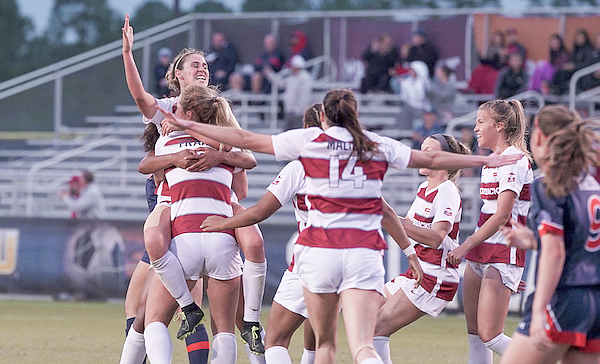 Arkansas players celebrate a goal during an SEC Tournament game against Auburn on Thursday, Nov. 4, 2021, in Orange Beach, Ala.

Kayla McKeon scored two goals and added an assist to help the top-seeded Razorbacks take control with a late flurry en route to a 5-1 win over fifth-seeded Auburn in the semifinals Thursday evening in Orange Beach, Ala.

Arkansas, ranked fifth nationally in the latest United Coaches Poll, will look to snap a string of five consecutive losses in tournament finals and will play its sixth different opponent.

Ava Benedetti and Bea Franklin chipped in a goal and an assist each for Arkansas, which out-shot Auburn

McKeon helped the Razorbacks take a 2-0 lead. She scored in the 41st minute to break a scoreless tie and Arkansas led 1-0 at halftime.

She then another goal high into the right side of the goal off a free kick two minutes into the second half.

Auburn (12-6-1) answered a minute later on a goal by Sydnie Thibodaux to get within 2-1, but the Tigers wouldn’t score again. Arkansas sealed the deal with three goals in a seven-minute span in the second half.

McKeon picked up the assist on Taylor Malham’s eighth goal of the season. Van Fitch assisted on each of the Razorbacks’ last two goals. She fed Franklin, whose header found the back of the net for a 4-1 lead.

The Razorbacks out-shot Auburn 18-8, but the Tigers had just two shots that were on frame.