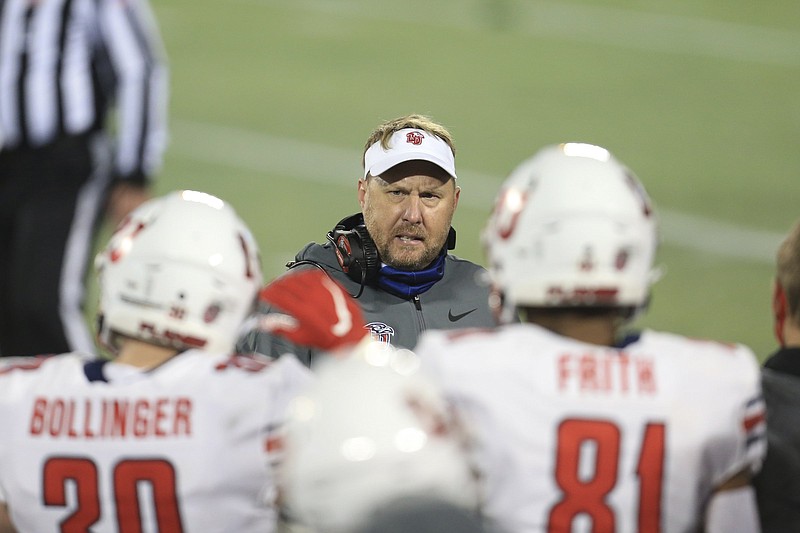 Liberty Coach Hugh Freeze, who was the coach at Ole Miss in 2012-16, returns to Oxford, Miss., to face the Rebels on Saturday. (AP/Matt Stamey)

When Ole Miss and Liberty in 2017 agreed to play in a home game for the Rebels in 2021, there was no way of knowing Hugh Freeze would be on the visiting sideline for Saturday’s matchup at Vaught-Hemingway Stadium.

After sitting out of coaching for two seasons, Freeze was hired in 2019 at Liberty, which he quickly has turned into one of the top mid-major programs in the country.

So what five years ago figured to be an easy victory for Ole Miss is hardly a break from SEC play.

“I would like this to be some opponent that you had never heard of before that didn’t have a first-round draft pick quarterback,” Rebels Coach Lane Kiffin said, referring to Liberty senior Malik Willis, a transfer from Auburn. “That would be nice, but it’s basically like having another SEC game.”

Freeze said playing the No. 16 Rebels will probably be the toughest game in his three seasons at Liberty.

“The strangest thing will be being in the visitors locker room and on the visitor sideline,” Freeze said.

Freeze said he’s choosing to remember the good times he had at Ole Miss, including two victories over Alabama and beating Oklahoma State in the Sugar Bowl.

“Man, there were a lot of great wins in that stadium that I have great memories of,” Freeze said. “I appreciate the people there. They’re good people and happy that they’re winning again and competing again like I knew you could there.

“But there will be some different feelings for sure.”

The top four teams in the first College Football Playoff poll announced Tuesday night all are coached by members of the 2015 Alabama staff.

No. 1 Georgia is coached by Kirby Smart, who was the Crimson Tide’s defensive coordinator in 2015. Nick Saban is the coach of No. 2 Alabama, as he has been since 2007.

Mel Tucker, coach of No. 3 Michigan State, was the Tide’s defensive backs coach in 2015. Mario Cristobal, coach of No. 4 Oregon, was Alabama’s offensive line coach.

Kiffin is at Ole Miss, which is ranked No. 15 in the CFP rankings.

Napier is the coach at Louisiana-Lafayette, which isn’t in the CFP poll but is No. 24 in The Associated Press poll.

“We’ve always had success here because of the people in the organization, and that most certainly starts with the coaching staff that we’ve had,” Saban said. “We’ve had some fantastic coaches here that have done an outstanding job with our players.

“It’s no surprise to me that they’re doing extremely well in their own programs now, and I think actually do have some of the best teams in the country.”

Saban and his five assistants from the 2015 staff who are now head coaches lead teams that are a combined 43-5 this season.

“It’s probably not a coincidence,” Smart said. “It probably comes from where you’re coaching at, how fertile your recruiting area is.

“When you win, you have people on your staff that get jobs. So, No. 1, you’ve got to recruit well and you’ve got to win to get that opportunity.”

Missouri receiver Barrett Banister, a senior from Fayetteville, is the Tigers’ nominee for the Burlsworth Trophy, which is named in honor of the late Brandon Burlsworth, a University of Arkansas offensive lineman who went from walk-on to All-American in 1998.

The Burlsworth Trophy is presented to the top college football player who began his career as a walk-on.

“Being from Arkansas and knowing Brandon’s story, I think he’s a great representation of that,” Missouri Coach Eli Drinkwitz said. “Very similar to Brandon’s story in coming here, Barrett earned a scholarship and has worked his way into being a pivotal part of our offense.”

Banister has 17 catches for 125 yards and 1 touchdown this season.

“He plays in every game and plays multiple positions and does all the dirty work,” Drinkwitz said. “Never complains. Is a good team leader.”

“He blocks well on the perimeter,” Drinkwitz said. “He knows everybody’s assignments, so he helps the young players get lined up.

“He’s in the weight room encouraging people. He’s helping clean the locker room. He does all the different things that nobody else sees.”

Arkansas defensive coordinator Barry Odom was Missouri’s coach when he recruited Banister as a walk-on and put him on scholarship as a redshirt freshman in 2018.

Banister’s career totals for the Tigers include 79 receptions for 715 yards and 2 touchdowns.

The road team is 8-1 in the Auburn-Texas A&M series since 2012 when the Aggies joined the SEC.

Texas A&M will be looking for its first home victory over the Tigers when they play on Saturday at Kyle Field, where Auburn is 4-0.

While the Aggies have struggled to beat Auburn at home, they’re 4-1 at Jordan-Hare Stadium.

“It was like that when I was at Auburn,” Texas A&M Coach Jimbo Fisher said. “We had the Georgia series like that.”

When Fisher was an Auburn assistant from 1993-98, the road team was 4-1-1 when the Tigers played Georgia.

“It happens like that sometimes,” Fisher said. “Hopefully that’ll break this week, but we’re going to have to play great.”

Bryan Harsin, in his first season as Auburn’s head coach, said winning at Texas A&M in the past probably is a plus for current players who experienced it, but that he hasn’t made the Tigers’ 4-0 road record against the Aggies a rallying cry this week.

“This team doesn’t have that memory,” Harsin said. “So we’ve got to go and try to create that and try to find a way to win and do it there traveling to a tough environment.

“It’s really about what we have to do now to go out and play good football against A&M.”

These are tough times for Florida Coach Dan Mullen less than a year after the Gators were among the top teams nationally before finishing with losses to LSU, Alabama and Oklahoma.

Mullen, whose Gators are 2-7 in their last nine games against Power 5 conference opponents, is getting bashed by many in the media and has infuriated some Florida fans by his comments that make it sound as though he doesn’t take recruiting as seriously as he should.

After No. 1 Georgia pounded Florida 34-7 last Saturday, Matt Baker of the Tampa Bay Times wrote an article detailing all of the Bulldogs who made key plays and signed with Georgia over Florida.

When Mullen held his weekly news conference on Monday, the first question was about recruiting, and he winced when he heard it, then quickly dismissed it.

“We’re in the season right now,” Mullen said. “We’ll do recruiting after the season. When it gets to recruiting time, we can talk about recruiting. OK? Next question.”

Mullen tried to do some damage control on Wednesday’s SEC coaches’ teleconference.

“First, I’d like to touch on something for all the Gator Nation, all our great fans, of something that was taken out of context in Monday’s press conference as it pertains to recruiting,” Mullen said. “Our staff recruits nonstop. We grind at recruiting every day.

“We’re always recruiting and working the best to get great players that fit the Gator standard and bringing them here to our program. And, as I said on Monday, we just weren’t going to get into the specifics of everything we do in recruiting and how we do all of that until after the season.”

Mullen’s statement still might not sit well with Florida fans considering that according to The Athletic the Gators’ recruiting class is ranked No. 22 nationally while Georgia’s is ranked No. 1.

Over the previous four seasons, The Athletic reported, Georgia has signed 31 five-star recruits to five for Florida during a span when Mullen and his staff went head-to-head with Georgia Coach Kirby Smart and his staff, often for the same players.

That might help explain Florida’s 1-3 record against Georgia under Mullen.

“There’s no coach out there who can outcoach recruiting,” Smart said after the Florida-Georgia game. “I don’t care who you are. The best coach to ever play the game better be a good recruiter because no coaching is going to out-coach players.”

LSU Coach Ed Orgeron didn’t use any coach speak when asked at his weekly news conference about the team’s self-scouting during last week’s open date.

Instead, Orgeron, who will be out as the Tigers’ coach when this season ends, was brutally honest about his 4-4 team on offense and defense.

“We’re very, very predictable on defense. We need to have more of a variety on first down. We give them the same looks over and over again. There’s not much disguise. What we line up in, we’re in.”

Orgeron said with it being this late in the season, it’s tough to make wholesale changes for Saturday night’s game at Alabama.

“So we had an adjustment period all last week and this week we’ve been doing it. We’re really, really honing in on being in the right place at the right time.”

Badie has been a workhorse for the Tigers’ offense. He has 157 carries for 989 yards and 11 touchdowns and 40 receptions for 305 yards and 4 touchdowns.

With Missouri quarterback Connor Bazelak questionable for Saturday’s game at No. 1 Georgia because of a hip injury, Badie’s ability to run the ball will be needed more than ever.

But it figures to be rough going on the ground against the Bulldogs, who are holding opponents to 75.6 rushing yards per game and 2.5 per carry.

The Aggies (6-2) will look to extend their winning streak to four games, but Auburn (6-2) has proven to be tough on the road in SEC play this season with victories at LSU and Arkansas.

The Tigers will try and get another big road victory at Texas A&M, where Alabama lost earlier this season.

Auburn quarterback Bo Nix’s improvement on the road has been a key for the Tigers’ success away from Jordan-Hare Stadium as he has made plays with his arm and legs and limited turnovers.

The Aggies need to get some pressure on Nix from defensive end Tyree Johnson, who has five sacks in the previous three games.

419 — Consecutive games in which Florida has scored. Emory Jones extended the NCAA-record stretch with a 2-yard touchdown run with 2:49 left in Georgia’s 34-7 victory over the Gators.

1,306 — Career receiving yards by Jalen Wydermyer to set a record for a Texas A&M tight end.

“We’re competitors, man. We’re going to compete. Everybody wants to compete. You want to test yourself against the best. You’ve got to just go cut it loose.”

“They beat us on our home turf, and we feel like we’ve got to respond to that.”

— Alabama RB Brian Robinson on the Crimson Tide’s motivation against LSU for Saturday night’s game after the Tigers won 46-41 at Bryant-Denny Stadium in 2019.

“Auburn probably is playing as good as anybody in the league right now.”