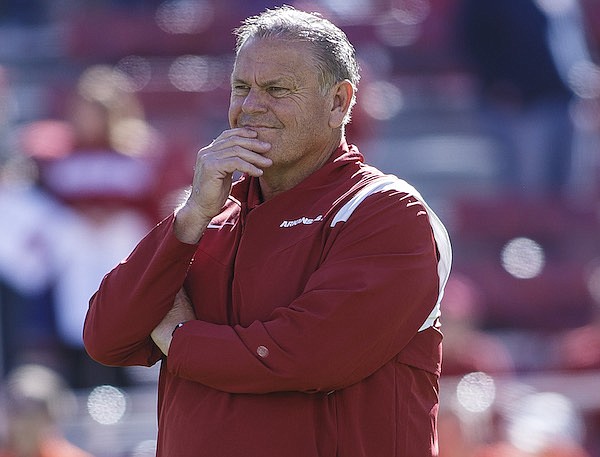 Arkansas coach Sam Pittman is shown prior to a game against Auburn on Saturday, Oct. 16, 2021, in Fayetteville.

RADIO Razorback Sports Network can be accessed through local FM and AM affiliates, via the Arkansas Razorbacks Gameday app, via the TuneIn app or on ArkansasRazorbacks.com. Blackouts may apply. The Arkansas radio broadcast will be carried on SIRIUS/XM Ch. 135 and 191.

TELEVISION The game will be televised by SEC Network and can be streamed on the ESPN app or WatchESPN.com. (carrier login required).

WEATHER According to the National Weather Service, Saturday will be sunny with a high of 62 degrees and a low of 41 degrees in Fayetteville.

NOTABLE The Razorbacks are one win away from bowl eligibility with four games left in the season …The Hogs have not won six games in a season since 2016 when they won seven games…Arkansas is 4-1 at home this season with the loss coming against Auburn…Razorback receiver Treylon Burks leads the SEC in receiving yards and receiving yards per game with 717 and 89.6…The Hogs have the top-ranked third-down defense in the SEC and are allowing opponents to convert 27.9% of the time…The Bulldogs picked up their second victory over a ranked team this season last week, defeating then-No.12 Kentucky…Mississippi State’s defense has held consecutive SEC opponents to fewer than 50 plays…Mississippi State quarterback Will Rogers broke the SEC single-game completion percentage record against Kentucky, connecting on 92.3% (36 of 39) of his attempts, and was one attempt shy of qualifying for the FBS record.