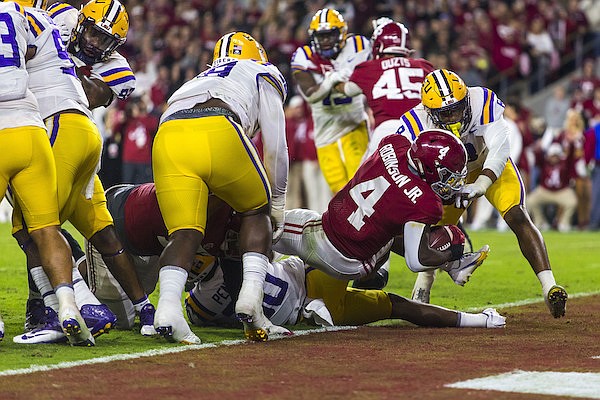 Alabama running back Brian Robinson Jr. (4) falls into the end zone for a touchdown against LSU during the first half of an NCAA college football game, Saturday, Nov. 6, 2021, in Tuscaloosa, Ala. (AP Photo/Vasha Hunt)

TUSCALOOSA, Ala. — Bryce Young passed for 302 yards and No. 2 Alabama's defense came up with enough big plays for a 20-14 victory over heavy underdog LSU on Saturday night.

The Crimson Tide (8-1, 5-1 SEC) preserved their national championship hopes in a game that was as tight as some meetings when both were nursing such ambitions. The injury-depleted Tigers (4-5, 2-4) and lame-duck coach Ed Orgeron didn't act like 29.5-point underdogs.

It wasn't over until the final play, a Hail Mary that fell incomplete in the end zone. The Tigers came up empty in three fourth-quarter trips into Alabama territory, including that quick venture to the 30 in the final minute.

Young, the Heisman Trophy front-runner, completed 24 of 37 passes with a couple of touchdowns, including a 58-yarder to Jameson Williams. Williams caught 10 passes for 160 yards. LSU harried Young all night and held Brian Robinson Jr. to 18 yards on 13 carries.

But Alabama returned the favor with Will Anderson Jr. racking up 12 tackles, 1 1/2 sacks and four tackles for loss.

Max Johnson completed 16 of 32 passes for 160 yards with two touchdowns and an interception for LSU. Tyrion Davis-Price ran for 104 yards.

Cameron Lewis gave LSU the ball back in Alabama territory after ripping the ball from Young with 3:25 left. Johnson's fourth-down pass fell incomplete, but the Tigers got another chance with 50 seconds left.

Ahead for most of the first half, LSU had pulled to 20-14 on Johnson's 8-yard touchdown with 2:27 in the third quarter. The Tigers converted two fourth-down plays on the 14-play, 89-yard drive.

Alabama had missed an extra point earlier, so LSU later had a chance to take the lead several times late.

The Tide defense held on four straight plays after the Tigers got first and goal from the 8. Replay overturned a Johnson fumble, but his fourth-down pass sailed over the head of Trey Palmer.

COLLEGE STATION, Texas — Micheal Clemons scored the game’s only touchdown on a 24-yard fumble return early in the fourth quarter, and No. 14 Texas A&M beat No. 13 Auburn 20-3 on Saturday.

Clemons’ scoop-and-score came after defensive tackle Jayden Peevy poked the ball away from scrambling Auburn quarterback Bo Nix. Clemons, a 6-foot-5, 270-pound defensive end, picked up the ball and sprinted to the end zone, diving to the ground after he crossed the goal line.

Zach Calzada finished 15 of 29 for 192 yards for Texas A&M (7-2, 4-2 SEC), shaking off an apparent injury to his left, non-throwing shoulder in the third quarter. His performance was good enough for the Aggies to survive a defensive battle between the two highest-ranked two-loss teams in the country.

Auburn (6-3, 3-2) had its four-game winning streak in College Station snapped.

Calzada woke up the crowd of 109,835 — the second-largest in Kyle Field history — with a 49-yard completion to Caleb Chapman late in the third quarter, setting up a 29-yard field goal by Seth Small that gave the Aggies a 6-3 lead.

Small put the Aggies up 9-3 with a 47-yard field goal with 13:40 remaining before the Aggies’ defense finally found the end zone. Small connected again from 37 yards with 3:15 remaining.

Small opened the scoring midway through the first quarter on a 21-yard kick, and Auburn answered with Anders Carlson’s 32-yard field goal late in the quarter.

Both Small and Carlson missed midrange field-goal attempts that would have broken the 3-3 tie.

Texas A&M lost its first two SEC games before shocking then-No. 1 Alabama to begin a four-game winning streak. Now the Aggies are in the hunt to represent the SEC West in the conference championship game if they win out. Their remaining opponents are Ole Miss, Prairie View A&M and LSU.

ATHENS, Ga. — With Missouri gearing its defense to stop the run, No. 1 Georgia relied on big plays in a passing game that was boosted by the return of quarterback JT Daniels.

Stetson Bennett passed for 255 yards and two touchdowns before giving way to Daniels, the former starter, leading the Bulldogs to a 43-6 win over Missouri on Saturday.

The game opened new questions for Georgia at quarterback while affirming the Bulldogs' season-long defensive dominance. Missouri was held to 273 total yards in Georgia's seventh game of the season allowing no more than 10 points.

The Bulldogs completed 4 passes of 31 yards or longer, and 7 for at least 15 yards. Wide receivers Jermaine Burton, who had a 47-yarder, and Arian Smith, who had a 35-yard scoring catch from Bennett, have returned from injuries to boost the unit's depth.

As usual, Georgia's defense led the way. The Bulldogs began the day leading the nation with 6.6 points allowed per game. Jamon Dumas-Johnson and Travon Walker had sacks.

Daniels opened the season as Georgia's starter before missing more than a month with a lat injury. He came off the sideline midway through the third quarter. His 7-yard scoring pass to Ladd McConkey gave Georgia a 40-3 lead.

Daniels' second possession ended with an interception by Missouri defensive back Jaylor Carlies.

Missouri (4-5, 1-4) also could have ongoing questions at quarterback.

Tigers starter Connor Bazelak, who left last week's win over Vanderbilt with what Drinkwitz called a “soft tissue” injury, was with the team but did not play.

Freshman quarterback Tyler Macon passed for 74 yards and ran for 42 in his first start. He shared time with Brady Cook, who threw for 78 yards.

Harrison Mevis kicked a 36-yard field goal in the first quarter to give Missouri a 3-0 lead, leaving him 12 for 12 this season before his third-quarter attempt from 48 yards hit the left upright and was no good.

LEXINGTON, Ky. — Hendon Hooker threw a career-high four touchdown passes, including a 6-yard insurance score to Cedric Tillman early in the fourth quarter, and Tennessee held off No. 18 Kentucky 45-42 on Saturday night to halt a two-game losing streak.

The Volunteers (5-4, 3-3 SEC) emerged from a bye to strike quickly in a back-and-forth game between border rivals that totaled 1,073 yards combined. They needed just three plays and 37 seconds to score their first two TDs, drove 35 yards in 16 seconds for a go-ahead field goal before halftime, and ticked off only 37 seconds on the way to another go-ahead touchdown in the third quarter.

Hooker's final TD to Tillman with 11:40 remaining proved to be the biggest as Kentucky (6-3, 4-3) got within a field goal on Will Levis' 24-yard touchdown toss to Izayah Cummings. The Wildcats got one last chance after Chase McGrath's missed field goal but couldn't take advantage, turning the ball over on downs with 29 seconds left.

It was Tennessee’s first win over a ranked opponent since 2018, also against Kentucky.

Alontae Taylor came up with Tennessee's biggest defensive play with 6:23 left in the third, reading Levis perfectly to jump a route for a 56-yard interception return for a touchdown that gave the Volunteers their first 10-point lead.

Kentucky pulled to 38-35, but Hooker answered with a 6-yard scoring pass to Tillman that provided breathing room.

Hooker completed 15 of 20 passes for a career-best 316 yards with TDs to Javonta Payton, Velus Jones Jr., tight end Jacob Warren and Tillman. Jabari Small rushed for a 37-yard TD as Tennessee bounced back from losses to then-No. 13 Mississippi and then-No. 4 Alabama, avoiding consecutive losses to Kentucky for the first time since 1976-77.

Levis threw for 372 yards and three touchdowns for Kentucky, which stayed competitive with several long, time-consuming drives. He also ran for two scores. But the Wildcats’ defense couldn’t slow Hooker or the Volunteers’ high-speed offense, which scored on three consecutive second-half possessions to stay ahead.

Kevin Harris and ZaQuandre White each ran for over 100 yards, receiver Josh Vann had 7 catches for 111 yards and a touchdown and kicker Parker White had a career-high 4 field goals for South Carolina (5-4, 2-4 SEC) in pummeling the Gators (4-5, 3-4)

Brown became the Gamecocks' third starting passer this season and the FCS transfer made his first SEC start an eye-opening one.

Brown, who last played at St. Francis, steadily led South Carolina on five first-half scoring drives for a 30-10 lead at the break.

The Gamecocks' defense did the rest, holding the normally fiery Florida offense to just 82 yards rushing and becoming the first team this season to outgain the Gators, 459-340.

Brown looked like an SEC veteran as he filled in after grad-assistant coach turned quarterback Zeb Noland continued his recovery from knee surgery last week. It's probably not Brown's last start at South Carolina after what he showed in this one.

Brown had a 50-yard pass to Vann to open a series with the Gamecocks up 13-10 and closed it with a 24-yard toss to a wide-open Vann in the end zone to increase the margin.

Brown had consecutive passes to tight ends Traevon Kenion and Nick Muse that went for 18 and 17 yards that led to White's third first-half field goal for a 23-10 lead.

Moments later, Florida quarterback Emory Jones was tackled from behind by Aaron Sterling for a fumble that bounced backward to the feet of lineman Jabari Ellis who rumbled into the end zone with 1:13 left in the half and the Gamecocks, 20.5 point underdogs, went ahead by 20 points.

Jones completed 17 of 30 passes for 258 yards and two touchdowns. He also threw an interception and the fumble that went for a score.

OXFORD, Miss. — The return of Hugh Freeze to Mississippi was met with little fanfare and a matter-of-fact victory by the Rebels.

Matt Corral threw for 324 yards and a touchdown to lead No. 15 Ole Miss past Liberty and the former Rebels coach 27-14 on Saturday.

Corral continued to build a Heisman Trophy resume, completing 20 of 27 passes, including six completions of 20-plus yards.

The Rebels (7-2) raced to a 24-0 halftime lead, highlighted by a 70-yard touchdown run by Jerrion Ealy on the game’s second play.

Freeze coached the Rebels from 2012-16 to considerable success, including two victories against Alabama, before being forced to resign amid scandal. It was discovered during a lawsuit against the related to an NCAA investigation that Freeze made phone calls to a female escort service while on work-related travel.

Ole Miss was also hit with NCAA sanctions for recruiting and academic violations that happened under Freeze.

Freeze downplayed his return leading up to the game and the less-than-capacity crowd didn’t have much reaction to his return to Oxford.

Ealy rushed for 115 yards in 10 carries and added another 4-yard touchdown run as the Rebels built the insurmountable first half advantage.

Liberty (7-3) was led by Malik Willis, who ran for a 3-yard touchdown and finished 16 of 25 for 173 yards, but threw three interceptions.

The Flames had 457 total yards, primarily in the second half, including seven rushes for 101 yards, with a 28-yard touchdown run by Shedro Louis.