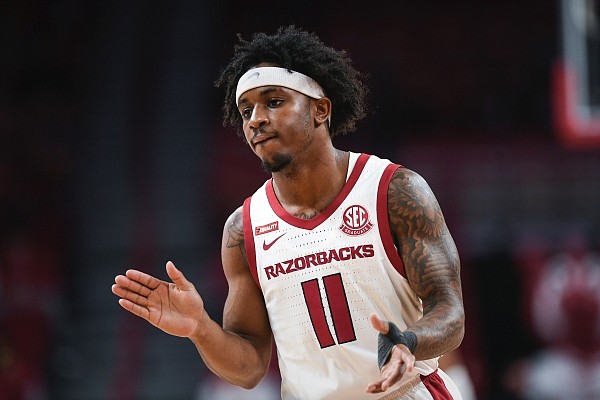 Everything you need to know about the players on the Razorbacks' roster in 2021-22:

THE SKINNY Umude is a graduate transfer from South Dakota, where he played for four seasons. … Was named first-team All-Summit League twice including last season. … Graduated in spring 2021 with a general studies degree. … Has scored 1,520 career points with 549 rebounds. … Has scored in double-figures in 71 of 75 starts over his career. … Recorded five double-doubles last season.

LAST SEASON Averaged 12.8 points, which ranked third on the team, and 1.44 steals per game.

THE SKINNY After sitting out the 2019-20 season after transferring from Jacksonville, Notae was named the Bleacher Report National Sixth Man of the Year last season and the SEC Coaches Sixth Man of the Year. … Scored 21 points to go with 5 rebounds, 5 assists and 5 steals against South Carolina, the first Razorback to produce those numbers in a game since 1997. … Scored 27 points against Missouri in the SEC Tournament. … Scored 14 points in the Elite 8 game against national champion Baylor.

THE SKINNY Was ranked the 36th best incoming freshmen by 247Sports.com. … Played high school basketball at both Bryant and Episcopal Collegiate in Little Rock before transferring to Oak Hill Academy for his senior season. … At Oak Hill, averaged 10.7 points, 7.5 assists, 4.8 rebounds and 3.7 steals per game. … At Bryant, averaged 18 points and 4 rebounds per game as a junior, and was named all-state as a sophomore at Episcopal Collegiate. … Was named 2020 All-State by MaxPreps Virginia as a senior at Oak Hill. … Played a season-high 21 minutes against Lipscomb before his injury.

THE SKINNY This is Wade’s fourth college after playing one season each at South Plains (Levelland, Texas) Junior College and UTEP. … Played two seasons at Wichita State, starting 47 games. … Graduated last spring from Wichita State with a general studies degree. … Pursuing a master’s degree in adult and lifelong earning at the University of Arkansas.

LAST SEASON Averaged 12.3 points and 6.7 rebounds per game in the post-season.

THE SKINNY Had an immediate impact as a true freshman last season, starting the last 14 games of the season. … Hit the game-winning shot against Oral Roberts in the Sweet 16. … Names to the SEC First-Year Academic Honor Roll. … Had 20 points, 7 rebounds, 6 assists and 2 steals against Georgia. … Had 15 points and 6 rebounds against Texas Tech in the NCAA Tournament. … In addition to hitting the game-winning shot against Oral Roberts, also scored 16 points with 8 rebounds. … Scored 14 points in the Elite 8 game against Baylor. … Was named all-state 4 times at Jacksonville High School and a two-time All-Democrat-Gazette First Team selection.

LAST SEASON Averaged 14.4 points and 5.9 rebounds per game at Pittsburgh.

THE SKINNY Played three seasons at Pitt, averaging just under 10 points per game over his career with the Panthers. … In a win against Duke last season, Toney scored 22 points and had 11 rebounds. … Has scored 763 points in his collegiate career with 423 rebounds. … Averaged 9.5 points and 4.9 rebounds per game as a sophomore and scored in double-figures 14 times. … Played at Huntsville (Ala.) Columbia high school as a freshman and Northwood (NC) Temple as a sophomore in high school before playing his final two prep seasons at Fayetteville (NC) Trinity Christian, where he was named a National Athletic Association of Private Schools Division 4 All-American and Division 4 Player of the Year.

THE SKINNY Had a big impact off the bench as a true freshman, coming off the bench three times to pull down 10 rebounds. … Started 5 games. … Named to the SEC First-Year Academic Honor Roll. … Was invited to Team USA U19 Camp this summer. … Had 7 points, 10 rebounds and 2 steals against LSU. … In the Elite 8 game against Baylor, was 4-of-5 from the field and had 4 rebounds and a blocked shot. … Was rated the 56th best freshman in the nation by rivals.com. … Was the 2020 Gatorade Player of the Year in Arkansas and the 2020 Northwest Arkansas Democrat-Gazette Division I Player of the Year in leading Fort Smith Northside to the Class 6A state championship.

LAST SEASON Averaged 15.4 points at the University of Miami.

THE SKINNY Spent four seasons at the University of Miami before coming in as a grad transfer this season. … Graduated from Miami in the spring with a degree in arts and sciences. Pursuing a master’s degree in sports administration/marketing. … Scored 1,256 career points and 251 assists. … Has made 163 career 3-pointers. … Was named to the All-ACC preseason team. … Played just two games last season before suffering an ankle injury. … Was named to the All-ACC Academic team three times. … Was the 2016 Washington DC Gatorade Player of the Year.

THE SKINNY Rated as a four-star recruit and the No. 84th ranked player nationally by ESPN. … Was rated the No. 4 overall recruit in Georgia. … Was nominated to the McDonald’s All-America game. … Played at Holy Innocents Episcopal High School and Chamblee High School prior to McEachern. … Averaged 21.7 points and 5.8 rebounds at McEachern as a junior in helping the team reach the Georgia Class 7A state semifinals. … Was named to the Atlanta Journal Constitution Class 7A all-state second team. … Also named to the AJC All-Metro Cobb County team.

LAST SEASON Played in 14 games at Texas A&M with a season-high of 7 rebounds against LSU.

THE SKINNY Started 4 games for the Aggies last season, scoring 6 points in three different games. … Robinson was rated a four-star recruit by 247sports.com, ESPN and Rivals.com coming out of Ada High School. … Averaged 15.4 points, 5.6 rebounds and 2.5 assists per game as a junior at Ada, helping the team reach the Class 4A state tournament berth and a 21-6 record.

LAST SEASON Averaged 11 points and 6.7 rebounds per game at Arkansas-Little Rock as a sophomore before transferring to Arkansas. He sat out last season.

THE SKINNY Was named to the third-team on the 2020 All-Sun Belt team. … He was named Sun Belt Conference Player of the Week twice. … Started 28 games for the Trojans as a sophomore. … Scored in double-figures in 15 games. … Had career highs of 32 points and 16 rebounds against Arkansas State, and scored 30 points with 13 rebounds against UT-Arlington. … Started 15 games as a freshman at UALR. … Played two seasons at Montverde Academy in Florida, leading the team to a state championship. Transferred to Holy Spirit Prep as a senior, where he averaged 17 points and 9 rebounds per game. … His older brother Dakari Johnson played at Kentucky.

THE SKINNY Arbogast origionally signed with Oregon, but transferred to Lane Community College, where he played one season that was shortened by covid-19. … Shot 45 percent from 3-point range. … Played high school basketball at De La Salle, where he was coached byu Justin Argenal, the brother of Arkansas assistant coach Gus Argenal. … Averaged 10 points, 3 rebounds and 2 assists at De La Salle.

THE SKINNY Played at Fayetteville High School before transferring to Link Year Prep for his senior season. … As a junior at Fayetteville, averaged 4 points and 3 rebounds per game for the Purple’Dogs.

LAST SEASON Started 27 games after sitting out the previous season after transferring from Cal.

THE SKINNY One of just three players nationally to have at least 50 blocked shots and 20 3-pointers in a season. … Recorded 51 blocked shots, which ranked third in the SEC. … Over the final 1o games of the regular season had 25 blocked shots. … Scored 23 points and had 8 rebounds in his first game as a Razorback against Mississippi Valley State. … Had 16 rebounds against North Texas. … Averaged 7.5 points and 3.0 rebounds as a freshman at Cal including a career-high 24 points against Stanford. … Played at Baptist Prep for three seasons before transferring to Findley Prep as a senior. … Led Baptist Prep to back-to-back state championships and scored more than 1,000 career points with 700-plus rebounds. … Was a member of the Team USA U16 and U17 teams and helped his team win a gold medal at the 2015 FIBA Americas championships. … His mother Robyn was a member of the Arkansas women’s basketball team from 1986-89.